Afghanistan is Drifting Toward Civil War. The Coronavirus Pandemic Makes One More Likely. 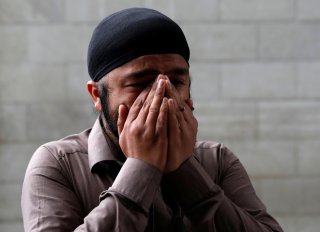 America has finally laid down the law in Afghanistan, where Ashraf Ghani and Dr. Abdullah remain mired in a dispute over last September’s presidential elections. On Monday, Secretary of State Mike Pompeo made an unannounced visit to Afghanistan as part of a bid to broker a deal between the Afghan leaders. Pompeo’s intervention failed. He then left the country announcing the reduction of U.S. aid to the country by $1 billion and threatening another $1 billion reduction the next year.

For over a year, the wily Ghani has played America like a fiddle. He has also outsmarted his political rivals and the Taliban. Ghani obtained international support for the ill-advised move to go forward with presidential elections. Then he not only rigged those polls in his favor, but also eventually moved forward with his presidential inauguration, leaving world powers with little choice but to recognize his government. And he has stifled multiple efforts at initiating an intra-Afghan dialogue process that would deny his government a lead role.

But like the Aesopian fox, Ghani has been too clever by half.

In all likelihood, this was America’s last major effort to end Afghanistan’s leadership crisis. By sabotaging Pompeo’s visit, Ghani has likely committed a fatal mistake. The U.S. withdrawal from Afghanistan will proceed as agreed with the Taliban, which have remained flexible despite Ghani’s intransigence, even engaging the Afghan government through videoconferencing. Given the turmoil at home and in Afghanistan, the U.S. withdrawal could be accelerated, as long as the Taliban comply with their commitments to the United States. The Trump administration’s focus in Afghanistan remains its counterterrorism goals and a dignified withdrawal. The onus will be on the Afghans to resolve their own disputes. America’s bureaucratic capital to invest in political interventions in Afghanistan is shrinking.

Ghani has refused to see the writing on the wall. The Pompeo visit was extraordinary given the timing. America, like much of the world, is in the throes of a national crisis that could see tens or even hundreds of thousands of deaths due to the Coronavirus. Economic activity in large swaths of the United States has nearly come to a halt. The U.S. gross domestic product could shrink by almost 30 percent. And the unemployment rate may rise to 20 percent. A whopping $2 trillion stimulus program is being put into effect to save the economy. But even that may not be enough. Amid the most crucial period in what is no less than a generational challenge, Pompeo dedicated roughly two days (including travel) to resolve yet another power dispute in Afghanistan. That is precious time from a superpower in an existential crisis. And what did Ghani do? He effectively slapped Pompeo’s hand away.

Ghani and his millennial minions probably believe that America is bluffing. They see their country as indispensable to American security. That thinking, fed by the indulgence of the Beltway, is outdated. The reality is that Afghanistan is a landlocked country thousands of miles away from America and of marginal economic and strategic importance to it. Once the Trump administration signed a deal with the Taliban, it began to look at Afghan war through the rearview mirror. And with the monumental crisis created by the Coronavirus pandemic, the American foot will remain steady on the accelerator. The troops are coming home.

It is possible that the punitive action announced by Pompeo on Monday could knock some sense into Ghani’s head. Ghani is likely to make concessions on the Taliban prisoner deal, which is a priority for Washington. But the dispute with Abdullah will probably continue. Above all, what Ghani wants is absolute power. And Abdullah knows that. He knows Ghani too well. He knows that Ghani’s commitments mean nothing and that he will be betrayed again once American attention wanes.

The 2014 elections were also rigged in Ghani’s favor. And for the next five years, Ghani failed to abide by the terms of the unity government agreement with Abdullah brokered by then-Secretary of State John Kerry. Instead, he sidelined Abdullah and played a balancing game, alternating between punishing and courting rivals like Atta Noor and Abdul Rashid Dostum.

A wiser Abdullah is now asking for nothing short of a change in the constitution that would codify a formal role for him. And that is too much for the power-hungry Ghani, who, as Pompeo’s statement on Monday suggests, may have been ready to use military force to evict Abdullah from their shared presidential compound.

A civil war in Afghanistan is by no means certain. But it is more probable once again thanks to the destructive actions of Ashraf Ghani, enabled by strategic errors by America over the past year. Washington should have pressed for the formation of an interim government last year and the indefinite postponement of the elections. It should have cut assistance to Afghanistan before the rigged election results were announced. And it erred by attending Ghani’s inauguration, conferring irreversible legitimacy on his stolen victory.

The State Department appears to see Ghani’s second term as temporary—with Ghani eventually ceding power to an interim government once the intra-Afghan process takes off. But Ghani absolutely sees it as a five-year mandate and will preserve it by any means, including his strategy of balancing his friends and foes alike, playing them off of one another and creating hurdles along every step of the peace process. Fed up with Ghani, other Afghan factions led by Abdullah could seek their own deal with the Taliban, backed by many regional states. This may be the only solution to preventing all-out civil war. The probability of Afghanistan seeing a lasting peace with Ghani at the helm is extremely low.

Sadly, the tragedy of Afghanistan is likely to continue for the foreseeable future. And its problems are bound to be compounded by the Coronavirus pandemic. Already, the virus is spreading in regions of Afghanistan like Herat where Ghani’s rivals dominate. And though this is due to pilgrim and migrant flows, the pain will probably be most felt among the Hazara and Tajik Shias, who may end up blaming Ghani for the death toll.

If an Abdullah-led multiethnic group of Afghans begins its own dialogue with the Taliban, America should not stand in their way. It should offer moral support. But, beyond this, America has fulfilled its moral commitment to Afghanistan. We are not cutting and running. We have been there for more than eighteen years.

American strength comes not from occupying remote outposts along the Hindu Kush, but from the prosperity and ingenuity of our own people. The billions spent on Afghanistan would be better allocated toward bolstering the resilience of our public health system to prevent a crisis like today’s from emerging and addressing the medical and student loan debt crises, which have emerged as barriers to upward mobility.

Ghani and other Afghan power brokers need to know that the shot clock is ticking. The American public’s appetite for endless cycles of overseas military deployments may quickly vanish. The economic and human shock of the Coronavirus could radically impact U.S. domestic politics. The Great Recession helped give birth to the Tea Party and Occupy Wall Street movements, whose lasting effects have been the shift of the Democratic and Republican parties away from the center. Concerns over economic security will continue to trump national security. And when it comes to foreign policy, the rivalry with China will take center stage. Pretty soon, Afghanistan may not be on anyone’s radar.

China and other powers may seek to fill the vacuum in Afghanistan left by the United States. It is in the American interest that the burden be transferred to them, as long as they can guarantee some stability and prevent international terror. But no foreign military is likely to repeat the folly of deploying military forces to Afghanistan.

The Afghans should know that they may be left to fend for themselves. And should their country face total collapse once again, they have no one to blame but themselves. Over the past four decades, they have been in a long war with one another, relying on outside forces to seek advantage over their fellow countrymen. Now is the time for Afghans to rise to the challenge. A pandemic is on its way. And so too is a civil war.