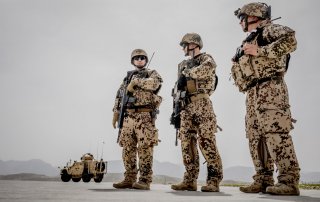 As fighting escalates in Afghanistan between government forces and the Taliban insurgent group, U.S. and international troops are steadily leaving the country, in accordance with President Joe Biden’s commitment to a full withdrawal by September 11, 2021. On Tuesday, the last German troops left the country, following their twenty-year involvement alongside U.S. forces.

Biden justified the withdrawal on the basis that Afghanistan could no longer serve as a safe haven for terror groups, as it had in the late 1990s under the first period of Taliban rule. However, to prevent the nation from falling into chaos, Biden reiterated total American support for the Afghan government. Earlier in the week, the president met with Afghan president Ashraf Ghani and Chairman of the High Council for Reconciliation Abdullah Abdullah in the Oval Office, where he recommitted the United States to assisting their government during the war.

For their part, the Afghan leaders’ remarks were optimistic, but tinged with frank acknowledgement of the difficulties ahead. Ghani noted that “the Afghan nation is in [an] 1861 moment, like President [Abraham] Lincoln, rallying to the defense of the republic”—although 1861 marked the beginning of an intense and destructive four-year war, rather than the end.

It is nearly certain that the violence will continue to escalate. The Taliban controls dozens of Afghan districts; UN Special Envoy on Afghanistan Deborah Lyons noted that the group fully controlled 50 of Afghanistan’s 370 districts, while other sources placed the number as high as 80 (and the Taliban have insisted that they control more than 100).

Army Gen. Scott Miller suggested that Afghanistan would face “very hard times” once the United States completed its withdrawal: “Civil war is certainly a path that could be visualized if this continues on the trajectory it’s on right now.” The general suggested that airstrikes might be used to curtail Taliban influence, although he emphasized that it would be preferable not to have violence in the first place.

Miller sharply criticized the Taliban for failing to uphold its commitment to reduce violence and sever its ties with Al Qaeda, two concessions that the group agreed to in the February 2020 agreement that paved the way for U.S. withdrawal.

Instead, the Taliban launched an offensive, making significant gains in captured territory; one Taliban commander was even quoted as saying that the group had intentionally slowed its advance to avoid antagonizing the United States too quickly.

The Biden administration has steadily resisted plans to undo the withdrawal timetable, but it recently announced that it would leave behind 650 U.S. troops after the official withdrawal date, to provide security at the U.S. Embassy in Kabul. This is a sure sign that further violence is expected in Afghanistan’s capital.