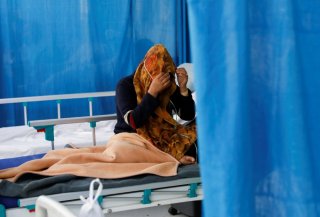 Following a visit to Kabul by World Health Organization (WHO) Director-General Tedros Adhanom Ghebreyesus, the organization has warned that Afghanistan’s health system is in danger of imminent collapse.

“The country faces an imminent humanitarian catastrophe,” the WHO said in a statement, highlighting the risk of thousands of facilities at risk of closure because of a lack of funds for supplies or medical staff. “Many of these facilities,” the statement continued, “have now reduced operations or shut down, forcing health providers to make hard decisions on who to save and who to let die.”

The main problem that the WHO highlighted was a lack of funds, which declined precipitously after the capture of Kabul, Afghanistan’s capital, by the Taliban on August 15. The Taliban takeover has led to a decrease in funding from international organizations, which justifiably fear that some portion of the funds could be siphoned off to aid the Taliban. However, the decrease in funds for health organizations has had a profoundly negative impact on the country’s health system, leading some groups to backtrack; on Wednesday, UN aid coordinator Martin Griffiths released $45 million from the UN emergency fund to prop up the country’s clinics and hospitals.

“Allowing Afghanistan’s healthcare delivery system to fall apart would be disastrous,” Griffiths warned, pointing out that it would make it far more difficult for people in rural areas to access primary health care.

Some aid groups, including the Red Cross, have committed to maintaining a presence in the country, and the U.S. Department of State has encouraged this.

In its first days as Afghanistan’s rulers since 2001, the Taliban administration has had a number of different challenges. Afghanistan’s humanitarian crisis, including both the collapse of its health system and difficulties in importing food, have represented a major test of its early legitimacy.

Additionally, the group has faced a renewed challenge from the Islamic State’s “Khorasan Province” affiliate, known in the West as ISIS-K. The group was responsible for a suicide bombing of Kabul’s airport during the U.S. military evacuation. It has also since launched a series of bombs targeting Taliban soldiers in Jalalabad, a city in eastern Afghanistan.

The Taliban has appealed to the United Nations for a seat, appointing Suhail Shaheen, a prominent spokesman, as Afghanistan’s prospective UN ambassador. The UN and other governments have been reluctant to recognize Afghanistan, in part due to the Taliban’s refusal to establish a representative government including women and ethnic and religious minorities.