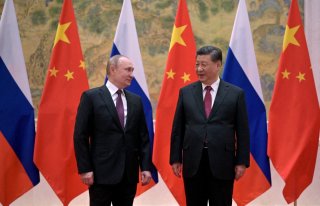 “If we had been attacked on September 11, 2001, from Yemen instead of Afghanistan, would we have ever gone to war in Afghanistan—even though the Taliban controlled Afghanistan in 2001?”

Instead, for twenty years, the United States sacrificed trillions of dollars and thousands of lives pursuing broad counterterrorism and state-building missions that neighboring powers with a greater stake in Afghanistan’s security regime should have been doing themselves. Today, the United States should keep passing the buck.

Since the U.S. withdrawal, various regional powers have developed a cautious approach to Afghanistan to insulate themselves from security threats and avoid exacerbating the deteriorating humanitarian situation. Foreign direct investment in Afghanistan is negligible and, other than outside actors looking to exploit its rare earth metal composites, there is unlikely to be substantial interest in cultivating long-term projects. For all the talk of Chinese diplomats swooping into Kabul to add Afghanistan to its client network, Beijing has wisely refrained from what would be a misguided commercial adventure in a landlocked, undeveloped, and dangerous frontier state. Rather, Chinese engagement with the Taliban is, in the succinct determination of scholar Jennifer Brick Murtazashvili, “not a luxury, but a necessity.”

More specifically, Murtazashvili noted in her May 2022 testimony to the U.S.-China Economic and Security Review Commission that Chinese officials fear a “potential spillover of Islamic extremism from Afghanistan into Western China and the Xinjiang Autonomous Region,” where over one million Uyghur Turkic Muslims are incarcerated in internment camps. Chinese diplomatic outreach to the Taliban, therefore, is largely based on Beijing’s interest in limiting the activities and influence of the separatist East Turkestan Islamic Movement along its western border with Afghanistan.

Russia harbors similar concerns about instability in Afghanistan. After the September 11 terrorist attacks, President Vladimir Putin was the first foreign leader to call President George W. Bush and offer support for U.S. counter-terrorism goals. No doubt many members of the Russian foreign policy establishment vividly remember the high-profile Chechen terrorist attacks of the early 2000s that killed hundreds of Russian civilians. Given its diverse multiethnic, multireligious, and multinational composition, separatist political movements pose a risk to the stability of the Russian state. Accordingly, calls for regional autonomy, as independence-seeking Chechens learned three decades ago, will be answered with overwhelming Russian military force. Likewise, Russia’s bases in Tajikistan and Kyrgyzstan are primarily aimed at fortifying its southern periphery and demonstrating its primacy as a security guarantor for members of the Collective Security Treaty Organization. In Moscow’s view, cross-border terrorist activities emanating from Afghanistan could negatively affect regional stability and foment political disintegration in young post-Soviet states.

China and Russia both hold inflated threat perceptions about the risks of cross-border terrorist attacks fomenting separatism on their territory or in their spheres of influence. However, given the nature of their respective systems of governance, leaders in Beijing and Moscow will continue to view political developments in Afghanistan with an acute sense of anxiety and insecurity. China and Russia will likely find that their interests in Afghanistan converge enough to merit some degree of local security cooperation. Afghanistan is a second-tier concern, but it has become a more pressing one since U.S. forces withdrew from the country.

Neighboring Iran is hardly enthusiastic over the Taliban’s military victory in Afghanistan. Aside from long-running religious differences and concerns over drug trafficking (which will be less of an issue given the Taliban’s recent ban on poppy production), an increase in refugees and border disputes have aggravated relations since last summer. There are, however, incentives for Iran to find a modus vivendi with the Taliban, and Tehran’s diplomatic outreach to the group precedes the fall of Kabul. First, Iran is Afghanistan’s largest trading partner. Even amidst the turmoil last August, trade continued largely uninterrupted. Second, both Iran and the Taliban view the Islamic State-Khorasan Province (ISIS-K) terrorist group as a threat. Iran’s cooperation with the Syrian and Iraqi governments to combat ISIS was driven by the fear that the growth of an extremist Sunni statelet pursuing regional preeminence could topple friendly neighboring governments in Damascus and Baghdad. The prospect of facing the same outcome in Afghanistan means that Tehran will support Taliban efforts to keep the group’s activities in check. Finally, Iran wants the Taliban to control cross-border refugee flows to help minimize humanitarian costs and domestic political-social instability. It might have a willing partner in the Taliban, who are seeking to avoid any further “brain drain” and social capital losses that would hinder Afghanistan’s political and economic reconstruction.

Pakistan will continue to maintain a complex and difficult relationship with the Taliban. Whether Islamabad can induce the Taliban to pressure or limit the activities of the (unrelated) Tehreek-e-Pakistan Taliban (TTP) remains to be seen. Yet, more than any other neighbor, Pakistan has the greatest stake in Afghanistan’s political development. The depth of Islamabad’s cooperation with the Taliban will be contingent on internal security developments and how tolerant its leaders will be of other separatist and terrorist organizations operating on Afghan soil that target Pakistani interests.

Since the withdrawal last year, U.S. officials have begun to emphasize that Afghanistan is not just Washington’s problem anymore. This was always the case, and the unwillingness of the U.S. foreign policy establishment to act according to this basic geopolitical reality was a gross policy failure that culminated in the embarrassing termination of a bankrupt war. Going forward, Afghanistan should be absent from the list of issues most relevant to U.S. foreign policy. The country’s fate will invariably be of greater interest to its Chinese, Russian, Iranian, and Pakistani neighbors instead.