Afghanistan on Notice: Why America Needs to Establish a Troop Withdrawal Deadline 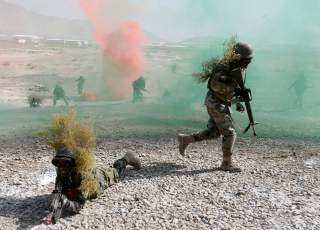 Unfortunately, no one seems to know how to do it.

Many fear that a precipitous withdrawal would create a power vacuum that the Taliban would soon fill. Afghan spaces would soon be ungoverned; Al Qaeda would return; our allies would be massacred. After eighteen years of assistance, the Afghan government does not appear capable of standing on its own, and U.S. forces seem stuck.

There is a way out of Afghanistan, however, and it can be accomplished before Trump leaves the White House. But it would need to be clearly explained to the American people since it would create a good deal of backlash and misunderstanding.

If the United States wants to withdraw from Afghanistan, then it is time to announce a firm deadline for withdrawal—say, a year out—and stick to it. Only a clear withdrawal date (or “date certain,” to use the puzzling Yoda-like term of art) can lead to a successful outcome of this forever war.

Critics would howl and decry the notion of telegraphing our plans to the Taliban. But that would merely show that they don’t understand the strategic logic of withdrawal or the nature of guerrilla warfare. The most important actor in Afghanistan, what strategists sometimes refer to as the “center of gravity,” is not the Taliban but the President Ashraf Ghani government. The central U.S. goal is not to defeat the insurgents but to establish a viable national government able to stand on its own.

It is not America’s enemies who are the main obstacle to success, in other words, but America’s allies. Washington’s strategy needs to focus on changing the behavior in Kabul, where its true problems reside.

Deadlines concentrate the mind. As anyone who has tried to complete any kind of project knows, without a little extra pressure, nothing gets done. As it stands, Ghani has little incentive to try to improve the performance of his government. As long as he can count on the support of thousands of NATO troops, there is no reason to cooperate with the regional warlords or try to cut deals with local Pashtun leaders who might be seduced away from the Taliban. He has to make no tough decisions as long as his basic security is assured by the United States.

Washington’s goal should not be to force the various Taliban groups to negotiate. Instead, it should encourage the rather ineffective, corrupt, venal central government to make the kind of adjustments that would allow it to survive without the presence of NATO. Setting a deadline may be the only way to accomplish that feat.

The Afghan security forces have ten times more troops than the insurgency. Polling consistently indicates that the people have no love for the Taliban, and do not wish to see it return to power. In other words, the insurgents can kill many people and make life miserable in Afghanistan, but it cannot topple a competent government. Kabul can essentially bring itself down, however, through mismanagement and incompetence.

It is worth remembering what happened when the Soviet Union attempted to build a nation in Afghanistan. Once Soviet leader Mikhail Gorbachev announced in April 1988 that Soviet troops would leave by February, their puppet in Afghanistan, known by the single name Najibullah, was forced to get serious about governing without friendly foreign troops.

The deadline worked. Although Najibullah led a government that was even less popular than the current one, and even though he faced much stronger opposition, once he knew he would soon have to stand on his own he got serious about governing. The Soviets withdrew according to schedule, by which time Najibullah had consolidated his position enough to hold on to power far longer than the CIA thought he would. As it turned out, that government outlasted its sponsor’s and collapsed only after the aid spigot from Moscow ran dry.

For nineteen years, the United States has sent the wrong message to Kabul. One president after another has assured America’s Afghan allies that U.S. troops would stay until stability came, which has given the Afghans no incentive to bring about that stability. If the United States wants its local allies to take control of their own affairs, then it has to encourage them to do so. Setting a deadline for withdrawal is certainly the correct strategic choice and would achieve the desired end result.

Christopher J. Fettweis is a professor of political science at Tulane University. He most recent book is Psychology of a Superpower: Security and Dominance in U.S. Foreign Policy.