After Losing Istanbul, Erdogan's Grip on Turkey Will Never Be the Same 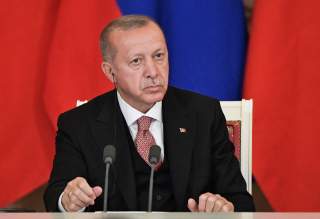 It was some years ago that Turkish president Recep Tayyip Erdogan coined the saying “Those who win Istanbul, win Turkey.” It was based among other things on his own political trajectory. Erdogan rose to national prominence with his election in the mid-1990s as the candidate of the then Islamist party, Refaah, as mayor of Turkey’s largest city, Istanbul. His statement must have come to haunt him on June 23 when Ekrem Imamoglu, the opposition CHP nominee, defeated his candidate for the mayor of Istanbul, Binali Yildirim, decisively. What has added insult to Erdogan’s injury is the fact that Imamoglu garnered over 54 percent of the votes thus increasing his vote share by 6 percent compared to the March 31 result when he had barely managed to defeat former Prime Minister Yildirim with a very thin margin of fifteen thousand votes. The High Election Council under pressure from Erdogan and his party, the AKP, annulled the March 31 election results on flimsy technical grounds, a blatant tactic to deny the opposition control of Istanbul and its vast resources. It is clear that many of the ruling party supporters who were disgusted with these tactics switched their votes to Imamoglu this time, thus punishing Erdogan and his party for their subterfuge.

If one accepts the fact that the Istanbul verdict is a bellwether for what could happen in the rest of the country when national elections are held then it is good news for the opposition. The Istanbul verdict is very important because nearly one-fifth of the Turkish population lives in Istanbul and the city produces over thirty percent of Turkey’s GDP. Moreover, Istanbul is not alone in sending the signal that large segments of the population are disenchanted with Erdogan and the AKP. The second and third largest cities in the country, Ankara and Izmir, also elected opposition candidates as mayors in the March 31 local elections as did several other large urban concentrations. It is the Anatolian heartland with its conservative and religious orientation that has so far stood by the AKP.

But even there Erdogan’s popularity seems to be waning. One of the main reasons for this is the very visible downturn in the economy and the precipitate fall of the Turkish currency during the past year. It now stands at almost six liras to a U.S. dollar, almost half its value a year ago. Some of the reasons for the collapse of the lira is related to Erdogan’s continuing feud with the United States that has introduced a number of uncertainties into the Turkish economy, including the threat of American sanctions. More importantly, the AKP government has grossly mismanaged the economy among other things by spending unwisely on giant and prestigious projects like a new airport in Istanbul, which is slated to be the world’s largest, and construction of bridges and gigantic mosques that have depleted resources and driven the government into debt of huge proportions. Now that the building boom has turned into bust and inflation is rising, it has hit the average voter hard. The economic malaise has also begun to alienate the religiously observant bourgeoisie in the towns and cities of interior Anatolia who had formed the financial backbone of the AKP and a major engine of growth during Erdogan’s long tenure first as prime minister and then as president.

Simultaneously, Erdogan has alienated a section of his Islamist base by his running feud with Fethullah Gulen, in self-exile in the United States, and the latter’s Hizmet organization that has been declared a terrorist group following the abortive military coup of July 2016. Thousands of Gulen supporters, the most educated and skilled among the religiously observant population, are in jail and thousands of other Turks have been sacked from their government and public sector jobs on suspicion of being Gulenists. Several universities and schools run by the Gulen movement have been closed and newspapers connected with Hizmet have been shuttered or taken over by the government as part of the crackdown on the movement. Erdogan has also tried to muzzle the independent media unrelated to the Gulen movement in an attempt to control the flow of information to the Turkish public and deny the opposition a level playing field.

Two additional factors have eroded Erdogan’s popularity. The first is his recently cultivated hyper-nationalism, especially his antagonism toward the Kurds, in order to placate his ultra-nationalist allies in the MHP, which provides the AKP government crucial support in parliament. This seems to have boomeranged, driving many moderates to side with the opposition. This is particularly true of the Kurdish population—and Istanbul with over three million Kurds is the largest Kurdish city in the world—that has been alienated by Erdogan’s stridently anti-Kurdish rhetoric and the resurgence of conflict between the state and the Kurdistan Workers’ Party (PKK) after a lull that a few years ago portended the end to the Kurdish insurgency. Erdogan’s military campaign against the Syrian Kurdish enclave has added to Kurdish disenchantment with him. It appears that the Kurdish population of Istanbul became a reservoir of support for Imamoglu in the mayoral elections.

Secondly, Ankara’s ill-conceived involvement in the Syrian Civil War has cost Turkey hugely as a result of massive inflow of refugees and an expanding defense budget that has added to the country’s economic woes. At the same time, the Turkish government has been engaged in a running dispute with its principal NATO ally, the United States, over trade issues, differences regarding the approach to the Syrian Kurds, and the Turkish decision to buy the S-400 anti-missile system from Russia. The United States haas supported the Kurdish militia in Syria, the YPG, as crucial allies against ISIS while Turkey considers the YPG as an extension of the secessionist PKK that has been battling the Turkish state for decades. This dispute between the two allies has introduced a great deal of bitterness in their relationship.

Furthermore, the United States has threatened to impose economic sanctions on Turkey if Ankara acquires the S-400 system from Russia. Turkey has been defiant on this issue with the first S-400 deliveries scheduled for this month. Experts believe that these sanctions will kick in automatically under the Countering America's Adversaries Through Sanctions Act (CAATSA), a 2017 congressional bill penalizing any country that has purchased military equipment from an American foe, and Russia falls in that category.

While all these factors point to a gradual but certain erosion of Erdogan’s hold on power, it is too early to say that it will lead to his unseating in the next national elections. Parliamentary and presidential elections in Turkey are more than four years away and much can happen in the intervening period to reverse the Istanbul verdict. This is especially true given the fact that Erdogan has concentrated power in his hands and misused it to muzzle the media and harass opponents of all hues. He also has chameleon-like qualities and has mastered the art of political manipulation. He is likely to put these skills to good use in the next few years.

Nonetheless, the Istanbul elections do indicate that Erdogan’s semi-authoritarian rule has not been successful in quashing the democratic spirit that still drives most of Turkey’s voters. It is also likely to encourage figures like former President Abdullah Gul, former Prime Minister Ahmet Davutoglu, and former Economy Minister Ali Babacan, stalwarts of the AKP whom were sidelined by Erdogan in his quest for aggrandizing power, to come out in open opposition to the president. They could either form a new conservative party or throw their lot in with one of the current opposition parties, the secularist CHP or the center-right Iyi Party, in an effort to unseat Erdogan.

Finally, the magnetism and determination demonstrated by Imamoglu during the Istanbul election campaign, in which he completely overshadowed the AKP candidate, now also provides the opposition with a charismatic figure around whom it can possibly coalesce. Erdogan’s days may not be numbered already but his grip on power will never be the same again.

Mohammed Ayoob is University Distinguished Professor Emeritus of International Relations, Michigan State University, and a senior fellow for the Center for Global Policy. His books include The Many Faces of Political Islam and, most recently, Will the Middle East Implode?. He is the editor of Assessing the War on Terror.