For America to Be Secure, Assad Must Go 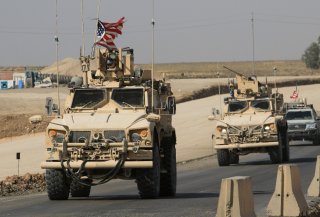 The incident, which garnered relatively little attention in the media, shows why an increasingly prevalent strain of thought in the U.S. foreign policy community is so misguided. Some in Washington are fed up with America's ongoing involvement in the now eleven-year-old Syrian Civil War. They feel that Syrian dictator Bashar al-Assad has mostly defeated the various rebel factions, so it makes sense to patch things up with Assad, remove sanctions on his regime, and wash our hands of the entire ordeal.

This desire to walk away is understandable—but dangerous. Assad is the linchpin for most of America's geopolitical enemies, including Iran, Russia, Hezbollah, and others. Cozying up to him and enabling his regime to reassert its reign of terror over the whole of Syria would empower and further unite America's enemies.

The Syrian Civil War erupted over a decade ago when pro-democratic forces rose up against the oppressive Assad regime. Since then, Assad has engaged in brutal and unrelenting attacks against his own people. He has taken over half a million lives and displaced about half the country's population. Assad has used chemical weapons, imprisoned and tortured innocent people on a massive scale, and deliberately targeted civilians.

In short, Assad is a dictator, a war criminal, and a murderer. He also happens to pose a very real threat to the most basic U.S. security interests.

To begin with, the relative impunity with which Assad has carried out his war crimes has sent a dangerous signal to the world. Indeed, had the United States and its allies acted more forcefully to check Assad's aggression early in the conflict, it might well have sent a message strong enough to deter Russian president Vladimir Putin's invasion of Ukraine.

It's hardly a coincidence that Putin has been one of Assad's closest allies in the Syrian conflict. Beginning in 2015, the Russian military engaged in brutal airstrike campaigns in Syria on behalf of Assad, targeting schools, hospitals, and markets. That intervention marked a turning point in the war, and the opposition forces have never fully recovered.

Russia isn't the only American adversary with strong ties to Assad. Iran has lent military support to the dictator since the beginning of the civil war, and it has helped recruit militias from Iraq, Lebanon, Pakistan, and Afghanistan to fight for him.

The relationship goes both ways. Assad has permitted Iran to use Syria as a safe harbor from which to attack other countries in the Middle East, including Israel and Jordan.

In May, Assad paid a visit to Tehran—his second since the war began—to fortify his relationship with Supreme Leader Ayatollah Ali Khamenei. At that meeting, Khamenei lauded Assad, proclaiming that "the respect and prestige of Syria is greater than before, and everyone sees this country as a power."

The Assad regime also has a close, mutually beneficial partnership with Hezbollah, the Lebanese terrorist organization. Hezbollah has sent thousands of fighters to assist Assad, and the dictator has returned the favor by funneling Iranian weapons to the group.

In short, the Assad regime has helped bring together some of America's most dangerous geopolitical foes, undermining American interests in the Middle East and around the world.

Assad's regime has played this role before. In 2003, after U.S. forces overthrew Saddam Hussein's similarly murderous regime, Assad's government recruited and sent jihadist fighters into Iraq to attack Americans and pro-American Iraqis—a deed for which Assad has American blood on his hands. He has also fueled the deadly drug trade by overseeing Syria's emergence as one of the world's foremost suppliers of captagon, an addictive amphetamine.

Unfortunately, U.S. officials have been reluctant to face this fact. It remains the official goal of the Biden administration to reach a negotiated political settlement in Syria. And to the extent that American troops remain in the country, their chief purpose, we are still told, is to keep ISIS in check.

These highly circumscribed objectives are an insufficient response to the challenge Assad poses, and U.S. policy is growing less defensible by the day. A far better approach would involve using consistent diplomatic pressure to achieve the "political transition" envisioned by United Nations Resolution 2254 in 2015. The Assad regime is an affront to Western values, a threat to U.S. global influence, and an imminent danger to American national security. America's leaders need to acknowledge these facts and commit to helping the Syrian people transition to a democracy and end Assad's dictatorial reign.

Dr. Tarek Kteleh is a practicing medical doctor and president of Rheumatology of Central Indiana. He is the author of The Six Pillars of Advocacy: Embrace Your Cause and Transform Lives.