America Must Not Lose Saudi Arabia to China 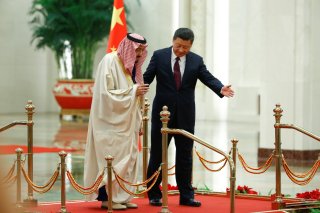 Recent reports had President Xi Jinping of China scheduled to visit Riyadh in August. Although the trip never happened, Xi likely will visit the desert kingdom in the near future. The anticipated meeting between the regional power of Saudi Arabia and the ascending global power of China offers the United States an opportunity to reflect on this budding alliance between the two countries. It should remind Americans of the importance of a regional security strategy that courts the Saudis. It should also remind Americans that if they lose Saudi Arabia to Chinese ambitions, human rights will never materialize in the Middle East. For that to happen, the United States needs to double down on its efforts to placate Saudi anxieties about a region without a strong American presence.

The Saudis have plenty of reasons to be attracted to deeper ties with Beijing. The Chinese will not bother Saudi royals about their gross human rights abuses. China is already the kingdom’s largest trade partner, with a relationship generating tens of billions of dollars of wealth. What is more, China is rising across the globe economically and militarily. But the most important reason for Saudi Arabia’s turn toward China is its perception of a United States that is unreliable and uncommitted to the region.

It’s easy to understand Saudi fears. The United States invaded Iraq, allowing Iran the vacuum it needed to spread its hideous ideology. It then pulled out, both from Iraq and Afghanistan, amidst predictable chaos. The United States, especially under President Barack Obama, continuously spoke of the need to “pivot” to Asia, implicitly meaning it needed to pull from the Middle East. In the process, the United States courted Iran against Saudi and other allies’ concerns about a revolutionary country committed to their downfall. While there was some warming under President Donald Trump, President Joe Biden publicly promised to make Riyadh a “pariah.” Saudi Arabia’s seeking friendship with China makes perfect sense under such circumstances.

Saudi Arabia will not be able, at least in the short term, to do away with American influence. The countries have been close allies for eighty years. Saudi Arabia relies heavily on American arms sales, with the United States supplying 82 percent of Saudi arms imports. Reliant almost exclusively on American arms, the Saudi military infrastructure and weapons do not translate easily to their Chinese counterparts. What is more, tens of thousands of Saudis have graduated from American universities and continue to flock to American campuses. Even the futuristic city of Neom pulls from the urban planning models of Houston.

But these deep ties should not lead us to believe that the Saudis are permanent and happy allies of the United States. It is reported that China has already helped the Saudis develop nuclear infrastructure. There is no reason to doubt that the Saudis are perfectly capable of diversifying their military infrastructure in the next decade, just as the Chinese are perfectly capable of supplying prestigious universities and urban planning experts. Such a revolutionary change in allies is particularly plausible given the unorthodox leadership of Crown Prince Mohammed bin Salman (MBS) who has demonstrated a penchant for dramatic shifts in Saudi politics.

China cannot replace the United States for Saudi Arabia, not yet. But a deepening alliance between Riyadh and Beijing weakens the leveraging power of American diplomats to shape the Middle East. Saudi Arabia is the key player in a regional security coalition of states capable of restoring peace and resisting the Iranian revolution. In important ways, the United States and China share critical interests in Saudi Arabia such as promoting regional stability and the free flow of resources through the Persian Gulf and the Red Sea. But China cares little for other American endeavors which also require the support and acquiescence of Saudi Arabia.

Chief among these other interests is the promotion of religious pluralism through the Abraham Accords. The Abraham Accords are more than a political and strategic alliance between Arabs and Israel—here they only formalized an already secret partnership. More importantly, the accords are an effort to promote the virtue of tolerance in a region prone to exclusionary fanaticism. These partnerships allow citizens in Israel and the participating Arab countries to travel to areas once prohibited, to build cultural and economic ties, to share a drink and converse. If not currently reflective of the broader mores of Arabs, these economic and political partnerships could help soften widespread anti-Semitism in the Arab world. We will not see this sort of cultural shift for some time. But it is reassuring that Israeli foreign minister Yair Lapid and American secretary of state Antony Blinken believe that normalization between Riyadh and Jerusalem is possible, even critical.

Saudi Arabia’s participation in the Abraham Accords is essential to realizing such a regional shift in cultural mores. Should MBS, the future custodian of the Holy Mosques of Mecca and Medina, go further and normalize relations with Israel, he may help infuse the Middle East with a religious tolerance not seen in a century. After decades of civil war between Sunni and Shia, Muslims and Jews, and genocide of Christians, this prospect for religious pluralism in the land(s) of Abraham is too good to pass up. China is content to see an informal partnership between Israel and Saudi Arabia—it has no express interest in pushing the Abraham Accords to accomplish what it was intended to do.

Pragmatism dictates that the United States not let a regional leader fall under the sway of another world power. The United States’ aspirational values of freedom and religious tolerance require that the once ambitious superpower not lose its privileged position in Riyadh to effect real social change. The United States should continue to vigorously court Saudi Arabia. Already the Biden administration has signaled that it understands this vitally important strategic objective. Biden visited the kingdom earlier this summer, as he should have. He should continue to make clear to the Saudi royals his commitment to the region and to Riyadh.

Placating Saudi fears means more public appraisal from American officials of Saudi efforts to modernize its society. American policymakers should celebrate MBS’s efforts, for example, to sideline Wahhabists and the country’s “vice police.” These wandering bands of fanatics regularly harassed women who did not adhere to the strictest demands of Sharia. Under MBS, Saudi Arabia has opened more to tourism, screens Hollywood movies for its population, and hosts concert series starring Western musicians. Such changes are a far cry from embracing the total freedoms of the individual we expect in a modern society. Yet, in Saudi Arabia, such changes are remarkable and should be publicly encouraged by American diplomats and political leaders. In hand with this congratulatory rhetoric, officials should be less intent on condemning human rights abuses in the kingdom. The United States is much more likely to effect change in this direction through soft diplomatic pressure in the long run rather than righteous exhortations now.

Finally, if the United States sees fit to continue its efforts at a nuclear deal with Iran, it should also make clear its commitment to Saudi Arabia by selling our old friend offensive weapons. Doing so would help persuade Saudis that the United States still views the kingdom as a trusted partner, at least one that can be trusted to wield weapons.

In short, letting the eight-decade-long friendship between Saudi Arabia and the United States fall to Chinese encroachments would be a strategic catastrophe and a moral blemish on the American legacy.

Max J. Prowant is a Philos Project Research Fellow at In Defense of Christians. He is also a Ph.D. Candidate in Government at the University of Texas at Austin.