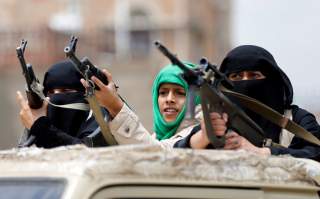 America’s controversial relationship with Saudi Arabia was thrust into the spotlight once again in the wake of Monday night’s CNN report that Saudi Arabia and the United Arab Emirates, “have used the US-manufactured weapons as a form of currency to buy the loyalties of militias or tribes,” in Yemen, many of which are affiliated with Al Qaeda. CNN found that U.S.-made weapons have become widely available through the growing black-market arms trade and that American arms have even fallen into the hands of Iranian-supported Houthi rebels. If CNN’s report is accurate, then Saudi Arabia and the UAE have violated the terms of their arms agreements with the United States, which prohibits the transfer of U.S. weapons to third-parties within Yemen.

This report naturally sparked outrage on Capitol Hill, where many members have already soured on the U.S.-Saudi relationship in the wake of Saudi involvement in the murder of journalist Jamal Khashoggi. On Wednesday, House Democrats approved H.J.Res.37, a bill that invokes the War Powers Resolution to end American participation in Yemen’s civil war. The House is expected to approve this resolution, while the Senate approved a similar proposal last December and could very well do so again.

With Congress finally poised to consider the merits of America’s military involvement in Yemen, the decision of its ostensible allies to transfer American-made weapons to its enemies should be viewed as the last straw. The Saudi-led and U.S.-backed military campaign in support of beleaguered Yemeni president Abdrabbuh Mansur Hadi has failed to materially improve the conditions on the ground and has instead contributed to what the UN labeled the world’s most dire humanitarian crisis. America should end its support for the coalition and condition further arms sales to Saudi Arabia and the UAE on both countries ceasing their offensive military operations in Yemen and aggressively pursuing a negotiated peace settlement between the warring parties.

Saudi Arabia entered the Yemen conflict in March of 2015 driven by its desire to roll-back the growing influence of the Houthis (a Zaydi Shia rebel faction supported by the Iranians) and prevent Tehran from establishing a foothold in Yemen. The United States, attempting to solidify its relationship with the Saudis in preparation for its then-pending nuclear deal with Iran, began offering intelligence sharing, targeting assistance for munitions, and, until recently, midair refueling for Saudi warplanes. America has also conducted its own air strikes and special forces operations against terrorist groups operating inside Yemen. Saudi Arabia initially labeled its intervention efforts as “Operation Decisive Storm,” betraying confidence in its ability to quickly dispatch of anti-government forces.

Unfortunately, the Saudi coalition’s entry into the conflict proved anything but decisive. Between January 2016 and November 2018, the Armed Conflict Location & Event Data (ACLED) Project recorded 60,223 conflict-related fatalities, a number over six times larger than the United Nations’ original estimate. The violence also sparked a nation-wide famine. Save the Children estimates that eighty-five thousand children have died of starvation, while the UN warns of a nearly unfathomable fourteen million Yemenis who exist on the brink of starvation.

The Saudi coalition, while far from the only cause of violence, has been a leading driver of the mounting civilian casualties. The aforementioned ACLED study found that Saudi Arabia and its allies were responsible for 4,614 civilian deaths since 2016 (over four times as many casualties as the 1,027 attributed to the Houthis and their allies), while the Yemen Data Project notes that a substantial number of Saudi air strikes are directed at nonmilitary targets. The Saudi military is responsible for egregious errors such as bombing a funeral that it mistook for a rebel gathering, and its targeting of agricultural infrastructure and lengthy blockade of Yemeni ports greatly contributed to the creeping famine.

Ironically, Saudi Arabia’s involvement in the conflict seems to be have strengthened the positions of the forces it sought to oppose. At an event hosted by the Center for the National Interest last December, Daniel Byman of the Brookings Institute argued that while Iran offered limited support to the Houthis during the early stages of the conflict, the ties between the two Shia forces have deepened as a result of Saudi intervention, strengthening Iran’s position on the Arabian Peninsula. Furthermore, in addition to benefiting from increased access to American-made weaponry, terror groups like Al Qaeda have capitalized on the chaos brought about by the near-collapse of the Yemeni state and solidified their foothold in the war-torn country. The longer the conflict rages and the more American-made bombs are dropped on civilians, the easier it becomes for groups like the Houthis and Al Qaeda to recruit new generations of militants into their ranks. The Saudi campaign has become self-defeating.

Ending American support for the coalition and threatening to suspend arms sales to its leading members would force Saudi Arabia and the UAE to end or dramatically reduce their military operations in Yemen. “The Saudi military is heavily dependent on U.S. weapons and support, and could not operate effectively without them,” according to a report from the Center for International Policy. Additionally, while the UAE’s offensive is largely ground-based and relies more on the daily cooperation of mercenaries than it does the United States, America can still influence Emirati policy due to the UAE’s strong reliance on American arms sales.

Saudi Arabia and the UAE depend broadly on American military support to guarantee their regional security and would be far more likely to begrudgingly comply with American demands than risk alienating their most important ally. If nothing else, ending weapon sales would drastically disrupt their ability to conduct military operations in the short-term while putting at risk the supply of weapons they need on to continue the war in the long-term.

Furthermore, while the United States has a vested interest in eliminating Al Qaeda’s foothold in Yemen, it can continue its solo campaign against the terror group even while withdrawing support for the fight against the Houthis. If nothing else, a strong U.S. response to the revelations of Saudi and Emirati mishandling of American arms coupled with a threat to stop future arms sales would reduce the likelihood that American weapons would be transferred to these militias in the future, imperiling the survivability of these groups in the face of America’s counter-terror offensive.

The United States must also demand greater Saudi and Emirati leadership in the pursuit of peace in Yemen. Yemen’s rival factions made some progress in recent peace talks in Stockholm, but no long-term peace can be attained without participation from the outside powers responsible for turning an internal conflict into a regional proxy war. Any political settlement must include Iran, Saudi Arabia, and the UAE, and pushing the coalition to initiate this process and offer a mutual cessation of violence could open the door for such negotiations. Even if a comprehensive end to the fighting remains unattainable now, a real contract among these outside actors to reduce their military involvement in Yemen, facilitate humanitarian aid efforts, and agree in principal to accept a future power-sharing agreement between the internal combatants would still markedly improve the daily realities of millions in Yemen.

This strategy is certainly not without risk; ending American participation and undercutting Saudi and Emirati efforts in Yemen’s civil war could result in greater Iranian empowerment through the success of the Houthis or could, as former Defense Secretary James Mattis warned, result in the loss of civilian life if Saudi Arabia continues its bombing campaigns absent the support of American intelligence or targeting assistance. However, both of these scenarios are happening now even with America’s involvement, and Saudi-led efforts to broker a political settlement could only stand to improve the deteriorating conditions on the ground. American military support has proven insufficient to prevent Iranian influence from spreading into Yemen or spare civilians from the horrors of the conflict, and there is no reason to suspect that continuing these failing policies will eventually bring about a different end.

The revelation that American-made weapons are being transferred to the very forces in Yemen that the United States actively opposes is emblematic of the broad failings of the coalition’s efforts in this war. For far too long, America has allowed its allies to operate with impunity at the expense of the Yemeni people and its own national interest, and the United States must leverage its influence over the coalition leaders to change their behavior for the better. America in no way benefits from the destruction of Yemen, the spread of American weaponry to militants affiliated with Al Qaeda or Iran, or the reputational damage caused by its association with this humanitarian disaster. America must act accordingly to reduce the violence in Yemen and promote a peaceful resolution to the conflict, even if doing so means standing up to its allies.