America Never Had a Syria Solution 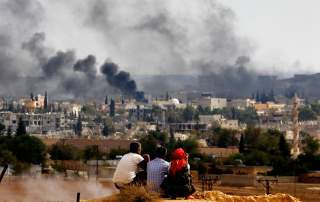 Trump’s decision in December 2018 to withdraw and use Iraq to “watch” Iran did not come to fruition. Instead, the United States stayed, fighting ISIS in Baghouz until March 2019 when tens of thousands of ISIS supporters and their families, including thousands of foreigners from dozens of countries, surrendered. Turkey now changed its rhetoric and increased threats of an invasion of eastern Syria. It had vowed to return the area to its “true owners” in 2018 and a call from Erdogan to Trump had convinced the U.S. president to leave. Subsequent threats in the spring and summer of 2019 revealed that Turkey demanded a “safe zone” along the border that it would control up to a depth of some twenty miles.

Turkey said that its view of the security mechanism was to pave the way for it to take over a border area of eastern Syria and Erdogan said at the UN that Turkey would resettle millions of Syrians, mostly Arab refugees from other parts of Syria, along the border. But U.S. EUCOM said it was doing joint patrols to address Turkey’s security concerns. The SDF was even convinced to dismantle forts near the border to address this security concern, which now looks like merely a way that Turkey got the United States and SDF to remove obstacles to its offensive. Commanders on the ground in eastern Syria appear to have been kept out of the loop as to the larger goal in Ankara and also the phone call that resulted in Trump deciding on October 6 to withdraw.

Erratic policy from Washington had already left the SDF wondering about U.S. commitments. Yet the SDF was being asked by the international community to hold thousands of ISIS fighters and supporters, which countries refuse to repatriate. U.S. Inspector General reports have warned about radicalization among the detainees and the need to secure them. Yet the White House On October 6 says Turkey will be responsible for “all ISIS fighters captured over the past two years.” Ankara is spelling out an operation that will begin in pieces, first near Tel Abyad and then continuing down the border. It envisions a $27 billion program to resettle refugees in more than one hundred new communities, apparently stripping locals of land rights, something many Kurds see as demographic change akin to what was done in Afrin. Turkey has been warned against an invasion by members of Congress and European officials.

A look back at U.S. policy in Syria reveals several mismatched goals. An initial attempt to oppose Assad and arm rebels was largely a failure. The 2015 Iran deal may have reduced pressure on Assad. Russia vastly increased its role in Syria in 2015 and soon it was working with Iran and Turkey on ceasefires, excluding the United States. The United States was not only excluded by other major powers involved in Syria, Washington also excluded its own SDF partners from any role in Geneva or the constitution committees that were supposed to meet there to discuss Syria’s future. This was largely because of Ankara’s pressure, meaning that U.S. partners who controlled a third of Syria had no say in the country’s future.

The United States systematically cut itself off from a role in the diplomatic process and support for the rebels, eventually winnowing U.S. policy down to an important piece of eastern Syria. However, the United States released conflicting policy goals for eastern Syria, talking about stabilization and using it as leverage against Iran. Promises of Gulf investment to rebuild never materialized fully. The first withdrawal decision in December 2018 ended any idea of really reconstructing eastern Syria. It became solely a military mission without a civilian or diplomatic component. The United States never wanted to take responsibility for the thousands of ISIS detainees and the rest of the Coalition also abjured responsibility. This was a way to end a war by losing the peace.

The United States never reconciled Turkey’s demands with a clear reply. From the time Biden and Kerry both seemed to oppose the SDF’s campaign in Manbij, even as the Pentagon seemed to support it, there was a disconnect. The disconnect never ended and continued through to the security mechanism where Ankara openly said it would invade while the United States appeared to believe that a few security patrols were all that was needed.

The U.S. role in eastern Syria began with mission creep from Iraq across the border to defeat ISIS.  It was a model of military success of the “by, with and through” method of training local fighters to do the fighting. But it illustrates the problem of having a narrow military objective and not having policymakers and diplomats all on the same page with regional powers and local partners. Most countries, including Turkey, Iran and Russia, do not train and equip locals only to then leave them to be attacked. The U.S. behavior in eastern Syria is remarkable in the end for a lack of foresight and long-term planning, a process that all of the other countries in Syria appear to have had in their favor. This is not solely the result of the Trump administration’s erratic policies or having different visions by Bolton, Mattis and others. The Obama administration also did not spell out a long-term goal. This was exacerbated in the Trump administration due to lack of coordination. The likelihood that Russia, Iran and Turkey will all view this as a defeat for the United States decreases U.S. influence in Syria and neighboring countries. Regardless of whether the United States now slows its withdrawal, as some have suggested, it still does not provide answers for the local people who fought to liberate themselves from ISIS, or for the ISIS detainees who are a global threat.