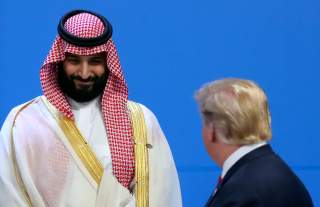 One of the intriguing things about grand strategy and the great game is how slowly professional practitioners in the field clearly see material strategic changes when they occur. A compelling example is how alone Winston Churchill stood in Depression-era Great Britain against the rise of Adolf Hitler. He was mocked for years by the “experts” and his peers in the House of Commons.

Today in the Middle East the United States faces a material strategic change, one that should be capitalized upon with all due dispatch. The result is a policy pivot back to a primary focus on great power diplomacy, and not endless, mindless, mini-wars in the Middle East that cost far too many American lives and drain our country of its resources.

What is the game changer that almost no one has fully recognized or appreciated? American shale oil and gas. America no longer needs oil and gas from the Middle East. Whether domestic supply or other suppliers outside the Middle East, there are ample fossil fuel resources to supply our energy needs for as long as we rely predominantly on oil and gas. President Donald Trump gave the first sign he has caught on to this state of affairs when three weeks ago he said that China, India, Japan, and others should be protecting shipping through the Strait of Hormuz, not the United States, as we do not need OPEC’s oil and gas anymore. One can argue the merits of U.S. disengagement in the Strait, but not the need for Middle Eastern energy—he is right, and we do not.

The United States from 1979 until recently had two core strategic interests in the Middle East: (1) energy; and (2) containment of Iran/support of Israel. With our primary interest permanently removed, the geopolitical chessboard in the Middle East is irreversibly altered, and the U.S. global hand has been strengthened—we truly are energy independent and not reliant on despotic countries for energy supply. So what remains as a core U.S. interest is regional stability. Fortunately, stability is not a unilateral U.S. concern. Israel, Saudi Arabia, Jordan, Egypt, the Emirates, and countless other states share our concern.

And while Israel must remain a core U.S. ally, we need to recognize Israel for the independent, wealthy, powerful state it is today—Israel is a nuclear power and an effective actor on the world stage, not an outnumbered, helpless victim of Arab oppression. While our commitment to Israel remains firm and unaltered, we need to let Israel take a stronger global position, as a friendly independent actor, and not carry so much responsibility to “big brother” Israel in every security or financial instance. Most Americans are completely unaware that from 1985 until today, Israel’s per capita GDP has risen from $7,000 per Israeli to over $41,000. And through the Leviathan offshore oil field discovered by Noble Energy of Texas, Israel is energy independent. So outside of foreign aid related to military purchases by Israel from the United States, they do not require excessive financial state support from us. Israel’s transformation over the past several decades from a socialist, collectivist, agricultural state to a full-throated capitalist society (which Prime Minister Benjamin Netanyahu and the Israeli entrepreneurial class should get large credit for) is something both to celebrate and not ignore in assessing what U.S. commitments to Israel and the overall region should look like prospectively.

Now as to Iran—neoconservatives would argue that we can never detach from the Middle East, and must continue to sacrifice thousands of American lives and spend trillions of American dollars in endless wars to counter the Iranian threat. They are partially correct—American military bases in the Middle East must be maintained, and we must continue a policy of Iranian containment and pressure. Having said that, our posture vis-à-vis Iran has not changed since the Ayatollah Ruhollah Khomeini seized power forty years ago. Arguably, our position has worsened, through the pointless war against Iraq crippling our key regional counterweight to Iran. Over a decade later Iraq is still in recovery. Certainly, an Iranian nuclear threat is one to take seriously, and may require coordinated military preemptive action at some point with our allies in the region. But after sacrificing thousands of American lives and wasting enough money to save social security and put a significant dent in our unfunded Medicare and Medicaid liabilities, we are arguably worse off in the region than we were before. New thinking is required and long overdue.

A rational, wise pivot in U.S. policy due to our energy independence from OPEC should contain the following elements:

1. The formation of a Middle Eastern NATO with Saudi Arabia, Egypt, Jordan and the UAE as the central leaders (and with Israel as an informal member, and hopefully one day, as an official member). Let these nation states “grow up” as actors on the world stage and take primary responsibility for the stability of their own “neighborhood,” with total U.S. support.

2. Maintain U.S. national security support for Israel, but shift our focus on the bilateral relationship from military concerns to economic trade and the advancement of business ties between our countries. Israel is in a strong position to defend itself, with quiet and persistent U.S. support, and we should be more focused on the “Start Up Nation” as a trading partner and source of business development, both ways. We need more Israeli investment in the United States, and more U.S. investment in Israel.

3. Maintain U.S. military strength in the region through our bases and naval presence, but actively cede more responsibility to the responsible local actors.

4. Shift more responsibility for the navigability and stability of the Strait of Hormuz to the primary consumers of OPEC crude. A U.S. presence should always be maintained, but the Strait being open for business should not be our sole or even primary responsibility.

5. Reduce or eliminate U.S. foreign aid to all nation states save for those participating in Middle Eastern NATO and/or our true, longstanding friends in the region. U.S. taxpayer dollars should be utilized far less and more strategically.

6. Be far more resistant to the reckless spilling of American blood on the sands of the region. Be far more reluctant to engage militarily unless there is a compelling U.S. security interest or an immediate threat. Be far more protective of taxpayer money and the solvency of the American Republic.

We have not been in a great-power-dominated world since the end of the Cold War. We’ve almost forgotten what that looks like, thus our ignorance at the stunning transformation in the strategic framework in the Middle East, after thirty years of mostly reckless, ineffective U.S. policies and actions in the region. The effectiveness of prospective American foreign policy hinges on how we engage with China, India, Russia, the European Union, and other significant global nation states, in precisely that order, not with how we engage the Middle East. It’s time for U.S. policymakers to recognize the “once in a generation” changed strategic circumstances, pivot decisively and accordingly, and in the process saving countless American lives while halting the needless waste of American resources.

George Seay is chairman of the Clements Center for National Security at the University of Texas at Austin, as well as Chairman of the Texas-Israel Alliance.