America Is Quietly Expanding Its War in Tunisia 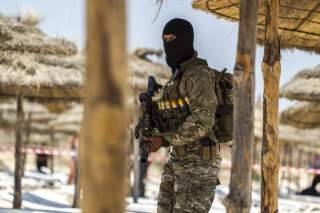 Last month, a U.S. Africa Command spokesperson confirmed in a Task & Purpose report that Marine Corps Raiders were involved in a fierce battle in 2017 in an unnamed North African country, where they fought beside partner forces against militants of Al Qaeda in the Islamic Maghreb (AQIM). AFRICOM acknowledged that two Marines received citations for valor but withheld certain details, such as the location—undisclosed due to “classification considerations, force protection, and diplomatic sensitivities.” The command also said the Marine Special Operations unit was engaged while on a three-day train, advise and assist operation. However, subsequent research and analysis strongly suggest U.S. involvement runs much deeper. In fact, the dramatic events described in the award citations obtained by Task & Purpose align with those that took place in Tunisia, which has been combatting a low-level insurgency in its western borderlands for the past seven years. Evidence indicates the battle occurred at Mount Semmama, a mountain range in the Kasserine governorate, near the Algerian border. There, the United States sustained its first casualty in action in Tunisia since World War II.

While not of the same magnitude, the events that AFRICOM confirmed took place on Feb. 28, 2017, echo a disastrous ambush less than seven months later in the village of Tongo Tongo, Niger. In that battle, members of the Islamic State in the Greater Sahara killed four Army Special Forces soldiers and four Nigerien partners. U.S. partner forces engaged militants of AQIM’s Tunisian branch, the Uqba ibn Nafaa Battalion (KUBN) in a firefight, which resulted in the killing of one militant. The engagement also necessitated a request for air support to rout the militants. The jihadis then attempted to flank the joint U.S.-Tunisian force from the rear, forcing the Marines to return fire. While engaged on the ground, U.S. forces were also part of the air-support component. When a Tunisian soldier manning an M60 machine gun aboard a helicopter sustained wounds after being shot twice by militants returning accurate fire, a U.S. Marine Raider took control of the machine gun to maintain suppressive fire against the militants and simultaneously treated the wounded Tunisian soldier. The Marine Raider unit and their Tunisian partner force each sustained one casualty in the battle, both of whom recovered from their wounds. At the time, local media reported the incident without alluding to any U.S. participation.

Eventually, Tunisian forces secured the site of the battle and seized an Austrian Steyr AUG rifle, ammunition, and other supplies. Two jihadis were killed in action: a Tunisian and an Algerian. The latter was a veteran insurgent who was wounded a decade earlier by a U.S. airstrike while fighting under the banner of Al Qaeda in Iraq, according to a biographical note published by Al Qaeda’s North African affiliate. However, any U.S. involvement in connection to his death was never mentioned.

The United States has maintained a military presence in Tunisia for at least four-and-a-half years, rendering it unlikely that the events of Mount Semmama were an isolated incident limited to a mere advisory role, as the AFRICOM spokesperson claimed. The battle involving U.S. troops occurred amid an intense campaign aimed at dislodging militants from their mountain stronghold. Eleven days before the jointly conducted U.S.-Tunisia operation, another operation had taken place at a nearby location at Mount Semmama, also resulting in the killing of two militants. It is presently unknown whether U.S. troops participated in the preceding operation. It remains an open question as to whether the knowledge of the U.S. encounter in Kasserine would have eventually surfaced had Task & Purpose not filed a Freedom of Information Act request. It was that request which prompted AFRICOM’s release of the partially redacted commendations for valor awarded to two Marine Raiders for their actions at Mount Semmama.

Since its 2010 revolution, Tunisia has carried a burden of expectations as a regional model for democracy, challenged with building political consensus, a staggering economy, a population yearning for progress, and rising security challenges. In this context, the United States has sought to sustain Tunisia’s shaky democratic transition primarily by shoring up its military, which received steadily increasing security assistance from 2014 to 2017. Tunisia now receives more U.S. defense aid than any other country in North Africa and the Sahel region, except for Egypt.

The U.S. military presence has been continuous since February 2014, when the Pentagon deployed a team of several dozen special operations troops to a remote base in western Tunisia. Tunisian soldiers accompanied by U.S. military advisors have on at least one occasion discovered and observed a populated militant camp in Kasserine. In the years since, the Air Force component of AFRICOM has frequently flown intelligence, surveillance, and reconnaissance missions across Tunisia from bases in Sigonella and Pantelleria, Italy. In the wake of the March 2015 terrorist attack at the Bardo Museum in Tunis, U.S. forces provided operational assistance to a counterterrorism operation targeting core members of KUBN in the town of Sidi Aich, Gafsa. U.S. staff and drones have also operated out of the Sidi Ahmed Air Base in Bizerte.

The U.S.-Tunisia partnership in the military and security domain is multifaceted. It is composed of defense capacity-building, strengthening border security, and as is so often emphasized, training partner forces in counterterrorism strategies and tactics. However, the questions of U.S. troops and drones operated out of Tunisia have been a source of polemic and its sensitivity should not be underestimated. American foreign policy is generally unpopular and unfavorable attitudes toward the United States are widespread in Tunisian society. For instance, in 2012 protesters outraged by an anti-Islamic short film ransacked the U.S. embassy and set fire to a nearby American school in the capital of Tunis. More recently, the U.S. decision to recognize Jerusalem as Israel’s capital triggered a wave of protests across Tunisia. The issue of U.S. military presence has also sparked controversy, being the subject of heated debates at the Assembly of the Representatives of the People, Tunisia’s parliament. On numerous occasions, there has been pressure on President Béji Caid Essebsi and Prime Minister Youssef Chahed on the matter of national sovereignty. Furthermore, the revelation of the clash in Kasserine eighteen months ago testifies to a deeper level U.S. involvement on the ground than AFRICOM is willing to admit. The details of the 2017 battle at Mount Semmama contribute to a slowly growing public understanding of the expansion of covert and overt military action on the African continent, where the United States is secretly at war.

Héni Nsaibia is a researcher at the Armed Conflict Location and Event Data Project (ACLED). He is also the founder of Menastream, a risk consultancy providing intelligence analysis. Follow him on Twitter: @MENASTREAM.