America Was Always Going to Dump the Kurds 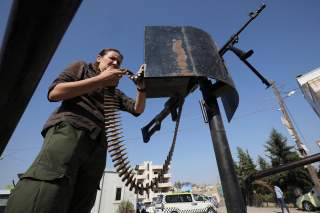 The Turkish Army rolled across the border into northeastern Syrian last week, beginning a campaign to clear the border region of Kurdish fighters. The 50–100 U.S. troops previously in the area withdrew on President Trump's order, leaving their erstwhile Kurdish allies in the Syrian Democratic Forces (SDF) to the tender mercies of the Turks. Dozens have been killed, and an estimated 160,000 civilians have fled the fighting. Trump dispatched all of his national security heavyweights to attempt to find a resolution: National Security Advisor Robert C. O’Brien, Vice President Mike Pence, and Secretary of State Mike Pompeo are all in Ankara. Yet Turkish President Recep Tayyip Erdogan has rejected calls for a ceasefire.

The reaction to Trump's pullback has been immediate and nearly unanimous. Pundits denounced Trump for betraying the "ally" who had defeated ISIS, albeit with ample American aid. Special Forces soldiers who fought beside the SDF told reporters about their shame. Congress, despite never authorizing the war in the first place, is incensed about any potential U.S. drawdown in Syria. But this rejection of the Kurds was always going to happen sooner or later. Though Trump appears to have left the Kurds in a particularly peremptory and callous manner, the real issue is the way in which America habitually acquires, arms, and then abandons partners of convenience.

The United States chose not to employ many of its own troops in the campaign against ISIS – a war that was existential for Kurds but not for Americans. Outsourcing America’s fighting has consequences though. Despite the assurances of both politicians and military cheerleaders who write books with titles like “One Hundred Victories,” proxy warfare has ample costs. Many of these are borne by the proxies themselves, as Syria’s Kurds have now been reminded.

The Kurds are as sympathetic a partner as one could hope to find in today’s Middle East. Secular, Westernized, and egalitarian, Kurds have carved out autonomous regions in both Iraq and Syria. Blue jeans and beer are on offer in Iraqi Kurdistan’s Erbil, while the Syrian Kurdish Women’s Protection Units (YPJ) famously employs women in combat on the frontlines and aims to establish a socialist utopia when the fighting ends. The People’s Protection Units (YPG) even drew a few American volunteers, in an echo of the Abraham Lincoln Brigade volunteers who fought fascism in the Spanish Civil War.

Yet the Kurds remain without a country of their own. At 30 million people, Kurds are the largest stateless nation in the Middle East. A quick look at a map shows why. The Kurds sprawl across four countries: nearly half are in Turkey, with the rest divided between Iraq, Iran, and Syria. None of those countries would allow a Kurdish state, and all have fought intermittently to prevent the formation of one. Some are willing to grant the Kurds varying degrees of autonomy. Instead of enabling that autonomy within Bashar Assad's Syria, a tough but necessary pill to swallow, U.S. officials ordered American forces to remain in the Kurdish region, encouraging fantasies of a Kurdish state.  Faced with confronting Turkey alone, the Kurds did what they were always going to have to do, and concluded a hasty deal with Assad. Russia has been the biggest beneficiary.

The Turks have fought a brutal war against the separatists of the Kurdistan Workers’ Party (PKK) for nearly four decades. The Turks were never going to tolerate a Kurdish statelet on their border. Turkey has become an increasingly authoritarian country and a perfidious actor with regard to ISIS in Syria. Yet it remains a NATO ally, boasting the alliance’s second-largest army and hosting both a U.S. airbase and U.S. nuclear weapons. American abandonment of Syria’s Kurds in favor of Turkey was inevitable. It was only a matter of when.

Unfortunately, America has a long and ignominious history of doing this. We hung Iraq’s Kurds and Shias out to dry in 1991, inciting them to rise up against Saddam Hussein and then watching as his still-potent Republican Guard crushed both rebellions and killed tens of thousands. A generation earlier, America built, nurtured, and then abandoned the Republic of Vietnam, leaving tens of thousands to die and hundreds of thousands to suffer in re-education camps.

America has severed battlefield allies even within our own borders. The Apache scouts who helped the U.S. Army track the legendary Geronimo were promptly disarmed and sent to the same prison as the man they had just defeated.

What we just did to the Kurds will be dwarfed by what we do to the Afghans soon: millions who put their faith in American support will be left to fight the Taliban alone, because the United States sought unattainable victory for far too long instead of settling for a negotiated exit.

Syria's Kurds weren't the first partner to experience American abandonment, and they won't be the last. America's refusal to make temporary allies into permanent clients is a feature, not a bug: we have existential interests in none of these conflicts, while most of the other actors do. The solution is not braying about national honor and pretending "this time will be different." Instead, the United States should reject foreign policy hubris and fight limited wars for realistic endstates only when absolutely necessary for U.S. security and prosperity. Doing otherwise not only results in wasted American blood and treasure; it also dooms America’s battlefield partners to more fighting, seeking victories that neither we nor they can achieve.

So has America betrayed Syria's Kurds? Yeah, more or less. But when the dust settles, and the handwringing stops, we should have an honest conversation about how to avoid another inevitable betrayal of our next ally of convenience.

Gil Barndollar is the Military Fellow-in-Residence at the Catholic University of America’s Center for the Study of Statesmanship and a Senior Fellow at Defense Priorities. This first appeared in RealClearDefense.