America Went to Afghanistan to Fight Al Qaeda, Not to Transform a Nation 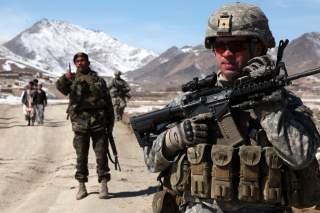 “Comms blackout” is a phrase you never want to hear while deployed. I didn’t know what it meant until November 13, 2009. That day a soldier in our unit was killed by an improvised explosive device in the Sayed Abad district of Afghanistan’s Wardak province. He, like the rest of us, had been sent to the country to support Operation Enduring Freedom.

In a communications blackout, lines go “black” to prevent soldiers from contacting the friends or family of the deceased until two soldiers, dressed in Class A uniforms, can knock on the next of kin’s door to give them the devastating news.

This grim process has happened more than 2,296 times since the start of the war in Afghanistan, now called Operation Freedom’s Sentinel. Over and over and again the bodies of U.S. troops have been flown to Dover Air Force Base with U.S. flags draped over them, carried off by a military detail, and transferred to the Air Force Mortuary on base. There, the Armed Forces Medical Examiner confirms identification through dental impressions and photographs, and autopsies are performed to identify the cause of death. Those servicemembers are then dressed in pristine uniforms and transported to their hometown with a military escort.

After the Camp David fiasco, National Security Advisor John Bolton’s firing, and the Afghan peace talks with the Taliban declared “dead”—there is still no plan for withdrawal. Troops are still fighting in Afghanistan and the death toll number is increasing every day. This is unacceptable. The blood that America has put into this war is honorable and far beyond duty.

The United States accomplished a swift victory in Afghanistan after 9/11 by targeting Al Qaeda and the Taliban who harbored them. This is when we should have exited instead of pursuing an  unattainable, unnecessary nation-building campaign to stabilize the Afghan government. The war in Afghanistan today is unrelated to the initial mission—it is now about Afghan security, not American security. It has evolved into a perpetual rotation of troops on the ground with no clear strategic aim. Soldiers with six, seven, or even eight deployments are sent to risk their lives again because the war keeps moving along with no end in sight.

Prolonging this conflict has drained power from the United States with no justifying benefit. Nearly two decades in, too many Americans and Afghans alike are dying while Washington dithers. Just recently, a rocket exploded near the U.S. Embassy in Afghanistan, a U.S. soldier was killed by a vehicle-borne improvised explosive device, and a suicide bomber killed more than eighty people at a Kabul wedding while Taliban militants killed fourteen pro-government militia members and civilians in Herat Province.

Time in country and troop numbers will never be enough to impose an external military solution to Afghanistan’s internal and idiosyncratic political problems. Even with one hundred thousand boots on the ground, the United States was still unable to end Afghanistan’s civil strife. Moreover, continuing to fight in Afghanistan will not make America safer or prevent another 9/11—if anything, it will take resources away from efforts that do make America secure. The United States will remain safe because of our global ability to monitor and disrupt anti-U.S. terrorists anywhere, including Afghanistan—without a permanent ground presence—and our unmatched deterrent capabilities.

A full troop withdrawal from Afghanistan is undeniably necessary. Another “comms blackout” is unacceptable. Another final roll call is unacceptable as is one more Taps played on a bugle, one more twenty-one-gun salute, and one more life taken away for a war that has already been won.

Kara Ann Caldwell is the communications manager at Defense Priorities and a former Army Reservist who deployed to Afghanistan in support of Operation Enduring Freedom in 2009.