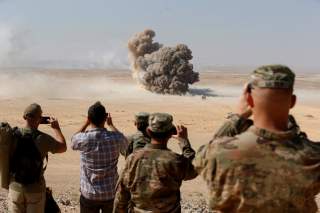 U.S. commanders leading the war on ISIS are trying to extricate troops from Syria in an orderly manner. This is the only orderly thing that seems to be happening in Syria.

The Assad regime was rushing to control checkpoints at key locations while Turkey pressed its offensive on October 15, just nine days after the White House decided to wrap up America’s five-year war in Syria. Washington says it isn’t ending the war on ISIS though, so it’s possible airstrikes and even special operations may continue in Syria, run from Iraq or elsewhere.

The U.S. decision to suddenly leave Syria has been excoriated as a betrayal yet also received some praise for ending the relationship with the Syrian Democratic Forces, which Turkey accuses of being linked to the Kurdistan Workers Party. That means the U.S. decision to leave Syria can be viewed through the lens of reversing an Obama-era policy of working with the Syrian Democratic Forces (SDF) instead of the Syrian rebels. But if anyone thought the United States was pivoting toward opposing the Assad regime and Iran, that isn’t the case. Assad, Iran, Russia and Turkey are swooping in to grab the spoils.

It’s no use arguing over what might have been in eastern Syria. The war is over and the United States has to decide what its role is after Syria. This could become a key point in U.S. foreign-policy history—the bookend to George H. W. Bush’s “new world order” where America eschews its role as global hegemon, or global policeman, as it has sometimes been seen. This could also be a domino effect, causing the United States to lose more influence in Turkey, in Iraq, and potentially the Gulf as well.

Let’s look at the real estate leftover after Syria. The United States is engaged in an eighteen-year war in Afghanistan that Trump has called an “endless war.” As such, he wants to leave Kabul the way the United States left Syria. That could happen at any time. Washington jettisoned an agreement with the Taliban that envoy Zalmay Khalilzad had been working on with the Taliban and the Qataris. But the United States could still withdraw without a deal. This would open Afghanistan to Pakistani and Russian influence, as well as India and Iran, who are looking to play a greater role. China is also on the eastern flank, it will want a say because its Belt and Road initiative prefers stability in Central Asia.

In Iraq, U.S. forces are operating at the invitation of Baghdad. This is a key challenge because Iraq is in crisis amid the recent protests in September that killed up to 150 people. There is evidence snipers targeted protesters, and it is unclear which security units ordered the shooting. This is part of a larger problem in Iraq that involves controversy about Iran’s role in the country. There are several parties in Iraq that are close to Iran, including the second most powerful party run by Hadi al-Amiri. Amiri, head of the Fatah Alliance, worked with the IRGC in the 1980s, and his Badr Organization is a key component of the Popular Mobilization Units—a group of mostly Shi’ite militias that are not an official paramilitary force. Former Prime Ministers Nouri al-Maliki and Haider Abadi both run political parties and they are open to Iran’s role in Iraq. As for Muqtada al-Sadr, who has been seen as an Iraqi Shi’ite nationalist, he went to Tehran in September to meet IRGC Quds Force commander Qassem Soleimani and the Supreme Leader Ali Khamanei.

With this makeup of Iraq’s politics and paramilitary field, it is clear that the United States has only a tenuous link to the future of Iraq. It’s true that the Washington helped usher in this future, but American forces could be asked to leave, as some pro-Iranian voices have suggested. This would weaken the Kurdistan Regional Government, the autonomous region in northern Iraq that has been a key partner with the United States on Iraqi stability. The fall of the SDF in eastern Syria has been seen as a having ramifications for the KRG.

In the Gulf, the inability of American missile defense and Saudi Arabia U.S.-equipped military to stop the Iranian cruise missile and drone strike on Abqaiq in September was a setback for American interests. Now more U.S. forces are heading to the Kingdom. It’s not clear what those forces will do, since it appears that Iran is putting out feelers to the UAE and Saudi Arabia. Iran thinks its supply of drone and missile technology to the Houthis has helped them humiliate the Saudis and turn Yemen into Riyadh’s Vietnam. After almost five years, Saudi Arabia and its allies would like to end the conflict. An additional problem for the United States is that Russia’s president Vladimir Putin was recently in Riyadh, cementing a growing Saudi relationship with Russia. This is symbolic because, one after another, countries in the region are looking to Putin as a consistent policymaker in light of the U.S. zig-zagging.

The United States has a key partner in the Kingdom of Jordan, where it recently conducted the Eager Lion exercise with eight thousand troops from almost thirty countries, showing that Jordan is part of the link of stability in the region between the Gulf and Israel. But Jordan is displeased with Trump’s “deal of the century” and sidelining of the Palestinian Authority. It has a cold relationship with Israel.

The U.S.-Israel relationship is going swimmingly—Rafael’s Trophy defense system was recently supplied, in partnership with Leonardo, for the Abrams tank. But there were concerns in Israel about the United States abandoning the Kurds in Syria. Could Israel be next, some wondered. Jerusalem is hamstrung by its desire to remove Iran from Syria while Iran seems to be going from strength to strength.

In Lebanon, the United States faces the same problem as Iraq. It wants to support the official security forces, but Iranian-backed Hezbollah likely benefits from investment in the country.

In Egypt, a key partner since the Camp David era, the current regime is less and less tolerant of critique. It is fighting ISIS and supporting Khalifa Haftar in Libya. Washington would like to forget the Libya problem, but America played a key role in toppling Qadaffi and lost Ambassador Christopher Stephens in Benghazi in 2012. Will the U.S. role in Syria be forgotten like in Libya? If so, it will show that Washington has abdicated a role in one country after another.

The elephant in the room may be U.S.-Turkey relations. Turkey’s president is still supposed to be coming to Washington, but U.S. sanctions on Turkish officials may not pave the way for that visit. Regardless, Turkey is working more closely with Russia, buying the S-400 air defense system and conducting trade with Iran. It also wants to challenge Cyprus and the EU on energy in the Mediterranean. It is leading opposition to U.S. policy on Jerusalem. Long term, there doesn’t seem to be way to salvage U.S.-Turkey relations, even though officially the countries will continue to be allies.

The current setup in the Middle East could be the most challenging for the United States in recent memory. In the 1950s, Washington led through the Baghdad Pact. Later, despite setbacks in Iran or the oil embargo, it gained partners such as Egypt. In the 1990s, U.S. global hegemony was felt most strongly in the Middle East. But Iraq conflict expended a lot of energy and led to fatigue for the “endless wars” that Trump dislikes. The next U.S. administration, whether Trump or someone else, will also likely reduce U.S. influence, or keep it static.

What can be done? Growing the defense technology development partnership with Israel is good for both countries. In Jordan, drills like Eager Lion help cement what remains of the U.S. partnerships in the region and Europe. In Iraq, the only real option is to balance Baghdad through close relations with Erbil and encouraging the KRG as an anchor of stability at that key geographic juncture between Iran, Turkey and Syria. On Iran, the maximum pressure campaign has not reduced Iranian influence in Iraq and Syria, and Tehran is keen to show that it can get around the sanctions.

The Afghan war, in contrast to Syria, is truly an endless war. A U.S. withdrawal could lead to chaos but staying isn’t projecting American power. Other U.S. partners such as Egypt and Saudi Arabia have involved themselves in conflicts, such as in Libya and Yemen, that the United States does not seem to care about. Both weak states will continue to contribute to instability around them.

The United States doesn’t want to play a larger role, so it doing nothing appears to be the only choice. Across a swath of the Sahel, the United States is engaged in small campaigns to aid governments using special forces. That campaign is achieving only limited results but is linked to the methodology behind the Syrian War of working “by, with and through” locals.