America's Syria Free Zone Will Come at a Price 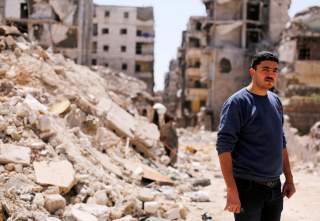 Turkey and the United States appeared to climb down from another crisis in eastern Syria in early August. The agreement to coordinate the establishment of a “safe zone” along the Syria-Turkish border leads to another stage in a process that began in December when the White House announced that the United States would leave Syria. It is a process that neither pleases Turkey nor U.S. partners on the ground among the Syrian Democratic Forces—and it likely ensures more crises in the future.

The decision by President Donald Trump to withdraw from Syria in December 2018 was presaged by threats from Turkish president Recep Tayyip Erdogan to “turn the east of the Euphrates into a peaceful and livable place for its true owners just like the other areas we have made secure in Syria.” Tukey had asserted last year that ISIS was defeated and that it could deal with eastern Syria if the United States left, including tamping down ISIS remnants. This threatened a collapse of eastern Syria as the political echelons linked to the SDF opened discussions with Damascus and scrambled to send a delegation to Washington in January to encourage the United States to stay.

In the end the United States did stay in Syria, seeking a slow drawdown and asking European countries to contribute more troops. The “safe zone” concept has been increasingly floated since January 2019 with claims that it could reach thirty kilometers into Syria and run along some four hundred kilometers of border to the Euphrates river. That’s around the size of Connecticut and takes in most of the Kurdish population centers of eastern Syria. U.S. officials and lawmakers, such as Sen. Lindsey Graham, have said that while the United States understands Turkey’s concerns, the United States should not ditch its SDF partners who defeated ISIS in eastern Syria, liberated Raqqa, and lost thousands of fighters between 2014 and 2019.

The Pentagon understands the importance of keeping eastern Syria stable, detailing in a Department of Defense Inspector General report released on August 6 how the U.S.-led coalition against ISIS was investing in training 110,000 security forces in eastern Syria. The Pentagon report details how the drawdown since December has led to concerns about ISIS resurgence and also notes that the Syrian Democratic Forces in place today face challenges securing former ISIS supporters in detention facilities. In short, eastern Syria needs more investment and yet the crisis with Turkey continues to bubble up every few months at the most critical time.

U.S. envoy James Jeffrey, who is both the Special Representative for Syria and the anti-ISIS envoy, went to Turkey on July 22 to seek to avert the latest Turkish threat to launch a military operation into eastern Syria. Media in Turkey emphasized that Ankara was serious this time about launching an operation, one it has threatened to do for a year. Ankara’s calculations here are multilayered. Prior to the Afrin operation in January 2018, where Turkish forces and Turkish-backed Syrian rebels attacked the Kurdish People’s Protection Units (YPG) in an area they held in northwest Syria, Ankara had warned about the operation for months. The key came in January 2018 when Turkey was able to get assurances from Russia about using Syrian air space. Turkish foreign minister Mevlut Cavusoglu said in July 2019 that Turkey would launch the operation if the safe zone was not established. Anadolu’s report at the time noted that Turkey’s threats were also tied to the S-400 controversy where Turkey has purchased Russia’s air defense system and the United States has sought to remove Ankara from the F-35 program. “The move might trigger a unilateral Turkish military operation,” Turkey’s Anadolu news noted

Erdogan said on July 26 that Turkey was “determined to shatter the terror corridor east of the Euphrates, no matter how the negotiations with the U.S. concludes.” Turkey views U.S. partners among the SDF, particularly the YPG, as part of this “terror corridor.” He said, “those who put their trust in foreign powers in the region will be put underground.” These are harsh words from Turkey. Ankara directly links the potential operation in eastern Syria with the F-35 and S-400 issue, which appears to show that the threat of the operation is meant to deter the United States from sanctions over the S-400. Yet Ankara insists that in either scenario it will eventually go into eastern Syria. The only way to avoid this is for a safe zone that is largely on Ankara’s terms.

The United States scrambled in late July and the first days of August to prevent the operation. Turkey said it could not tolerate the “cancer” on its southern border, while recently appointed U.S. Defense Secretary Mark Esper said any operation would be unacceptable on August 5. As if on cue, someone used the Special Operation Joint Task Force Twitter account for Operation Inherent Resolve to tweet on August 5 that “our partners in northeast Syria have sacrificed much to consolidate gains and keep peace and stability.” The following day, another coalition Twitter account highlighted the role of its partners in eastern Syria. Officials with the SDF warned that a Turkish operation would lead to a major conflict.

Ankara said that it wants to do in eastern Syria what it carried out in Afrin, Jarabulus and Al-Bab. These are the three areas that Turkey occupies in northern Syria from which it launched operations in 2016 and 2018. Ankara told Turkish media on August 4 that it had informed Moscow and Washington about its upcoming operation into areas in eastern Syria. This would allegedly mean Turkish armor and air forces could attack the SDF, which is partnered with the United States. How that would work, considering that the coalition controls the air space in eastern Syria, was unclear. Russia has frequently slammed the United States for occupying eastern Syria, alleging that Washington trades oil and trains terrorists. Turkey’s improving relations with Russia over the S-400 deal and Ankara’s claim it informed Ankara come in this context.

On August 7, the U.S. Embassy in Syria announced that a compromise had been hammered out. A “rapid implementation” of the agreement would address Turkey’s concerns. An operations center in Turkey would be made to coordinate the safe zone. The safe zone would become a “peace corridor” and every effort would be made “so that displaced Syrians can return to their country.” Of interest in the statement was the claim that it would be done rapidly and that the United States had adopted Ankara’s language of a “peace corridor.”

The third aspect of the U.S.-Turkey agreement was the assertion that Syrian refugees, many of them Sunni Arabs from other parts of Syria, would return to eastern Syria. In the past, Turkey has tried to return Syrian refugees to other parts of Syria. Reports in March 2018 noted that Turkish officials said they could not host 3.5 million Syrians forever. Turkey’s TRT Turk said in March that 330,000 refugees had returned to Syria, some of them to Afrin. But these are not areas they were necessarily from. This raises concerns, particularly among Kurds, that the larger objective of a “peace corridor” would be demographic change, not just in Afrin but along the border area. Reports that Turkey envisions sending seven hundred thousand Syrians into the area of the peace corridor appear to confirm these concerns that Ankara’s plans are multilayered. Ankara wants to defeat the SDF on the border, create tensions between the United States and its SDF partners, compel Washington into a deal over the S-400 by using Syria as leverage, and repatriate almost a million Syrians to reduce pressure on Turkey’s economy. If Ankara only meets two of these objectives, then the recent crises over eastern Syria would be successful.

Ankara’s claims that eastern Syria would be returned to its “true owners,” a term that has been used before regarding Afrin, leads to questions about the message sent by assertions that those living in eastern Syria today are not the “true owners.” The United States, however, has no interest in becoming an arbiter of a land registry in eastern Syria; the coalition has focused primarily on security issues and the drawdown of forces after December that would reduce the number of contractors, diplomats and the semblance of investment in civil affairs. The latest Department of Defense Inspector General report made that clear as well.

This leaves a constant cloud of crises hanging over eastern Syria. On the one hand there are the estimated fifteen thousand ISIS fighters in Syria and Iraq and the presence of ISIS sleeper cells. Also, there is the difficulty of securing former ISIS members in detention facilities and at Al-Hol camp. While the United States wants the SDF to focus on stabilization and security, inevitably the SDF is concerned about Ankara’s threats and what a safe zone will mean. Can the SDF be asked to abandon areas along the border that it sacrificed heavily for in 2014 and 2015 in the battle with ISIS in places like Kobani? The U.S. experience in other places, whether Iraq, Somalia, Libya Afghanistan, or training Palestinian security forces, shows that the United States has done a poor job of nation-building and acting as an arbiter between competing national groups. The approach to fighting ISIS has shown that current U.S. policy is primarily about working by, with and through local forces who help pinpoint and neutralize members of groups like ISIS. This policy is not focused on changing political systems and administering territory.