In Baghdad, Pro-Iran Militias are Trying to “Stop the Steal” 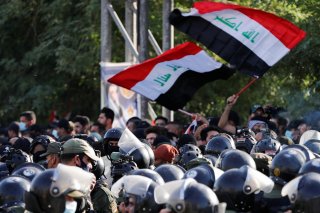 Hundreds of members of the Popular Mobilization Forces (PMF), an umbrella group of Iraqi Shi’a militias, rallied against what they viewed as “fraud” in Iraq’s most recent election, which took place on October 10.

That election resulted in a resounding defeat for the militia units’ political wing, the Fatah (Conquest) Alliance, which was able to gain only around seventeen seats, down from forty-eight. The election’s most successful party, Shi’a cleric Muqtada al-Sadr’s movement, won more than seventy. A third Shi’a party, the State of Law Coalition led by controversial former Prime Minister Nouri al-Maliki, placed third, with around thirty-four seats.

If the result is finalized, the PMF would still maintain substantial influence in the government, largely through exerting pressure on independent parliamentarians. However, perhaps inspired by similar events elsewhere, the militias have refused to accept the results and claimed that they were the result of voter fraud. On Tuesday, they gathered for a protest outside Baghdad’s Green Zone, a heavily protected area that houses much of the Iraqi government and various foreign diplomatic missions.

The groups demanded that Iraq’s national election commission conduct a recount of the votes. They also denounced the United Nations, which had monitored the election and worked to prevent irregularities. The final turnout was around forty-three percent—low compared to previous elections, a result of many Iraqis boycotting the proceedings altogether.

Earlier protests over the weekend included a demonstration on Sunday, where roads in the outskirts of Baghdad were blocked by militiamen. PMF representatives have suggested that the elections were rigged as a pretext to dissolve the militias. Accusations of foreign powers, most prominently Washington, altering the results were also widespread.

The Iraqi government of Prime Minister Mustafa al-Kadhimi has had a complicated and nuanced relationship with the militias. Although al-Kadhimi has praised them for their decisive role in the war against ISIS, the government has also taken steps to press for their increasing integration into Iraq’s security forces - a goal that the PMF has resisted, attempting to maintain autonomy from the government in Baghdad.

The units are also controversial in Iraq because of their open loyalty to Iran, which armed, trained, and funded them during the war against ISIS. In January 2020, the leader of the PMF, Abu Mahdi al-Muhandis, was killed alongside Iranian Quds Force General Qassem Soleimani by a U.S. drone strike at the Baghdad airport.

The process of selecting Iraq’s next prime minister will likely be resolved through private negotiations between the parties, as no party or faction will have a majority of the country’s 329 parliamentary seats.