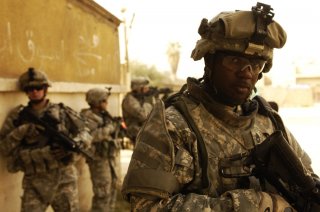 We need to be clear that the U.S. military presence in the Middle East is being reduced, but not to zero. When the word “withdrawal” is used to describe this process, as it frequently is, that is an exaggeration. The core of the American military presence established in the region after the Gulf War of 1990-1991 is the basing system established in the smaller monarchies of the Persian Gulf. Those bases and facilities are still operating. Some of the equipment stored in some of those bases is being transferred to Jordan, but that is hardly a sign of withdrawal from the region.

After the 9/11 attacks, the U.S. military presence in the region vastly increased with the invasions of Afghanistan and Iraq. If one takes as a baseline for comparison the late 2000s, when the American military presence in both of those places was at its height, it might look like the United States is leaving the area completely. However, that is the wrong baseline to use given America’s extraordinary and unwise commitment following the shock of 9/11. We can secure our interests in the Persian Gulf region with the kind of military presence we had in the 1990s.

Afghanistan was always tangential to the long-term American interest in the Persian Gulf. After a twenty-year military commitment to that country that started as a counter-terrorism operation but quickly morphed into an ultimately failed nation-building exercise, it was time for the United States to leave. The Biden administration’s decision on Iraq is not comparable to what is truly a withdrawal from Afghanistan. For reasons having to do with Iraqi domestic politics and a desire to support Prime Minister Mustafa al-Kadhimi, the United States will no longer have “combat troops” in Iraq. However, the actual American military presence in Iraq is not changing. It remains in Iraq, with the support of the Iraqi government, to train with and support the Iraqi armed forces. It provides the United States with some leverage in the country and is visible support for Iraqi leaders who are trying to walk the fine line of limiting Iranian influence in their country.

As of now, there is no indication that the Biden administration wants to withdraw completely from Iraq, nor is there any indication that it intends to change substantially the basing structure in the smaller Gulf monarchies. Maintaining this current configuration is a prudent approach in an area that remains both very important to the world economy and volatile. The Iranian attack on the Saudi Arabian oil facility in Abqaiq in September 2019 is the most significant recent example of how regional states are still willing to use military force to disrupt rivals’ oil production and export. The American military presence in the Persian Gulf provides a potential deterrent to similar actions and a basis for response when those actions occur in the future.

F. Gregory Gause, III, is the John H. Lindsey ’44 Chair and Department Head in the Department of International Affairs at the Bush School of Government and Public Service, Texas A&M University.