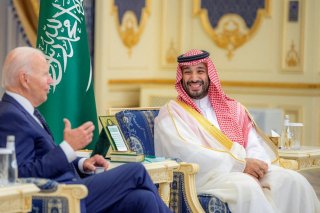 President Joe Biden’s recent trip to Israel, the Occupied Palestinian Territories (OPT), and Saudi Arabia was the culmination of a full reversion to the U.S. foreign policy status quo. Indeed, the meetings, rhetoric, and coddling of the world’s worst dictators and an apartheid state—without verifiable, sustainable benefits to U.S. national interests or improvements on human rights and respect for international law—reflect a low point for the current administration. While hardly surprising, such decisions suggest the current administration believes it can kick persistent and growing issues down the road—a catastrophic mistake administrations have made for decades.

Beginning in Israel, Biden met with Prime Minister Yair Lapid and Alternate Prime Minister Naftali Bennet on July 13 to discuss regional issues, including the Joint Comprehensive Plan of Action (JCPOA) nuclear negotiations with Iran, the Abraham Accords, and wider regional security cooperation. The issue of a Palestinian state was noticeably mentioned as an afterthought in public speeches during the two-day trip to Israel—reflective of the Biden administration’s lack of focus on the issue.

In fact, Biden’s decision to only mention Palestine in passing and visit the OPT for less than three hours suggests that the status of U.S.-Palestinian relations remains frosty at best. Slightly conflicting statements at the joint conference between Biden and Palestinian Authority (PA) president Mahmoud Abbas further highlight this point. Biden’s announcement of increased aid for the OPT, while certainly appreciated by Palestinians and anyone following humanitarian conditions on the ground, fails to make up for the unbalanced U.S. approach to Israeli-Palestinian relations that was reflected in Biden’s reiteration that Jerusalem is the capital of Israel.

Worse, such pronouncements allow Washington to excuse itself once again from addressing—or even acknowledging—the root causes of the humanitarian and geopolitical issues under this file. Israel’s apartheid policies and direct support for ethnic cleansing create the humanitarian and human rights nightmare most Palestinians currently face, as documented by nearly every major human rights organization focused on the issue today. Rather than trying to address this, Biden signed the U.S.-Israel Strategic Partnership Joint Declaration during the visit, making it clear human rights are not a focus.

Rather, Biden and his staff are choosing to apply bandages to a hemorrhaging wound, hoping it will stop bleeding. Yet such unchecked grievances produce the violence the administration hopes to prevent. If the United States seriously stands against groups like Hamas, such policies and declarations do little to curb their influence as an alternative to failed peaceful approaches to engaging Israel, directly contradicting stated U.S. policy objectives. Such objectives are already inherently contradictory, as they call for a two-state solution while mindlessly and recklessly supporting Tel Aviv as it murders innocent Palestinian children and U.S. citizens with a blank check from the U.S. government.

This says nothing of wider regional developments discussed during the trip, specifically related to Iran and Arab normalization with Israel, which reflect additional U.S. policy contradictions. Talk of a regional security pact through the Middle East Air Defense Alliance (MEAD) raises concerns in this regard, as it is designed to operate as a unifying deterrent—as if Israeli nuclear weapons fail to do this already—against Iran and its regional proxies. Of course, the Gulf has assured the world that regional cooperation does not equate to a security pact against Tehran.

Regardless of the Gulf’s public and likely false pronouncements, Iranian perceptions of such security cooperation and the excuses it can and is making in defense of its existence only serve to disrupt a trend of growing regional dialogue. This was worsened by Biden’s time in Israel, during which he threatened to use force to prevent Tehran’s development of nuclear weapons. Additionally, his two-day trip to Riyadh to meet with the Gulf Cooperation Council (GCC) and Egypt, Jordan, and Iraq (GCC+3), during which he said the United States “will not walk away” from the Middle East, further casts a shadow over the situation.

Ultimately, Tehran correctly views the Abraham Accords and the potential MEAD alliance as a growing anti-Iran axis designed to either force regime change through war or counter its ability to project influence beyond its borders through methods many of its neighbors already use. Of course, such a bloc is hypocritical, weakening its legitimacy from the start. It is not difficult for the Iranians to point to Saudi and Emirati airstrikes in Yemen, Israeli airstrikes in Syria and Gaza, or Turkish military offensives into Syria and Iraq while arguing foul play and correctly criticizing different standards across the region, which depend on diplomatic closeness to the United States for legitimacy. Iran will certainly use such rhetoric to justify counteractions, destabilizing the region further.

This is not to justify Iran’s malign actions across the region or domestically. Rather, it is to argue that consistency in policy produces fewer excuses for states to point out hypocrisy and use it to justify additional violence. Washington regularly forgets this core component as often as it forgets what actual realism means—the use of thoughtful, consistent, and sustainable policy to advance state interests. On this issue, Biden’s visit to Saudi Arabia on the final leg of his trip offers another case in point.

Biden opted to give Saudi crown prince Mohammed bin Salman (MBS) knuckles when he arrived in Riyadh on Friday, coddling the de facto leader of Saudi Arabia into increasing oil production and taking additional steps to normalize with Israel. Such incidents are a far cry from the “pariah” comments Biden used to gain the progressive vote in the 2020 election. They reflect an embarrassing moment for Washington on the international stage following MBS’ support for the killing of Jamal Khashoggi and a litany of other human rights violations, not unlike those of Iran.

Yet U.S. rhetoric always positions Riyadh as a core partner and Iran as an eternal enemy, largely due to Saudi Arabia’s centrality to international energy markets and influence in the Arab world. However, the decision to meet with MBS and other Gulf monarchs of varying and often negligible human rights stature—as well as apparent U.S. security commitments to these states—was hardly an effective realist policy, specifically because it is not sustainable.

Such relationships are transactional in nature and ignore the inherent legitimacy problem autocratic rulers carry. These states do not share America’s human rights values and often take more than they give from their security patrons. Support for such states is a direct contributor to violent extremism across the region, as the U.S. is implicated in many of these states’ human rights violations. Saudi Arabia is the pinnacle of autocracy in an autocratic region, contributing to destabilizing, undemocratic, and counterrevolutionary policies that are equally as problematic as Iranian actions across the region.

Ultimately, blind support for these states does not serve U.S. interests and heightens the risk of conflict with Iran or between Israelis and Palestinians. To be sure, U.S. engagement with these states should occur, but only on an equal and consistent footing that legitimizes and supports regional dialogue and stability. The objective should be to create a balance that permits the United States to back away from the region militarily, not devise military alliances that divide the region and offer blank-check support to human rights abusers.