Biden Has Only Bad Options in Afghanistan 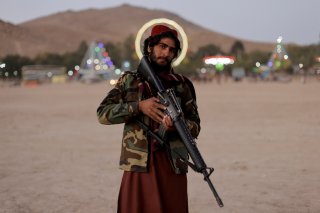 When President Joe Biden entered office, he was faced with a choice between ending the doomed war in Afghanistan or kicking the can down the road for another administration to deal with. Biden, to his credit, displayed admirable courage in bearing the political costs and seeing an overdue withdrawal through. Biden isn’t the “man who lost Afghanistan” that many have been eager to make him out to be, but he will be responsible for how U.S. policies affect Afghanistan today.

Without troops in Afghanistan for the first time in twenty years, the United States has relied on “economic tools” to influence the Taliban. The Biden administration froze $7 billion in Afghan foreign reserves immediately after the withdrawal, causing a liquidity crisis and leaving the Afghan central bank unable to perform its basic functions. The crippling of Afghanistan's banking system, coupled with the Taliban’s misrule and the rapid suspension of the aid that once made up 75 percent of all government spending, led to what a United Nations official could only describe as a “pure catastrophe.” As the Afghan economy collapsed, Washington turned to broad sanctions exemptions and emergency humanitarian aid in hopes of staving off disaster. Nevertheless, foreign companies and financial institutions remain hesitant to do business in Afghanistan, and no amount of aid can make up for an isolated banking system without access to currency. Cut off from the world, the Afghan economy contracted by as much as 40 percent in the past year, with nearly half of the population now facing acute malnutrition.

The U.S. pressure campaign, which is often justified in the name of human rights, has amounted to a policy of collective punishment. Yet despite their devastating impact, these measures have done nothing to moderate the Taliban’s rule, which has only grown more repressive over time. As U.S. officials admit, the Taliban, a group that fought for decades to impose its theocratic vision, has proven “unwilling to bow to foreign pressure on issues of ideological importance.” Continued economic pain is unlikely to change this, but the United States can do much to alleviate the humanitarian crisis it has helped exacerbate.

In a positive sign, it was reported in late July that U.S. and Taliban officials had exchanged proposals for a mechanism to release half of the frozen reserves. Just last week, however, the Biden administration ruled out such a plan for the foreseeable future, pointing to the discovery of Al Qaeda leader Ayman al-Zawahiri in Kabul. The Zawahiri affair will undoubtedly make it more difficult to pursue any agreements with the Taliban, but cautious diplomacy on this key issue should continue. Without a functioning central bank, Afghanistan will have little hope of developing a more self-sustaining economy and moving away from aid dependency, imperiling the country’s long-term stability and worsening the suffering of the Afghan people. Recognizing this reality, as well as the security risks posed by Afghanistan becoming a failed state or plunging into renewed civil war, the Biden administration should recommit to stabilizing the Afghan banking system, ideally by establishing a third-party trust fund to administer the reserves and working through non-Taliban technocrats. Moreover, Biden must make good on his promises and expedite the resettlement of special immigrant visa applicants.

The Taliban’s firm grip on power and ideological commitment greatly constrain U.S. influence, but the United States must work with the hand it has been dealt. While understandable, the administration’s hesitancy to interact with the Taliban in Afghanistan may hinder whatever modest progress can be made on human rights. Unlike the United States, the European Union has re-established a “minimal presence” in Afghanistan, which it uses to facilitate humanitarian relief, support civil society, and more actively press the Taliban on specific reforms necessary for further dialogue. By joining its European allies in setting up an informal presence in Afghanistan, the United States could support these efforts and also begin to gradually engage with the more moderate and pragmatic Taliban factions currently vying for power. Regardless of what route the Biden administration takes, it would be wise to continue using partners like Qatar as intermediaries. Major progress on human rights will be unlikely, and the administration is clearly concerned about the political risks of appearing “soft” on the Taliban. Nevertheless, Washington has been left with only bad options in Afghanistan.

The paramount U.S. interest in Afghanistan—and indeed, the reason for the invasion twenty years ago—is preventing terrorist attacks on the American homeland. While human rights concerns should not be ignored, U.S. policy in Afghanistan must be centered on reducing the threat of transnational terrorism, a more pressing and realistic objective.

To be sure, the sheltering of Zawahiri by at least some elements of the Taliban underscored the group’s unreliability and reluctance to cut its long-standing ties with Al Qaeda. However, U.S. intelligence has determined that Al Qaeda lacks the “capability to launch attacks against” the United States, with the dozen “core members” who remain in Afghanistan not involved in planning external attacks. Despite remaining intransigent on its relationship with Al Qaeda, the Taliban has a clear incentive to ensure an attack on the United States is not staged from Afghanistan, and U.S. pressure and engagement should aim to reinforce the Taliban’s risk-aversion.

Although the Zawahiri strike was something of a vindication, “over-the-horizon” operations alone will be no panacea. In fact, an overreliance on such operations, and the civilian casualties that would inevitably come with it, could backfire. A return to regular airstrikes against more junior ISIS-K militants, for instance, could fuel support for anti-American attacks, push the Taliban to take a harder line against the United States or support retaliation to prevent nationalist blowback, or lead to a violent power struggle. So far, Biden has correctly resisted the temptation to continue the drone war after the withdrawal.

The United States and the Taliban share a common enemy—and a more serious threat—in ISIS-K, the group responsible for the killing of thirteen U.S. soldiers and a recent string of suicide bombings in Afghanistan. As U.S. special representative for Afghanistan Tom West noted, the Taliban is “sincere in [its] efforts” to contain ISIS-K, which the U.S. military believes may soon be capable of carrying out attacks against the United States. The Taliban is not a trustworthy partner, but the United States may still be able to rely on it to fight ISIS-K. While any counterterrorism assistance may be unrealistic at the moment, the United States should not rule out the future possibility of limited and discreet cooperation with the Taliban to weaken the greater evil of ISIS-K, a proposal that the Pentagon has already entertained.

The Taliban is not the only U.S. adversary that is deeply concerned about terrorism within Afghanistan. With America no longer in the neighborhood, China, Russia, and Iran are all increasingly worried about attacks emanating from Afghanistan. Beijing, for example, has economic interests in Pakistan and fears of extremism spilling over into China, both of which demand a stable Afghanistan. Rather than worrying about the spread of “malign influence” or treating Afghanistan as an arena for great power competition, the United States should let these states shoulder the burden of mitigating regional threats. Terrorism will not be eliminated in Afghanistan, but uncomfortable compromises may be able to make it a manageable problem.

If the twenty-year effort in Afghanistan made anything clear, it is that there are significant limits on America’s ability to shape events in Afghanistan and remake societies. This is even truer today, and the United States must prioritize its narrow interests and the few things it can control in Afghanistan. The Taliban’s takeover was a tragedy, but it is not one that can be wished away.

Will A. Smith is the assistant editor of the National Interest.