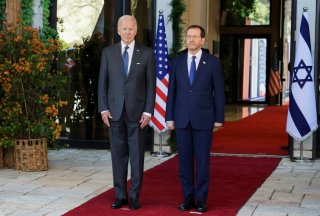 President Joe Biden met with Israeli President Isaac Herzog at the White House on Wednesday, a high-profile meeting between the two leaders amid successful diplomacy between Israel and Lebanon, unrest in Tel Aviv’s regional rival Iran, and concerns of growing anti-Semitic attitudes in the United States.

During a joint press conference on Wednesday afternoon, both presidents emphasized the historical connection between the United States and Israel, widely described as Washington’s closest Middle Eastern ally. Herzog described Biden as a “true friend of Israel,” and Biden noted that he had previously been awarded the Israeli Presidential Medal of Honor during a visit to Israel in July.

“[Presidents Biden and Herzog] discussed the enduring strength of the U.S.-Israel partnership, ways to further deepen cooperation between the two countries, and the United States’ unshakeable commitment to Israel’s security,” the White House readout of the meeting read. “They consulted on a wide range of global and regional issues of mutual concern”—highlighting the role of Iran, which has remained hostile to Israel since 1979 and is now closer to developing a nuclear weapon than at any time in its history. In his remarks during the press conference, Herzog made reference to Mahsa Amini, an Iranian woman whose suspicious death sparked widespread protests inside Iran, including many calling for the overthrow of Iran’s clerical government. Tehran has responded with a harsh police crackdown, which both leaders condemned.

During the meeting, Biden also praised Israel’s successful diplomatic initiatives in recent months, which resulted in the resolution of a longstanding maritime border dispute with Lebanon and the restoration of full diplomatic relations with Turkey. Herzog highlighted Israel’s upcoming participation in the COP27 climate conference in Sharm-el-Sheikh, Egypt, as a further step toward the country’s regional integration.

“Additionally, Biden condemned the persistent scourge of anti-Semitism, including anti-Israel bias in international fora,” the White House statement read. It did not highlight any particular instances of anti-Semitism, but media sources speculated in the run-up to the meeting that the two leaders might discuss recent remarks by former president Donald Trump, who accused American Jews of disloyalty to Israel by supporting Democrats, and controversial rapper Kanye “Ye” West, who threatened violence against “Jewish people” on Twitter. White House press secretary Karine Jean-Pierre condemned both incidents earlier in the week.