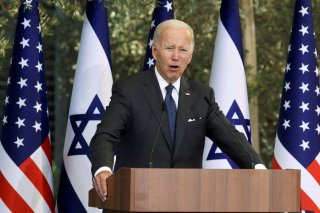 President Joe Biden indicated in an interview aired on Wednesday that his administration had insisted on the continued designation of Iran’s Islamic Revolutionary Guard Corps (IRGC), the military branch responsible for safeguarding its clerical system of government and pursuing its regional aims, as a foreign terrorist organization. Biden said he is willing to maintain the designation even at the expense of a renewed nuclear deal with Iran, a development that comes as Iran is thought to have accrued enough enriched uranium to construct a nuclear weapon.

Biden’s remarks came during an interview that was pre-recorded in Washington, D.C., by Israel’s Channel 12 news station and broadcasted after his arrival in Israel on Wednesday. In the interview, an Israeli reporter asked the president if he was “committed to keep[ing] the IRGC on the ‘foreign terrorist organization’ list, even if that means that it kills the deal.” Biden simply responded: “Yes.”

It is unclear how Biden’s comments will affect the negotiation process between Iran and the United States, which has continued unevenly after the conclusion of talks in Doha, Qatar, in late June. Both Washington and Tehran previously verbally committed to restoring the Joint Comprehensive Plan of Action, or JCPOA, the landmark nuclear accord negotiated between President Barack Obama and Iranian president Hassan Rouhani in 2015, which placed firm limits on Iran’s uranium enrichment capabilities in exchange for international sanctions relief.

From 2015 until 2018, all sides fulfilled their obligations under the JCPOA. However, many Americans remained dissatisfied with the agreement, and Obama’s successor in office, President Donald Trump, unilaterally withdrew the United States from the accord and reimposed sanctions on Tehran in 2018, claiming that doing so would force the Iranian government to concede to harsher restrictions than those in the JCPOA. This strategy, summarized by both its supporters and detractors as a “maximum pressure” campaign, has inflicted economic damage on Iran but has failed to hinder its nuclear program.

Although Biden vowed to restore the JCPOA during his campaign for the presidency, he has continued to impose most Trump-era sanctions, arguing that Iran should first limit its enrichment capabilities as a sign of good faith. At the same time, Iranian diplomats have insisted that the United States should first offer sanctions relief, creating an impasse. The president has also repeatedly claimed that the IRGC’s designation as a terror group—a designation first made by the Trump administration in April 2019—was not on the negotiating table, as it stemmed primarily from Iran’s regional foreign policy rather than its nuclear program. Biden has faced bipartisan pressure from Congress to keep the label in place, potentially creating domestic political problems if he were to lift it.

During the interview, Biden also declared that he was willing to use force against Iran to prevent it from developing a nuclear weapon, but only “if that was the last resort.”