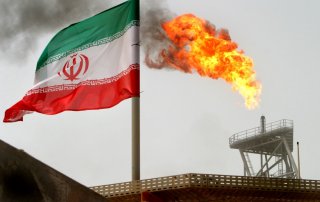 Since Iran’s Islamic Revolution of 1979, the country’s oil and gas sector has continuously suffered from sanctions, mismanagement, and underinvestment—challenges that have steadily chipped away at the country’s former status as a major global oil exporter. Today, the situation has become even worse. Iran’s oil and gas sector continues to face crippling U.S. sanctions as part of the Trump administration’s “maximum pressure” campaign, practically eliminating the country’s ability to export to major customers and cutting off its access to much needed foreign technology, investments, and supply chains. To make matters worse, it also faces a secular drop in commodity prices that has persisted since 2014 as well as the global COVID-19 pandemic, both of which have kept global commodity prices low for at least the next year or so.

Over the longer term, however, a shift in the global energy industry—known as the energy transition—has begun to take shape, where renewables—such as solar and wind power—are, albeit gradually, supplanting coal, oil, and even natural gas in the global energy mix. The energy transition threatens to render untapped oil resources economically unfeasible to produce, leaving them as “stranded assets.”

With this backdrop, Iran faces a triple challenge of chronic low demand for its exports, an inability to build and invest for the future, and a global shift away from hydrocarbons, setting the country on course to lose out on billions in potential revenues. This begs the question: as the Islamic Republic continues to fall behind in the rapidly evolving global energy industry, will it ever be able to take advantage of what remains of its enormous oil and gas wealth?​

Iran’s natural resource wealth should make it one of the wealthiest countries in the world. It possesses the fourth-largest reserves of oil and second-largest reserves of natural gas globally. While many of its fields have been in production for almost a hundred years, new reservoirs continue to be discovered. According to a report by Wood Mackenzie, in 2019 the National Iranian Oil Company was first in the world in new oil and gas discoveries in Iran. Indeed, before new sanctions were imposed in 2018, the production and export of oil and oil products created over $50 billion of annual revenues, providing roughly 30 percent of the government’s budget and accounting for around 13 percent of the country’s GDP.

Sanctions, however, have drastically reduced Iran’s oil exports. Many of its most important customers—including Japan, South Korea, and even China—have stopped buying oil from the country in fear of becoming the targets of U.S. sanctions. A recent report painted a particularly dim picture, indicating that Iranian oil exports fell to around 100,000 barrels per day in July, a drastic 96 percent decline from the 2.5 million barrels per day that the country exported before the United States withdrew from the Joint Comprehensive Plan of Action (JCPOA) and reintroduced sanctions on Iran’s oil and gas, petrochemicals, shipping, and banking sectors in 2018.

The associated decline in revenues has greatly impacted the government’s finances. A chronic budget deficit has even forced the Iranian government to issue oil bonds to citizens to try to close a large government budget deficit. Tehran has tried to bypass sanctions and keep exports flowing by smuggling cargos to countries like Venezuela and China. But the measly revenues that come from these sales have hardly helped the government or the struggling oil sector.

Decreased revenues have not only hurt the government’s coffers but have also directly impacted the oil and gas sector’s operations. A recent report noted that sanctions and financial challenges have forced the shut-down an estimated 25 percent of all Iranian rigs. Some refineries and petrochemical plants have also been unable to pay their workers, stoking protests and work stoppages at several facilities. In early August, a wave of labor strikes broke out across Iran’s oil-rich southwest at various facilities, including the Abadan refinery—the world’s largest. Contract workers, along with some of their full-time employed colleagues, protested low salaries, overdue wages, and terrible working conditions in the extreme summer heat.

Beyond impacting operations, sanctions have also cut off much-needed foreign investment, technology, and access to global supply chains. Global energy companies like France’s Total, China’s National Petroleum Corporation (CNPC), and Russia’s Rosneft have all pulled out of major joint ventures with the National Iranian Oil Company to develop Iran’s oil and gas resources. In 2018, Total withdrew from a $4.8 billion project to develop phase 11 of Iran’s massive South Pars gas field—where three-quarters of the country’s natural gas is produced—fearing that the United States could target the company’s significant investments in U.S jurisdiction. Shortly thereafter, Rosneft and CNPC, facing the same fears, followed suit and abandoned the project. The departure of these firms from Iran meant that the country would be unable to access the advanced, proprietary technology and know-how required to effectively develop these fields.

Tehran has tried to mitigate these challenges. As part of the Islamic Republic regime’s “resistance economy,” the government has promoted localization of technology, equipment, and services in an attempt to reduce its dependence on the global oil and gas parts and equipment supply chain. After the United States re-imposed sanctions in 2018, for example, Iran’s oil minister, Bijan Zanganeh, announced that the country would move forward and develop the sector without foreign investors and partners, instead leveraging local companies, universities, and R&D to develop the country’s resources. But despite these efforts, without access to global investment and advanced technology, localization will only get Iran’s oil and gas sector so far.

Iran’s failed attempts to export liquefied natural gas (LNG) illustrates this well. LNG allows countries to access global markets by shipping natural gas—through a cooling process that converts the gas into a liquid—by sea, thereby expanding the potential markets and customer bases that a country can reach beyond the more geographically-limited option of transporting it by pipeline. But LNG is an expensive and technologically advanced process, requiring infrastructure and know-how, in most cases limited to a few international companies. When companies like Total left Iran in 2018, they took with them any chance Iran had to develop domestic LNG capabilities. Iran lacks domestic technologies or know-how to develop liquefaction plants or provide specialized catalysts necessary to develop LNG infrastructure.

Iran is therefore stuck with exporting what remains of its gas after domestic consumption through pipelines to smaller regional markets like Iraq, Turkey, and Armenia, all while gas-producing countries like Qatar, Russia, and the United States continue to bring new LNG capacity online, taking a share of the already-saturated global LNG market.

A Transition is Coming

As Iran’s oil and gas sector contends with these challenges, a global shift away from fossil fuels takes shape. This shift, known as the energy transition, entails a global reduction in fossil fuels—particularly oil and coal—towards transition fuels—like ethanol and natural gas—and ultimately renewables like solar and wind power. Along with other factors, the energy transition has sparked fears in oil-producing countries of “peak oil demand,” where some estimates see demand for fossil fuels reaching a peak in the next few years. Major international oil companies have begun to shift their investment strategies to adapt—including BP which recently announced that it would slash oil production by 40 percent and invest billions in renewable energy, joining the ranks of companies like Total and Shell.

As the energy transition gradually reduces demand for fossil fuels, it could drastically reduce the value of reserves for major oil producers like Iran, leaving behind existing reservoirs, infrastructure, and other investments as stranded assets. Iran is therefore in a race against time to exploit what remains of its oil and gas wealth, though the outlook seems dim.

A return to the JCPOA—which could happen with a Joe Biden presidency—could offer some relief to sanctions and reopen Iran’s oil and gas sector to international companies. Major international players—particularly the Chinese—are keen to return to Iran and invest in the country’s energy sector. But regardless of who is elected as U.S. president in November, as long as Iran maintains an aggressive foreign policy and disregards international norms, international investors will continue to look on with skepticism, hesitant to invest in a country where international sanctions could be reintroduced at any time.

Omid Shokri Kalehsar is a Washington-based Senior Energy Security Analyst, currently serving as a Visiting Research Scholar in the Schar School of Policy and Government at George Mason University, as well as an analyst with Gulf State Analytics (GSA), a geopolitical risk consultancy based in Washington D.C. Omid is a Ph.D. Candidate in International Relations at Yalova University.

Brett Sudetic is an advisor with Gulf State Analytics (GSA) focused on Iran-GCC relations, Gulf political economy, and regional security affairs. As a management consultant, he has advised government organizations and state-owned enterprises in the region.