Can ISIS Make a Comeback? 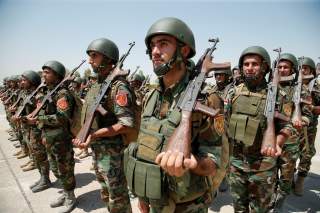 A trip to Qarachogh illustrates the challenges. Colonel Srud Barzanji, a Peshmerga commander, points out the areas on his frontline, which stretches for 150 km along the mountains and hills around the town of Makhmour, overlooking the Nineveh plains. There are 14,000 Peshmerga on this line in nine brigades. Across from them is the Iraqi 14th infantry division and an assortment of PMU units. This should be enough to keep ISIS down, but the Kurdish officer says ISIS is increasing. He’s been on this frontline for years and knows the land. He points out that a recent operation with the coalition and Iraqi forces was successful and an airstrike killed fourteen ISIS members. In general, however, there is little cooperation with the Iraqi forces, as many Kurdish forces believe the Iraqi forces are infiltrated with pro-Iranian and sectarian Shiite elements. They say that this means the local Sunni Arabs will continue to be alienated and join extremist groups.

“ISIS penetrates areas between Peshmerga and Iraqi army, after the 2017 October events ISIS has infiltrated these places, but thankfully the political situation is better between Erbil and Baghdad so the situation between the militaries is also better,” says Colonel Barzanji. He says the Iraqi forces are undermanned and only control security points, not the whole sector. “ISIS is infiltrating these Sunni areas and they have a bad relationship with Hashd al-Shaabi [PMU].” The Peshmerga say they need more support from the international community to aid in defeating ISIS here. That includes basic equipment like body armor. It should also include UAVs, they say, so they can conduct surveillance. Peshmerga weapons are also a hodge-podge, including different calibers and systems from different eras.

The SFAB that operates with the Peshmerga is seeking to leverage its small footprint to assist them in keeping the area secure. That means the United States on both sides of the line is trying to enable these units to defeat the ISIS members who are infiltrating areas between Iraqi and Peshmerga forces. On September 18, when I drove up to Qarachogh mountain, we watched and waited until an alleged ISIS cell appeared at a dry wadi, or valley, below the mountain. The Peshmerga said the same ISIS members come daily to collect water and then hide in the caves. Iraqi forces were too far away to take a sniper shot and there were no UAVs or other units present to attack them. This is evidence that the frontline units need basic equipment like sniper rifles, night vision optics, and surveillance equipment. Barzanji predicts that during the rainy season or winter ISIS activity will increase.

Neuenschwander asserts that shared interests will result in the continued defeat of ISIS. However, the gap between Iraqi forces and the Peshmerga is still clear. The coalition’s Kurdistan Coordination Center is still training Peshmerga, to the tune of around fourteen hundred at a time. There are around two hundred trainers in the KRG and six hundred in the rest of Iraq. ISIS’ presence has been almost totally eliminated from the KRG with no recorded attacks in recent memory. In the rest of Iraq, the battle against ISIS continues daily with raids and operations and attacks by ISIS. The coalition hopes it can assist in removing the terror organization’s last safe havens, but that will also require joint operations or additional cooperation between Iraqi security forces and the Peshmerga.

Hurdles remain to attain closer cooperation. The KRG’s Ministry of Peshmerga says Baghdad needs to come to an agreement with the Kurdistan region on the payment of salaries. It also emphasizes the need for the coalition to provide more support and equipment for the Peshmerga. Again, basic things are lacking here, such as proper barracks for the forces, and salaries and budget are necessary to fill these gaps. In addition, there is widespread concern about the increasing role of the PMU and sectarian militias. The sidelining of the widely respected Counter Terror Service (CTS) commander Lt. Gen. Abdul-Wahab al-Saadi on September 28 led to more concerns that all is not progressing as it should in Baghdad. The CTS was key to defeating ISIS, if his sidelining means an increased role for the PMU in the security forces, it may not bode well.

Neither the coalition nor the Peshmerga work with the PMU, but the Iraqi forces do. The PMU are paid salaries from Baghdad and are now an officially recognized force, yet some of their elements and commanders have been sanctioned by the United States. This presents a challenge because the PMU is often openly hostile to the United States and also to Kurdish forces. Nevertheless, like everything else in Iraq, it is not black and white. The PMU have a base just a hundred meters from the coalition forces near Mosul. When the coalition drives around, it coordinates with the local commanders and a police or Iraqi army escort is provided. There are PMU checkpoints around Nineveh and to the west of Mosul. In some cases the PMU and Iraqi army man the same checkpoints. A liaison enables the coalition to cross these checkpoints with ease, but there have been cases in the past where the PMU sought to stop coalition forces.

Iraq says that ISIS is not safe. “Our hands can reach out whether you are in caves or tunnels, mountains or deserts,” say leaflets recently dropped over suspected ISIS cells. Coordinating those hands, paying them salaries, and providing them the right intelligence, is key to helping them reach those locations.