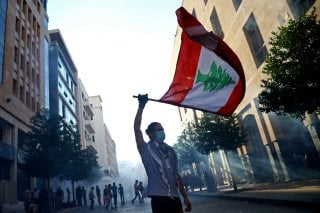 In a press conference held in Beirut’s historic Sodeco neighborhood on September 3, the members of parliament (MPs) who make up the “Change” bloc in Lebanon's parliament announced their agenda to elect a new head of state. They agreed that any individual running for president must meet a list of standards in order to earn their vote of confidence. The thirteen lawmakers, who were elected on the values of Lebanon’s 2019 revolution, said “popular pressure methods” will be applied if a new president is not elected before October 20.

Lawmakers Melhem Khalaf and Michel Douaihy led the conference as they read aloud the group’s requirements for anyone wanting to become Lebanon’s new president. These demands included “maintaining Lebanon’s independence and sovereignty, both internally and externally. It’s unity and the safety of its territories, and to be independent of regional axes and international polarizations on one hand, but capable of getting back Lebanon’s external role.”

The group has thus far declined to make any endorsements. However, one of the lawmakers mentioned to me minutes prior that all thirteen would agree on a single candidate.

Their emphasis focuses on electing an individual who is “a believer in a citizenship state that is non-confessional.” Furthermore, the candidate must “take the side of the majority of the Lebanese people.” The Change MPs’ demands also included the resumption of the investigation into the cause of the August 2020 Beirut port blast, which was suspended months ago due to senior politicians demanding the removal of Judge Tarek Bitar, the current investigative prosecutor. Bitar drew criticism when he called on Ghazi Zeiter and Ali Hassan Khalil, powerful former ministers from the Shia Amal party, to be questioned on their knowledge of the blast.

Zeiter and Khalil refused and demanded that Bitar be recused from the investigation, putting the investigation on pause. Those still calling for accountability, including the thirteen Change lawmakers, want the new president to ensure that the port blast file is reopened. They have put up a deadline for their demands and publicly said they are preparing to demonstrate their resolve in the face of a well-entrenched and corrupt system.

Others from establishment parties like the Lebanese Forces (LF) have also demanded the truth about the port blast’s origins. During a speech honoring the “martyrs” of Lebanese Forces during the civil war, LF leader Samir Geagea said that Lebanon needs a strong president with the will to confront corruption. The problem is that neither Geagea nor the new MPs who oppose the ruling class have decided on which candidate has the courage to rise to the occasion.

The deadline to decide is on October 20, only ten days before President Michel Aoun’s term in office legally expires. Between now and then, the group of independent MPs will hold a series of “consultative meetings'' with citizens and political leaders, as well as segments of the Lebanese diaspora. This will be crucial for the Change lawmakers to reach out to Lebanese citizens living abroad. The May elections saw a surge in voter registrations for Lebanese residing outside of their country. Though the numbers vary, the accepted number of Lebanese ex-pats legally eligible to vote was over 220,000, with 60 percent turning out to cast their ballots, according to the Foreign Ministry of Lebanon. Despite the majority of outside votes going to traditional parties, the reformists understand they still need to make an effort to reach out to Lebanon’s large community living abroad. The majority of Lebanese want change. However, they are extremely pessimistic and have serious doubts about how far this new bloc can go in challenging the sectarian establishment.

The thirteen Change MPs and anyone fighting for the survival of Lebanon will face a tiresome battle. Nevertheless, their words must match their actions. Taqqadom lawmakers Mark Daou and Najat Saliba, both former American University of Beirut professors, spoke to me about the nature of their struggle to push the types of reforms needed to rescue Lebanon. After the conference in Sodeco’s Beit Beirut museum, Daou noted the possibility of political paralysis in the selection of the president similar to what was experienced in 2016 before the election of Michel Aoun. However, Daou and Saliba are not letting this sway them from insisting on a president who shares their values, especially on the principle of guaranteeing the new president has the support of most Lebanese. During a meeting, Saliba referred to politics as a service and said she does not wish to sacrifice the people’s trust. She also wholeheartedly endorsed term limits for MPs, which would require a vote in parliament and is unlikely to take place any time soon.

Saliba was criticized shortly after being elected for making perceived positive comments about Speaker of the Parliament Nabih Berri, a man widely accused of being a major pillar of corruption, referring to him as a “school” to benefit from. Many Lebanese were outraged by her remarks and believed their votes had been squandered on her election. Not long after, Saliba clarified her comments by saying she and her colleague Daou must learn what Berri knows from his years of experience in politics. Saliba told me she made an error in her choice of words and did not mean to imply praise for the speaker.

There is a genuine desire for change on the part of the new MPs. That t is a good start, considering that most established politicians have used their influence for corrupt and selfish gains. Yet without a concrete action plan to unseat and expose those who have dragged Lebanon to its current situation, which must include addressing the problem of Hezbollah’s paramilitary wing, no lasting progress will be made. The new MPs must not allow themselves to simply become a cosmetic show of change in a cesspool that has no stomach for true reform. For now, Lebanon must wait to see if proclamations will turn into action.

Adnan Nasser is an independent Middle East analyst with a BA in International Relations from Florida International University. Follow him on Twitter @Adnansoutlook29 and on Instagram @revolutionarylebanon.