Can Pompeo’s New EU Envoy Get Europe To Confront China, Iran, and Coronavirus? 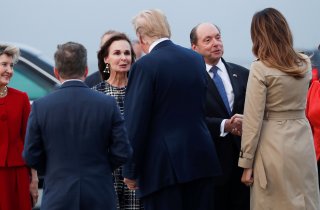 Pompeo filled a position that has been vacant since the February 2020 departure of Amb. Gordon Sondland, who played a central role in President Donald Trump’s impeachment trial. Gidwitz is stepping into the role as the United States seeks to smooth over tensions with the European Union for an era of increased great-power competition.

Gidwitz will continue to simultaneously serve as U.S. Ambassador to Belgium. Brussels, the capital of Belgium, is also home to the European Union headquarters.

“Ambassador Gidwitz will advance a strong U.S.-EU partnership, especially in achieving a speedy recovery from the COVID-19 [the coronavirus] pandemic, while promoting our shared interests and values across the globe,” Pompeo said in a statement.

U.S. delegates were conspicuously absent from an EU-led international counter-coronavirus conference on Monday for reasons the Trump administration refused to explain.

EU officials have thrown cold water on a U.S. proposal to restore a United Nations embargo on Iran, and have harshly criticized the Trump administration’s policy of maximum pressure against the Iranian economy.

However, the accelerating rise of China could allow the United States to bring Europe on board with a push to oppose Beijing’s influence.

EU foreign minister Josep Borrell said that China is a “systemic rival” in an interview published Sunday, even as he criticized Trump’s vision of a zero-sum competition.

Gidwitz has been stationed in Brussels, the capital of the European Union, ever since Trump appointed him and Congress confirmed him as U.S. ambassador to Belgium in 2018. He had previously served as Trump’s campaign finance chair in Illinois.

Mark W. Libby, the charge d'affaires of the U.S. mission to the European Union, filled the role of the highest U.S. representative to the union before Monday’s announcement.

He was soon dragged into the controversy swirling around Trump’s conversations with Ukrainian president Volodymyr Zelensky, and Sondland’s testimony to Congress was used by both Trump opponents and Trump supporters during the president’s impeachment trial.

Trump dismissed Sondland in February, days after the president was acquitted, for reasons the White House declined to comment on.

“I am grateful to President Trump for having given me the opportunity to serve, to Secretary Pompeo for his consistent support and to the exceptional and dedicated professionals at the U.S. Mission to the European Union,” Sondland said at the time.