Can Trump Get America Out of Afghanistan? 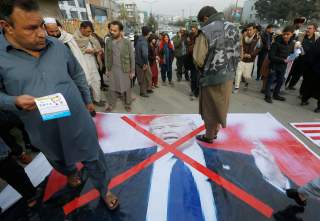 Last week the White House ordered its top diplomats to seek direct negotiations with the Taliban, the latest foreign relations about-face from an administration that seems to be specializing in them. After early escalation and record-setting bombs, President Trump is looking for a way out of Afghanistan. The Taliban is far from defeated, but negotiations may offer America a means to ending our participation in an intractable war in an irrelevant country.

Earlier this month, during a surprise trip to Kabul, Secretary of State Mike Pompeo made the claim that the Taliban “cannot wait us out.” Evidence suggests otherwise.

The Taliban are not losing on the battlefield. Though American troop levels are up 25 percent since 2016 and we are dropping more bombs in the country than at any time since 2013, the war remains in a stalemate. The Special Inspector General for Afghanistan Reconstruction (SIGAR) recently concluded that 43 percent of Afghanistan’s districts are under Taliban control or “contested,” a number unchanged since November 2016. Even that assessment may be optimistic: the Long War Journal thinks that 49 percent of Afghanistan’s districts are contested, and another 9.5 percent are under Taliban control. Afghan opium poppy cultivation set a record in 2017, and may do so again this year.

Kabul is under constant attack. When Gen. Rashid Dostum—Afghanistan’s First Vice President—returned home on Sunday, a suicide bomber killed twenty people, nine of whom were part of Dostum’s security detail. The vaunted “ring of steel” around the capital is ineffective, with regular bombings and attacks in Kabul by the Taliban, Haqqani Network and ISIS-K (Islamic State—Khorasan Province). Afghan government troops cannot even secure the two-mile road from the airport to the U.S. embassy.

The current U.S. commander in Afghanistan, Lt. Gen. Austin Miller, is the seventeenth man to hold that job. His more celebrated predecessors have nearly all retired, yet the war is in no better shape than when they led it. U.S. officers have dutifully recycled paeans to the growing readiness and proficiency of Afghan troops—but the security situation from Kabul to Kandahar makes this praise ring hollow.

The heavily-hyped deployment of the first U.S. Army Security Force Assistance Brigade (SFAB) does not appear to have moved the needle much. The vetting of their partnered Afghan forces slowed the brigade’s operations initially. Despite these onerous force protection requirements, designed to prevent insider attacks, the 1st SFAB’s Cpl. Joseph Maciel was killed by a disaffected Afghan soldier on July 7, 2018.

President Trump approved a modest surge of forces in Afghanistan towards the end of 2017, reversing a campaign pledge to pull U.S. troops out of the country. He now seems to have buyer’s remorse, and has asked for the umpteenth strategy review of the war. The president has had harsh words for Pakistan, the Taliban’s patron and sanctuary. There has been no evidence that the Pakistanis have changed their position, however. Pakistan is likely to be even more solicitous of the Taliban if cricketer-turned-politician Imran Khan and his Pakistan Tehreek-e-Insaf (PTI) Party win the Pakistani election this week.

Clearly, continuing to think we will attrite the Taliban into submission is foolish. The only war weariness on display in Afghanistan has been that of civilians, like the men who walked 400 miles from Helmand to Kabul last month to demand peace.

Despite all of these grim realities, the Taliban has reasons to want peace—at least temporarily. Though it is able to intimidate local leaders and attack government forces in much of the country, the insurgency is unable to take and hold even a small city like Kunduz. When Taliban forces mass, they are inevitably devastated by U.S. firepower. The Taliban’s senior and mid-level leadership has been decimated by U.S. drones and special operations raids, even in the supposed safe haven of Pakistan’s tribal area. A rare short ceasefire for Eid last month has also provided a glimmer of hope.

In what has become a hallmark of the Trump administration’s approach to foreign relations, U.S. officials have been told to begin negotiations without any preconditions. Previously, the United States had insisted that the negotiations must be between the Taliban and the Afghan government. We now seem to have a consensus in favor of negotiation. President Trump, his generals and Afghan president Ashraf Ghani all appear to support at least sitting down with the Taliban.

Are we seeking a real settlement in Afghanistan, or just Vietnam-style “peace with honor” and a decent interval to allow our remaining troops to withdraw? With this administration, it is anyone’s guess—but the latter goal seems most likely. Negotiations with North Korea and NATO have been empty public relations triumphs, with the underlying issues unresolved.

Yet “declare victory and go home” is exactly what we should aim for. As some suggested at the time, we should have done just that after killing Osama bin Laden in 2011. The money and lives spent since then have achieved nothing. It is hard to credit our continued presence in Afghanistan to anything more than inertia and the refusal of American leaders to countenance losing a war on their watch.

If negotiations yield a long-term ceasefire and a window for a U.S. withdrawal, President Trump should leap at the chance to bring the remaining 14,000 American troops home. There are other actors in the region—Russia and Iran foremost among them—who have a vested interest in keeping the Taliban from dominating Afghanistan. If Afghanistan does revert to the control of a hostile theocracy, we retain the ability to return and punish or even overthrow a regime as quickly as we did in 2002. U.S. security policy in Afghanistan should be governed by “butcher and bolt,” not “you break it, you buy it.”

Our war in Afghanistan has lasted longer than American participation in World War I, World War II and Vietnam combined. If President Trump can use negotiations with the Taliban to withdraw U.S. troops with even a modicum of saved face, he should take it.