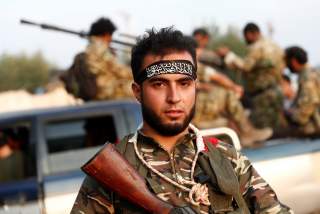 Vice President Mike Pence claims to have arranged a “cease-fire” between Turkey and the Syrian Kurds, but no one is on the same page.

“This is not a cease-fire, this is a pause for our operation,” said Turkish foreign minister Mevlüt Çavuşoğlu. However, he echoed Pence’s claims on the parameters of the agreement.

According to a joint U.S.-Turkish readout of the meeting, the two sides agreed to a “safe zone” that will be “enforced by the Turkish Armed Forces” with U.S. cooperation. Kurdish forces will withdraw from a strip along the Syrian-Turkish border, dismantling their fortifications and handing over their heavy weapons.

Gen. Mazloum “Kobani” Abdi, high commander of the Kurdish-led Syrian Democratic Forces (SDF), told Kurdish television that the SDF accepts a limited cease-fire between Ra’s al-Ayn (Serê Kaniyê) and Tel Abyad, and signalled that he will not accept a permanent Turkish presence in Syria.

“Cease-fire is one thing and surrender is another thing, and we are ready to defend ourselves,” said Salih Muslim, leader of the Democratic Union Party, the most powerful Syrian Kurdish faction. “We will not accept the occupation of northern Syria.”

“This wide divergence is a recipe for renewed conflict—Turkey will likely claim that the SDF is not living up to the deal and will use this as justification for renewed attack,” said Foreign Policy Research Institute fellow Elizabeth Tsurkov.

When asked by the National Interest, SDF diplomats in Washington declined to comment.

Pence negotiated the agreement in an October 17 trip to Turkey alongside Ambassador James Jeffrey, who cancelled a last-minute congressional hearing in Washington to attend.

The agreement gave the SDF one hundred and twenty hours to comply.

“Under the terms of the deal, championed by Vice President Pence, the SDF would essentially have to surrender the core areas of control to Turkey, and would essentially have to voluntarily deport itself from its homeland to someplace else in Syria,” said Center for a New American Security fellow Nicholas Heras, who has advised U.S. counterterrorism officials. “What President Trump's team has actually done is try to force the surrender of its best counter-ISIS partner in Syria to Turkey.”

Pence’s visit to Ankara came nine days into a Turkish offensive in northeastern Syria. U.S. forces had tried to broker a “security mechanism” deal between the SDF and Turkey, in which the SDF disarmed itself along the border in exchange for protection against a Turkish incursion.

But after an October 6 phone call with Turkish president Recep Tayyip Erdoğan, Trump suddenly announced that U.S. forces were moving out of the way so Turkey could begin an operation against the SDF. Turkish and Turkish-backed forces crossed the border two days later, and the SDF agreed to allow Russian- and Iranian-backed government troops to rush in to fight Turkey.

“Are you asking me to surrender [thirty kilometers] of my land and then discuss these points? Let me make sure I understand, the United States of America wants Turkey to occupy this land?” Abdi had shouted at a U.S. State Department representative on the phone, shortly before making the deal with the Syrian government. “We have no intent to disarm our forces during this confrontation with Turkey. I will not disarm so Turkey can come in to control us and make the Kurdish people slave to them, I will not agree to that.”

The images of Russian troops occupying former U.S. bases, and the idea of “betraying” a close U.S. partner, enraged many sections of the American public. Trump ally Sen. Lindsey Graham (R–S.C.) spoke out against the decision, and over a hundred Republican congressman voted to condemn the withdrawal.

“I want Turkey to understand it's not just Trump and Pence and Pompeo. It's the rest of us," Graham said at an October 17 press conference proposing sanctions on Turkey. “This is about our honor.”

Sen. Chris van Hollen (D-MD) appeared on stage alongside him: “I think we all recognize that much damage has already been done . . . but we can demonstrate in a bipartisan way that American leadership matters here in the Congress.”

However, the withdrawal was a victory for a faction of Cold War minded pro-Turkey hawks in Washington.

“We got strategically stupid after 9/11,” complained Hudson Institute fellow Michael Doran, referring to the Kurdish component of the SDF, at an event at the SETA Foundation. “We made counterterrorism a strategic priority” but “not against the [Kurdistan Workers Party], not against Hezbollah.”

“The YPG never abandoned its relationship with Russia and Iran,” he added, referring to the Kurdish section of the SDF. “Obama’s entire vision of the Middle East was to align with the Iranians.”

Instead, Doran said, the United States should work to bring Israel, Turkey, and Saudi Arabia together in an alliance.

“Iran is the enemy,” Doran stated. “There is a potential for Turkey and the United States to find themselves, as they were during the Cold War, as close allies.”

Indeed, Syrian official Buthaina Shaaban called Erdoğan an “aggressor” and “occupier of our land” in response to the ceasefire, setting up Damascus and Russia for a conflict with Turkey.

But even if the Trump administration moves closer to Turkey, the relationship between the country and Congress will sustain long-lasting damage. It’s unclear whether the latest cease-fire will mollify the cries to punish Turkey.

“While a 120-hour cease-fire is welcome, the other terms cave to the maximalist demands of Erdogan and would allow Turkey to ethnically cleanse a big swath of Kurdish areas and lead to a revival of ISIS,” wrote van Hollen, a few hours after the cease-fire was announced. “[Graham] and I will continue to pursue our sanctions bill.”