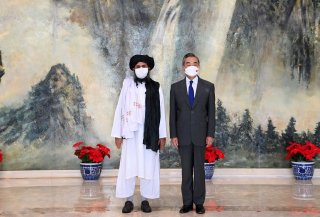 In an interview published with La Repubblica, an Italian newspaper, on Thursday, longtime Taliban spokesman Zabihullah Mujahid claimed that the group would rely heavily on trade and investment from China as it consolidated its control over Afghanistan.

Mujahid acknowledged that, with the United States gone and the previous Afghan government destroyed, the Taliban had taken control over Afghanistan’s economy, and its maintenance would be a key test of their ability to govern. Consequently, Mujahid stressed, the Taliban would push for an economic comeback in Afghanistan—and, in the absence of U.S. and Western aid, would seek financial help in Beijing.

Following the Afghan government’s collapse on August 15, the Taliban emerged victorious in their twenty-year war against the United States and NATO, which completed their withdrawal from Hamid Karzai International Airport in Kabul on August 31. However, the Western powers, which underwrote the Afghan government’s budget, has shown a clear unwillingness to do the same to a Taliban administration. Moreover, much of the government’s money remains inaccessible to the group; some of it was taken during the evacuation, while much of it is physically located in the United States, which is unwilling to return it.

Because of these development, fears of an economic collapse and potentially a famine are widespread. United Nations Secretary-General Antonio Guterres warned that Afghanistan would face a “humanitarian catastrophe” in the coming months, appealing for emergency funding for the country’s UN relief program—which, according to the organization, is only 39 percent funded.

China, which shares a narrow border with Afghanistan, could play a key role in preventing a dire outcome in that country. Mujahid stated during the interview that “China is our most important partner and represents a fundamental and extraordinary opportunity for us, because it is ready to invest and rebuild our country.”

The Taliban spokesman cited China’s Belt and Road Initiative, which has sought to establish a “New Silk Road” in Asia, as a source of investment. He highlighted Afghanistan’s abundance of natural resources, notably including copper mines, which could be modernized with Chinese engineers and equipment and exported via China around the world.

Mujahid repeated that Afghan women would be free to continue their education and work most jobs under Taliban rule, although he indicated that the group would not allow them to serve as political leaders. Reports from rural areas under the group’s control have suggested that girls’ schools have been closed, and some women have been fired from their jobs; it is still unclear if these are part of an organized Taliban campaign or the actions of individual commanders.