China's Next Military Move: A Base in the Persian Gulf? 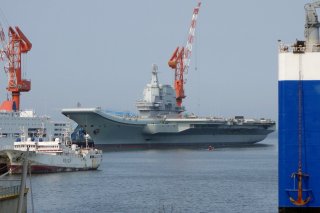 For a generation, China has expanded its economic outreach to the Middle East but has largely remained diplomatically neutral and militarily absent. Beijing, for example, maintains cordial diplomatic relations with Israel, Saudi Arabia, and Iran. It often abstained on contentious UN Security Council resolution. And while Chinese Navy ships do make occasional port calls in the Iranian port of Bandar Abbas, but China’s non-combatant evacuation operation from Libya at the beginning of that country’s civil war was far less coordinated and effective than Chinese authorities claimed.

President Xi Jingping’s assertiveness may not be limited to China’ periphery, in Hong Kong, the South China Sea, and Ladakh. China, for example, not only established a military base in Djibouti within miles of the U.S. presence, but also has begun to interfere with U.S. pilots in the region.

Now, according to the Iranian press, it appears that China may be seeking a more permanent base in the Persian Gulf. Majid Reza Hariri, speaker of Iran-China Joint Chamber of Commerce, traced increased Chinese involvement both to Ahmadinejad-era agreements and to Xi’s 2015 visit to Iran, in which the Chinese president both met with Supreme Leader Ali Khamenei and President Hassan Rouhani, and signed agreements involving both the security and military sectors.

Within the Iranian parliament, rumors now abound that one of these agreements include the lease of facilities on Kish island (Kish is where Bob Levinson disappeared, before being held by Iran until his death years later and where the Islamic Revolutionary Guard Corps onloaded 50 tons of weaponry onto the Karine-A before attempting to smuggle it to the Palestine Liberation Organization). The rumors about the alleged lease started airing in the conservative Iranian news agency Tasnim in February 2020. Alef.ir, a news site affiliated with conservative parliamentarian Ahmad Tavakoli, quoted Hassan Norouzi, a parliamentary hardliner, announcing that he had written to Rouhani to explain why "Negotiations [have been] underway by the government to hand over Kish Island to the Chinese for 25 years.” After complaining about government secrecy in its past dealing with Beijing, Norouzi announced, “If there is any discussion about this, we will definitely stop it, and the Chinese officials should also know that such transfers will not take place."

While Norouzi’s populist rhetoric may resonate with his working-class constituents in Robat Karim, an impoverished district near Tehran’s Imam Khomeini International Airport, parliamentary outrage is a non-factor in Iranian security and defense calculations. In practice, Iran’s elected parliament has no power to counter the military, defense ministry, or supreme leader. That he would air such threats publicly, however, likely suggests that there is some truth behind the rumors and that Chinese work is either progressing or becoming more visible.

For the past half-century, the United States has essentially dominated international waters in the Persian Gulf uncontested by any Great Power. As in the South China Sea and in the Bab el-Mandeb, however, Xi may have ambitions to challenge the United States and assert its military influence over yet another strategic chokepoint.

China’s growing military assertiveness has various ramifications. Too often, the State Department has assumed that where it leads, Gulf Cooperation Council members would follow. Arab Gulf states might be frustrated with Washington, but they understood the threat from Tehran meant they had little choice but to grin and bear American arrogance. Congressional and partisan hostility toward Saudi Arabia, however, increasingly causes its leaders to look for balance farther afield. While the United States is adept at deploying its forces, it has less accustomed to having to compete. It is becoming increasingly urgent, however, that it does so; Washington can no longer take the United Arab Emirates, Saudi Arabia, and Bahrain, let alone Kuwait, Qatar, and Oman, for granted.

Likewise, China’s growing military ambitions in the region make it more crucial that Israel stops its flirtation with Beijing. A generation of Israeli leaders has tried to have it both ways: a partnership with the United States while seeking to sell sensitive military technologies to China. Many Israeli officials rationalize that by cultivating China, they can keep it from fully casting its lot with reactionary regional regimes. That was always naïve, but should China be building a base in the Persian Gulf, it should end that illusion once and for all. If Israelis do not conclude similarly, then it is time for both Republicans and Democrats to consider continued guarantees to maintain Israel’s qualitative military edge. After all, U.S. investment in Israel’s security was always part of a broader U.S. strategic calculation. If Israel becomes a strategic liability in a new Cold War, it behooves the United States to mitigate the threat Israeli technology leakage could have on U.S. forces regionally.