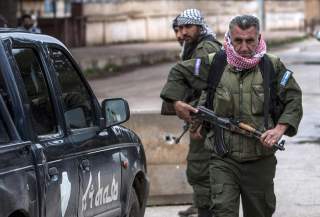 Church bells rang out across the plains of northeast Syria, warning villagers to seek shelter from incoming air raids. It was the first time in a century that the Christian communities in the region were forced to take shelter from a Turkish attack.

The Syriac-Assyrians and Armenians of northeast Syria have been divided on their feelings towards the Kurdish-led, U.S.-backed Syrian Democratic Council (SDC) that took control of the area after the defeat of ISIS. But they remain united against the prospect of a war between Turkey and the Kurds, which is now beginning to wreak havoc on their homeland.

“They want to finish the job started a hundred years ago in the Seyfo,” said Bassam Ishak, using a Syriac-language term for the 1915 genocide of Christians in present-day Turkey. “There is a solidarity among Syriacs and Assyrian political parties in condemning the attack, because of the history, for one thing, and second, because nobody wants to see a neighboring country come and attack their homes and force them out.”

Ishak, an SDC diplomat of Syriac-Assyrian origin, said that indigenous Christian ethnic groups used to be one-third of northeast Syria’s population, but many left during the Arab nationalist regimes of the twentieth century. There are no reliable statistics today, but Ishak estimates that there are only forty or fifty thousand Syriac-Assyrians left in the region.

In February 2015, ISIS attacked the Khabour Valley, destroying churches and taking hundreds of Syriac-Assyrians hostages. According to the Assyrian Policy Institute, the campaign “effectively end[ed] the Assyrian presence in the Khabour Region.”

“For Assyrians, history is repeating itself—again and again. That realization is crippling for a people that has experienced immense suffering and is still affected by the lasting consequences of the events of 1915,” said Assyrian Policy Institute director Reine Hanna.

European Syriac Union member David Vergili told the National Interest that Syriac-Assyrian villagers in the border region are now fleeing for al-Hassaka and the southern neighborhoods of al-Qamishli, two cities founded by survivors of the 1915 genocide. (Syriac-Assyrians sometimes refer to al-Qamishli as Beth-Zalin.) “If the conflict continues in this way, I'm sure that the Syriac people will also leave these big cities,” Vergili said.

According to reports in the Turkish media, the Turkish army plans to take al-Hassaka in the second phase of operations. The urban areas of al-Qamishli are outside the reported plan, but Turkish airstrikes and artillery fire have struck Syriac-Assyrian neighborhoods inside the city.

“They’re bombing where I was supposed to go,” said Ishak, who was planning to visit al-Qamishli before the Turkish operation prevented him from entering Syria. “The residential area that they bombed is a mixture of Kurds and Christians, but they must have known that it has a Christian population. They want the Christians to leave.”

A few of the names on a civilian casualty list from al-Qamishli released by the Kurdish Red Crescent appeared to be Syriac.

The National Interest reached out to the Turkish embassy in Washington, but a man who answered the phone declined to comment, claiming that “there is no press counsellor here now.”

According to a member of the Armenian parliament, sixteen Armenian families were already being evacuated from the area of Turkish operations. “Our compatriots living in Qamishli do not yet see a need to leave their settlements, but if there are people who will decide to come to Armenia, the state is ready to welcome them,” claimed Zareh Sinanyan, High Commissioner for Diaspora Affairs for the Republic of Armenia and former mayor of Glendale, California.

Sinanyan told the National Interest that there are about three thousand Armenians in al-Qamishli, and that the situation is rapidly changing.

The operation followed a Sunday night tweet by President Donald Trump in which he announced that U.S. troops would leave the Turkish-Syrian border, where they had been coordinating with Turkish forces in a “security mechanism.” In a Thursday night phone call, the State Department claimed the Turkish operation was a “bad idea” and that Turkey did not have a green light to move forward.

Erdoğan said that he is targeting the Kurdistan Workers Party, an separatist organization in Turkey that the Turkish government accuses the SDF of sheltering.

In a Thursday statement, Erdoğan claimed that “the Christian leaders there made a statement and expressed confidence in us.” However, no Syrian church or Christian organization has expressed such a statement. The closest came from the World Council of Arameans, which endorsed the U.S. withdrawal and condemned the SDF, but also warned that Syriac-Assyrian civilians will suffer in the operation.

“The question of the relations between Kurds and Syriacs is complicated. It's true that some Kurds also played a big role in 1915, but today there are Kurds who accept and apologize for their crimes in 1915,” Vergili claimed, referring to the SDF and SDC as a “joint project of the peoples of northern Syria.”

Still, many Syriac-Assyrians view the SDC and SDF as a Kurdish project, and see little reason to trust the Kurds.

“My general impression is that Assyrians are extremely frustrated with the Kurdish administration for what they've alleged as abusive behavior toward Assyrian civilians,” said American freelance journalist Marlo Safi. In September 2018, she conducted an investigation for the National Review about a fight between SDF-affiliated authorities and the Syriac Orthodox Church over school curriculums.

“Kurdish authorities have consistently denied violations by security forces and attempted to conceal them from the press and human rights groups,” the Assyrian Policy Institute said in a statement condemning the arrest of journalist Souleman Yusph that month. “Assyrian journalists, researchers and ordinary civilians risk their lives daring to report on the reality of Assyrians in the region.”

“At no point has the U.S. Government pursued any policy in Syria that has taken into account the needs of Assyrians in any way, and unfortunately we are seeing the result of that today,” Hanna told the National Interest. “It’s now too late to change course.”

Whatever they think of the SDF and SDC, the Syriac-Assyrian community appears to be united against the Turkish intervention.

“In the wake of the sudden American withdrawal, the various actors in the region are now poised to engage in a major conflict which could lead to the end of the Assyrian presence in Syria,” the Assyrian Policy Institute said in a Thursday statement. “American withdrawal allows Turkish-supported extremism to be reasserted in the area.”

Turkey plans to use the Syrian National Army, an alliance of Islamist rebels, for its operations in Northern Syria. The Army of Islam, one of the members of the Syrian National Army, has paraded around hostages from Syria’s religious minorities in cages. Its late leader, Zahran Alloush, once referred to some minorities as “filth” that should be “cleansed,” although he walked back the rhetoric in a later interview.

“Turkey can only expand outside its current borders by embracing a religious agenda,” Ishak claimed. “What would bring together a Syrian, a Kurd, an Arab, and a Turk together like it was during the Ottoman Empire? It's the religious identity.”

The militant group has indeed taken advantage of the Turkish campaign to make a comeback. On Friday, a car bomb claimed by ISIS ripped through al-Qamishli, killing three people and wounding nine. Less than an hour later, ISIS members imprisoned in the same city took advantage of Turkish artillery fire on their prison to escape, according to an SDF-affiliated news outlet.

The car bombing cut Ishak’s interview with the National Interest short, as he began receiving updates from al-Qamishli.

“Oh my God, they keep sending me pictures, and videos, and it looks horrible what's happening there,” he said. “I'm very sorry, but I have to go.”

Matthew Petti is a national security reporter at the National Interest and a former Foreign Language Area Studies Fellow at Columbia University. His work has appeared in Reason and America Magazine. Michael Greco, an intern in the Center for the National Interest’s Middle East program, contributed reporting.