Commitment Creep: The Danger of Treating U.S. Contractors as a ‘Tripwire’ 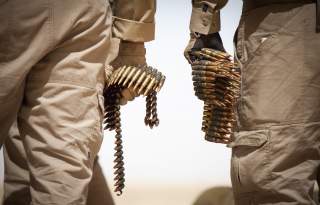 Over the past few weeks, the long-simmering tensions between the United States and Iran have escalated to the edge of war. Highlights of the events include a partially burned embassy compound, an assassinated Iranian general, Iranian ballistic missile strikes against bases housing U.S. troops in Iraq, a commercial jet mistakenly shot down by Iran, and the first major meme of the new decade. Thankfully, both sides appear to be pursuing de-escalation. While countless articles have analyzed every other element of the present crisis, the coverage has glossed over the fact that it was precipitated by the death of an American contractor. This signals that contractors may now function as America’s newest tripwire, significantly increasing American escalatory commitments abroad. Unfortunately, the nature and strategic role of contractors make them a terrible tripwire.

The use of contractors is neither new nor rare. Despite how they often manifest in the public consciousness, contractors are not just mercenaries. Most contractors perform roles in logistics, technical support, and administration, while others participate in more dangerous operations such as transportation and physical security. The Department of Defense would struggle to perform many of its essential tasks without the extensive use of contractors. Contractors are essentially used to fill the gap between what the government wants to do and what it has adequate capacity and personnel to do.

From a political standpoint, contractors have traditionally had a lower profile than uniformed forces. When an American military member is killed the Defense Department must issue an announcement of the death, which is usually featured on the next day’s headlines. However, when contractors are killed, there is no such requirement: the company will inform the family, but many of the deaths go unreported and unpublicized. Because contractors tend to be lower profile and less transparent than uniformed personnel, they are often used by governments to perform tasks that would be politically unacceptable to domestic audiences. When American politicians tout the relatively low numbers of U.S. forces in Iraq or Afghanistan, they usually neglect to mention the number of American contractors on the ground, which often exceeds the number of American uniformed personnel. Contractors are not government officials, and they rotate in and out of areas of operations constantly, which makes them difficult to track. During the Iraq War, the Pentagon could only give the vaguest estimates of the numbers of contractors in the country. While there have been improvements in accountability since then, the Defense Department’s numbers are nearly impossible to verify.

Russia has also used contract forces to great effect across the globe, including in Syria, Ukraine, Venezuela, and now Libya. The presence of these forces has elicited substantially less press coverage and weaker responses from the U.S. government than the presence of Russian troops would have. In May of 2018 when a detachment of U.S. Special Forces killed an unknown number of Russian mercenaries in Syria, it did not prompt an escalation between the United States and Russia. While the contractors were aligned with Russia and Syrian government forces, the Russian government told American commanders that they were “not their people.”

The Trump administration’s decision to use American contractors as a military tripwire effectively precipitated the present crisis with Iran. Despite Trump’s warnings against killing Americans, there was little reason for Iran to expect such a drastic escalation, given the lack of a forceful American response to past contractor deaths. Even assuming that Iran had command and control of Kataeb Hezbollah, the Iraqi militia that killed Nawres Hamid, and knew that American contractors were present in the area they attacked, they would not have assumed that the death of an American contractor would have prompted the same magnitude of retaliation as the death of a U.S. service member. In this case, the Trump administration responded by killing at least twenty-four militia and wounding fifty others, some of whom are part of the Iraqi security forces—a clear escalation and heavy response for the loss of an American contractor.

The ultimatum that Trump has attempted to assert, that any attacks on Americans will result in severe punishment, is designed to convert people into tripwires for escalation. But in order for a tripwire to work effectively, it must be clearly demarcated and well-defined. Its function is to signal national interests and positions that will precipitate a disproportionate response if violated. The problem at the heart of the Trump administration’s new strategic position on contractors is a fundamental lack of clarity. The United States uses contractors in a variety of ways that are ill-suited to this kind of “red line” deterrence. By definition, the government exerts less control over contractors than its own officials, which is partly why their deaths are treated differently than those of government personnel. It is doubtful that the United States knows the location of its contractors at all times, and it is certain that its enemies don’t. The administration can choose to treat contractors as a red line but no one will be able to see it. This new policy isn’t creating a tripwire, it is creating a landmine.

Perhaps the administration believes that this uncertainty will prevent hostile actors from attacking any area where U.S. contractors could conceivably be present, for fear of massive retaliation. Instead, America’s enemies will probably choose to test its commitment rather than exercising restraint. It is highly unlikely that the American people are willing to commit to a disproportionate escalatory response every time a contractor is killed or hurt. Any refusal to escalate after designating a tripwire will ultimately damage U.S. credibility, despite any retroactive justification that might be offered. This lack of strategic flexibility is why tripwires must be clearly and carefully defined and used sparingly. Unfortunately, the current administration has demonstrated an aversion to careful consideration and strategic thought, and this new policy drift will only further harm our credibility and interests abroad.

Charles Meire is a national security professional and has conducted research concerning coercive diplomacy and the radicalization process.

James Siebens is a Research Associate with the Defense Strategy and Planning program at the Stimson Center, and an editor of Military Coercion and US Foreign Policy: The Use of Force Short of War (Routledge, forthcoming).

The analysis presented here belongs solely to the authors.