The Conditions are Right for a Third Palestinian Intifada 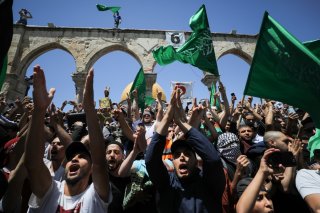 It has been nearly two decades since Ariel Sharon, then the candidate for prime minister, visited the Temple Mount in Jerusalem, Judaism’s holiest site and the third holiest in Islam. Weaponizing the flaming tensions, a radio broadcast by the Voice of Palestine featured then-Palestinian Authority Chairman Yasser Arafat crying out: “move immediately to stop these aggressions and Israeli practices against holy Jerusalem.” Days following Sharon’s visit, the same broadcast repeated calls for “all Palestinians to come and defend the Al-Aqsa Mosque.” The result of this incitement was a four-year-long Palestinian terror campaign that left over one thousand Israelis and over two thousand Palestinians dead. The conditions for a third intifada are almost, and most unfortunately, near perfect.

The first condition was put in motion by Joe Biden’s decision to normalize relations with the Palestinian Authority (PA) without any preconditions. This allowed Biden to restore U.S. funding of the PA without any request that the decades-long program of providing financial incentives to terrorists be halted or that educational reforms are implemented to combat institutionalized anti-Semitism—both requirements were featured the 1993 Oslo Accords and both have been duly ignored by Palestinian leaders since. This form of appeasement not only emboldened Palestinian militants but it legitimized the continued rule of Mahmoud Abbas—a Palestinian dictator who is now serving his fiftheen year in office after being elected to serve for four in 2005. The Biden administration could have used the Palestinian Authority’s desire to reestablish ties with the United States as leverage for Palestinian reforms that would have led to a fruitful peace process. It was a strategic failure of epic proportions.

The second condition for a renewed intifada can be seen in the low popularity rates of Mahmoud Abbas and the Palestinian Authority—a similar condition that contributed to the beginning of the Second Intifada. In early 1996, Yasser Arafat had enjoyed a 71 percent approval rating among Palestinians but saw that number drop by 30 percent by the eve of the Second Intifada in July 2000. Likewise, in terms of erosion of public confidence in governance issues in 1996, 43 percent of Palestinians gave a positive evaluation of Palestinian democracy and 64 percent a positive evaluation of the Palestinian Authority’s performance. By the eve of the Second Intifada in 2000, those numbers had dropped respectively to 21 percent and 44 percent. This noticeable growth in Palestinian frustrations correlated with public opinion polls at the time measuring Palestinian support for violence against Israelis. In June 1996, that figure stood at an almost record-low 21 percent, but it skyrocketed to 52 percent in just four years.

Similarly, a 2020 poll shows that 77 percent of Palestinians support ending security coordination with Israeli authorities, 69 percent support ending the implementation of the 1993 Oslo Accords, and 64 percent support resorting to armed struggle as a means of responding to Donald Trump’s proposed peace plan. Given Abbas’ recent decision to cancel Palestinian national elections and the inept handling of the Covid-19 pandemic by Palestinian leaders, frustrations in Gaza and the West Bank may be at an all-time high. The further fueling of this condition can be attributed to a general failure by mainstream outlets to cover the toxicity of Palestinian politics and, rightfully, present the Palestinian Authority as a tyrannical entity that continued to prioritize the murder of Israelis over the well-being of its people. This is the result of the ongoing obsession to whitewash the crimes of Palestinian leaders while simultaneously positioning the Jewish state as the sole perpetrator responsible for all suffering and the lack of a Palestinian state—a modern anti-Semitic libel.

The last condition being set in place is that of a necessary catalyst that can be manipulated into a justification for the use of indiscriminate violence. Similar to Ariel Sharon’s visit to Temple Mount on September 28, 2000, the false claims that the Al Aqsa mosque is in danger and needs to be protected continues to be widely circulated. Completely omitting the fact that large stones and Molotov cocktails were being stored inside the mosque, media outlets—such as The Guardian and Al Jazeera—and members of Congress reverberated the insidious lie that the mosque was under threat from Israel. A complete fabrication considering that Israel, in order to “protect the peace,” has forbidden Jews from praying at the holiest site in Judaism.

The conditions for a new intifada may be in place but preventative measures can be implemented to reduce tensions and halt the escalation of violence. First, the international community must support Israel’s right to defend itself against all forms of violence and terrorism, without any form of politicization, must be unanimously condemned. Second, the narrative of both the Palestinian Authority and Hamas—regarding the imminent threat that Al Aqsa faces—should not be circulated, applauded, or even shared. Aside from it serving as an unsubstantiated claim that can be interpreted as modern anti-Semitic libel, the accusation will only serve to fuel Palestinian willingness to engage in violence. Lastly, the United States should make funding to the Palestinian Authority conditional on the abandonment of the notorious pay-for-slay policy and educational reforms to combat institutionalized antisemitism in Palestinian territories.

Those that seek to weaponize the frustrations and sense of hopelessness among Israelis and Palestinians are not advocating for peace but pushing two peoples down a road that inevitably leads to more death and suffering. The Second Intifada pushed the Israeli electorate away from the Left and center into the Right and traumatized the millions of Israelis that were ready to make territorial concessions to a terror-supporting Palestinian regime—its effects have been seen in every Israeli national election since 2005. Those who are interested in peace will attempt to avoid a similar terror campaign at all costs and will not attempt to use their platforms to disseminate hate, lies, and intolerance.