Containment is the Correct Strategy for the Bipolar Middle East 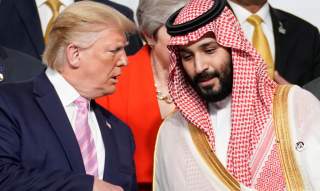 While many political scientists, Kenneth Waltz being perhaps the most prominent, believe that a bipolar world structure is the safest, the fact remains that alignment into bipolarity preceded every major war since the Peace of Westphalia. Perhaps that is why Richard Haass asserts the opposite, peace comes from multipolarity. Waltz suggests that the Cold War was proof of stability in a bipolar world. However, the Cold War was not so cold. Over three million people died in the Korean War, a conflict that was clearly a part of that East-West struggle. Whether it was the alignment leading up to World War I or The War of Spanish Succession, throughout history bipolarity established an opportunity for war on a grander scale. The current alignment into a bipolar Middle East presents just such a concern.

Following most great conflicts, exhaustion of nations led to peace, and peace treaties, attempts at what Secretary of State Henry Kissinger labeled “legitimacy.” This often created a multipolar region or world. As time passed, nations and their leaders would rely less on the created legitimacy and begin to rely on the balance of power to guarantee their survival and advance their agendas. Balance of power policies then led to alignments with like-minded nations. Soon the multipolar structure transitioned back to a bipolar one. What followed, sometimes instantaneously, was a major war.

Since the Islamic Revolution that swept the Ayatollahs to power in 1979, Iran has worked through proxies, terrorist groups like Hezbollah, to “export its revolutionary ideology and expand its influence beyond its borders.” Over the past forty years, the result is a degree of alignment and a near bipolar Middle East. In a report from the Institute of International Strategic Studies, the authors conclude that “the Islamic Republic of Iran . . . has tipped the balance of effective force in the Middle East in its favor.” The result is a “unipole” in the region from Yemen, through Iran and Iraq, Syria and Lebanon. With Israel and Saudi Arabia now sharing military intelligence, an aligning Egypt, Jordan, Israel and Saudi Arabia are forming an opposing unipole. The Middle East is structurally becoming a bipolar region and thus ripe for a major conflict.

While I disagree with Waltz that bipolarity brings peace, the fact that the Cold War should have been much worse is obvious. Meaning, in an emerging bipolarity like we have in the Middle East today, we should consider the actions leaders took to first, prevent the worst possible outcome, and secondly win the Cold War. An analysis of the initial U.S. strategy employed during the Cold War reveals an arms and alliance race where millions were killed in wars in Korea, Vietnam, Africa and elsewhere. Eventually, an effort at détente started with Richard Nixon’s visit to Moscow. However, détente did little to curb Soviet aggression and ultimately ended with Ronald Reagan’s response to the Soviet invasion of Afghanistan.

What became known as the Reagan Doctrine was a strategy of containment, confrontation and “roll back” that created an economic struggle with which the communist system could not compete. President Ronald Reagan confronted the Soviets with Pershing II missiles in Europe, built a space-based missile defense system, initiated the invasion of Grenada to halt its control by Cuban Communists, and supported anti-communist insurgents throughout the world. He secured assistance from Congress of nearly $2 billion in military aid to the Mujahedeen fighting the Soviets in Afghanistan. What brought the Soviets to the table was a recognition that their economy could not compete with the containment through sanctions and the confrontation through forward-placed advanced U.S. military capability. In less than a year after his presidency, the Berlin Wall fell, and in less than three years, the USSR was dissolved. Reagan’s decisive action and display of firm resolve worked.

What worked, to prevent the worst-case scenario and end the Cold War with a victory for the West, confrontation and containment, will work with Iran as well. Interestingly enough it would appear to be the current Trump Doctrine. From the travel ban to tough new sanctions to walking away from the Iran nuclear deal to bumping up U.S. military spending and pressuring NATO to do the same, President Donald Trump has shown, like Reagan, a willingness to deploy every tool short of military confrontation to impose unbearable costs on his adversary.

By raising the ante for Iran, Trump has echoed Reagan’s own buildup in the arms race with the Soviet Union. Like Reagan, Trump is willing to leverage U.S. strength knowing that Iran can’t match it. His decision to assassinate Iran’s Maj. Gen. Qassim Suleimani removed the mastermind of the forces which created the bipolarity and has shown that the United States will not tolerate open aggression against American forces.

Like Reagan, Trump has also shown restraint. He did not fire back after the September attacks on Saudi oil facilities. He has given measured, proportional responses, similar to Reagan’s restraint when Iran took out an American warship in 1988. Despite a publicly confrontational posture, Trump has minimized the risk of escalation.

Trump’s strategy of containment and confrontation is the correct one. It is what Reagan used to achieve a strategic victory with the collapse of the Soviet Union, and it is what we need today for the bipolar Middle East.

Rep. Mark Green, M.D. is a graduate of West Point and a combat veteran who served in Afghanistan and Iraq. He was part of the mission to capture Saddam Hussein, and he interviewed Saddam Hussein for 6 hours on the night of his capture. He serves on the House Homeland Security and Oversight Committees.