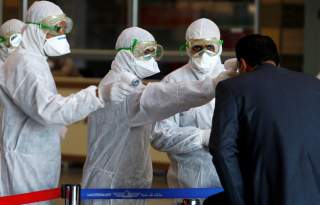 The official COVlD-19 death toll in Iran has risen to 237 people today as the U.S.-Iranian diplomatic standoff continues to slow down international cooperation to fight the new coronavirus disease.

The Trump administration quietly loosened sanctions on the Iranian banking system to allow for humanitarian trade and offered the Iranian government help in dealing with COVID-19 at the end of February. But the diplomatic breakthrough was short-lived, as Iran has rejected the U.S. offer and U.S. sanctions continue to throw up obstacles in the path of Iran’s pandemic response.

The restrictions on the central bank imposed in September had “created tremendous uncertainty for companies that relied on [humanitarian exemptions] for the export of food, agricultural commodities, medicines, or medical devices to Iran,” the law firm Hogan Lovells explained in a March 5 memo to its clients, so the Trump administration’s “measures indicate an effort on the part of the U.S. Government to facilitate humanitarian trade with Iran.”

“It’s not like they’re doing nothing,” explained sanctions lawyer Erich Ferrari, but “a lot of this is [the Trump administration’s] own doing. They’re trying to reduce the negative effects of their own actions.”

On February 27, the U.S. Treasury had loosened U.S. legal restrictions on the Central Bank of Iran, which had prevented Iran from importing coronavirus test kits and other medicines and medical devices. The next day, Secretary of State Mike Pompeo offered direct assistance to the Iranian government.

“We hope that the government of Iran will heed our offers of humanitarian assistance and medical supplies,” Pompeo reiterated to reporters on Friday. But a State Department spokesperson confirmed to the National Interest on Monday that Iran has “turned down the U.S. offer of assistance both publicly and privately.”

But the humanitarian exemption continues to exclude certain goods. Suppliers need a license to sell certain medical devices, including full-face respirators and certain decontamination systems. It took the U.S. Treasury an average of 77 days to approve and 177 days to deny a license for medical devices, according to statistics released for last year.

The National Interest asked Brian Hook, the State Department official in charge of Iranian affairs, on February 28 whether the Trump administration would consider expanding the humanitarian exemptions to include medical devices like respirators and decontamination equipment.

“We have no new policy announcements at this time,” a State Department spokesperson told the National Interest on Monday.

Ferrari added that the U.S. Treasury’s “guidance to the public” is “just pointing them to a bunch of regulations,” and said that the Trump administration could make it more clear what kind of business with Iran is allowed.

“When you actually get into the details of compliance, it is still a minefield,” said Peter Harrell, an adjunct senior fellow at the Center for a New American Security who specializes in sanctions law.

“If you’re selling $75 million of medical supplies, it’s worth navigating the minefield,” he added. “For smaller transactions, it can make it uneconomical.”

U.S. sanctions law also categorically bans selling medical devices to the Iranian military and police. Harrell emphasizes that this is a “balanced approach” because government-run civilian hospitals are still exempt from the sanctions.

But the Iranian military has muscled its way to the front lines of the coronavirus response, and the ban on selling to security forces imposes “enhanced due diligence” requirements on exporters, according to the Hogan Lovells memo.

“The biggest issue is not so much whether or not sanctions are in the immediate term making it impossible for Iran’s public health sector to respond to the virus,” said Esfandyar Batmanghelidj, founder and publisher of Bourse & Bazaar, an organization that tracks developments in Iran’s economy.

Batmanghelidj said that pre-existing stocks of medical goods should be enough in the short-term but that Iran could run into shortages if the epidemic continues for a long period of time.

The situation inside Iran is currently worsening—and officials have hinted that the true death toll of the pandemic is far greater than the official number.

Iranian officials announced two new measures on Monday to slow the spread of COVID-19. The judiciary announced that it would be furloughing seventy thousand prisoners. Iran’s religious head Ayatollah Ali Khamenei canceled his plans to address the nation on Iran’s spring solstice holiday, which is also New Years Day for Iranians.

“I didn’t say that all these deaths were because of the coronavirus,” he added, amidst accusations of a coverup. “It is possible that many of these individuals had underlying respiratory illnesses.”

Video shared on social media showed a crowd of locals that day setting up an impromptu checkpoint in Mazandaran, another northern province, aimed at keeping tourists out of the coastal region.

Ahmad Lashaki, a member of parliament from Mazandaran, was caught on tape begging Iranian presidential advisor Mahmud Va’ezi to quarantine the province.

“The people of Mazandaran are being annihilated. They are closing the roads,” he said. “Please, close the paths for one week until the situation becomes stable and normal.”