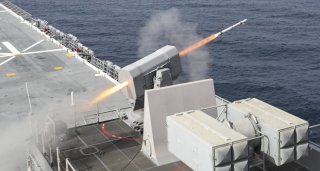 “I have instructed the United States Navy to shoot down and destroy any and all Iranian gunboats if they harass our ships at sea,” President Trump tweeted recently, launching a thousand snarks about the phrasing of “shooting down” boats and prompting the Pentagon to insist at a news briefing several hours later that this is no true policy change, merely a reiteration of the U.S. Navy’s right to self-defense when Iranian Revolutionary Guard fast boats zip uncomfortably close to American warships.

If that’s true, Trump’s tweet may be tallied as posturing more than a meaningful threat of military conflict, an attempt to push back on a domestic narrative of U.S. adversaries taking advantage of the pandemic to make the United States look weak. U.S. and Iranian vessels have been in close quarters in the Gulf for decades, typically avoiding any real skirmishes.

Still, Trump tweeted, and his swipe at Iran felt like nothing so much as a non sequitur when the coronavirus pandemic is a far more pressing concern. Iran’s regional troublemaking is often no more than a periphery concern for the U.S., but that’s especially true right now. Granted, U.S.-Iran relations are far from ideal, but neither can the regime in Tehran pose us an existential threat. The Trump administration should use the pandemic’s disruption of business as usual for a foreign policy reset: Jettison needless wars and escalation; rely on deterrence to postpone new engagement with Iran; and set the stage for a revival of realistic diplomacy when the pandemic is over.

Total U.S. withdrawal from Iraq, Afghanistan, Syria, Yemen, and smaller conflicts around the Middle East and North Africa was overdue before the COVID-19 outbreak began. These wars and nation-building projects do not enhance U.S. security, nor do they resolve the political, cultural, and religious conflicts of the nations which host them. The last two decades of American military intervention in this region have been consistently costly and counterproductive to the United States and local populations alike.

Deferring U.S. departure—even, as in Afghanistan, for the sake of an exit deal—is harmful to all involved. Now, social distancing’s effect on oil prices should give Trump, who said he kept U.S. forces in Syria “for the oil,” fresh impetus to make good on his repeated promises to end “endless wars.” The pandemic only makes it more urgent that our troops come home.

The timeline for some sort of resolution to COVID-19’s spread is uncertain, but Washington can rely on deterrence to forestall significant Iranian aggression against the U.S. during this crisis. Instead of maintaining its useless “maximum pressure” campaign—which has failed to coerce Tehran into a new nuclear deal, incentivized Tehran’s regional troublemaking, and denied innocent Iranian civilians necessary medical supplies—the Trump administration should relax its sanctions regime as a gesture of goodwill amid pandemic. Beyond that, U.S.-Iran relations can be put on hold. Let each country address its coronavirus infections and economic turmoil, and give Tehran’s anger over U.S. abandonment of the Iran deal time to cool.

When the viral threat has been contained, these two moves will position Washington well to start negotiations anew. Productive diplomacy would prioritize working-level talks over high-level summits and seek gradual, achievable ends made possible by mutual concessions, not the all-or-nothing approach maximum pressure entails. The coronavirus pandemic can be an opportunity to shift U.S. policy toward Iran in this pragmatic, de-escalatory direction. But saber-rattling on Twitter is no way to start.

Bonnie Kristian is a fellow at Defense Priorities, contributing editor at The Week, and columnist at Christianity Today. Her writing has also appeared at CNN, Politico, USA Today, the Los Angeles Times, Defense One, and The American Conservative, among other outlets.