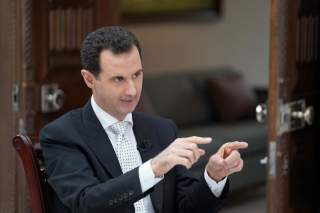 The images of dead and dying children shaking with convulsions and foaming at the mouth were simply too unbearable for the president to watch. Hours earlier, the Assad regime dropped sarin-filled munitions on an opposition village in the northern Syrian town of Khan Sheikhoun, killing dozens and forcing the Washington to yet again deliberate over a response.

President Donald Trump had an idea: why doesn’t the United States just assassinate Assad and get it over with? According to Bob Woodward’s most recent bestseller on the inner-workings of the Trump White House, the president phoned Secretary of Defense James Mattis and suggested Washington take care of the problem the old-fashion way. “Let’s fu*king kill him!” screamed into the phone. “Let’s go in.”

Mattis politely rebuffed the request. Bashar al-Assad remains alive and well, and his forces are months if not weeks away from reclaiming the armed opposition’s last bastion and winning a seven-year-old civil war that has turned Syria into a charnel house. But Trump’s rant to his Defense Secretary presents a stark and consequential question: how easy would it be for the president of the United States to issue a kill order against a foreign-political leader or a head-of-state?

During the early stages of the Cold War, assassinations were actually a part of the intelligence business. The mid-1970s Church Committee investigation on the activities of the Central Intelligence Agency unearthed several CIA assassination plots against foreign dignitaries on foreign soil. Cuba’s Fidel Castro was enemy number one for the U.S. intelligence community throughout the 1960s, a period of time when Langley went to work on creative ways to kill the Cuban revolutionary or incite a grassroots rebellion against him. The plots were Hollywoodesque: one involved lacing Castro’s scuba diving equipment with a biological toxin. Another included a poison pen that the assailant (in this case, a high-ranking Cuban government official) could use to inject toxin into the Cuban leader when the opportunity arose. The CIA also organized a program named Operation Bounty, where Cuban citizens were encouraged to kill high-ranking officials of the Cuban communist party in exchange for a hefty sum of money.

In other cases, the United States wasn’t directly associated with an assassination plot but was aware a plot was taking place. The killing of South Vietnamese strongman Ngo Dinh Diem in November 1963 was organized by the South Vietnamese generals, but the Kennedy administration essentially aided and abetted the change in power by keeping quiet about it and not tipping off Diem. The Kennedy administration, sick and tired of Diem’s antics and desperately looking for an alternative that would stabilize the Vietnamese political scene, made it clear to the coup-plotters that the United States would not only stand aside, but would welcome a change in leadership if it resulted in a more stable South Vietnam.

The CIA’s assassination business came to abrupt end after the Church Committee report was released. President Gerald Ford enshrined a ban on such killings into a February 1976 executive order, one that was reaffirmed by President Ronald Reagan years later in a separate order. The assassination prohibition continues to this day; as Reagan’s directive states, “No person employed by or acting on behalf of the United States Government shall engage in, or conspire to engage in, assassination.”

If President Trump was intent on killing Bashar al-Assad, Kim Jong-un, Ayatollah Ali Khamenei, Nicolas Maduro, or any other foreign adversary of the United States, he could technically do so by simply rescinding the Reagan-era directive and replacing it with his own, less restrictive, directive. Unless the U.S. Congress responded by codifying the Reagan-era assassination ban into statute, there would be little in the way of resistance—outside of bureaucratic inertia or slow-rolling, which the Woodward book makes clear is a feature of this administration—to the president actually bringing the United States back into this murky and stomach-churning business. All that would be required from President Trump is a stroke of the pen.

This isn’t to say that assassinating Assad, Khamenei or Kim Jong-un would be good foreign policy. In fact, it would be downright disastrous. Unlike the movies, which tend to romanticize these daring plots, even an attempted assassination has second and third-order consequences. Killing Kim Jong-un would be nothing short of an act of war instigated by the United States, and the North Koreans would undoubtedly interpret it as such (just to remind everyone: North Korea has upwards of sixty operational nuclear weapons). Bombing Assad’s presidential palace in Damascus would be highly unlikely to stop his regime from continuing to mop up the opposition, nor would Moscow take too kindly to a deliberate attack on its most important proxy in the Middle East. The return of such a policy would also paint the United States in a terribly bad light around the world, causing further rifts with the Europeans, censure from the United Nations, and providing Washington’s adversaries with an effective piece of propaganda.

Yet, this is Donald Trump we are talking about. In Trump’s Washington, literally anything is possible. Bob Woodward’s book exposes Trump as a man who doesn’t particularly care about norms, tradition, and conventionality. The American people may very well wake up one day and learn that the United States is dipping back into the old Cold War playbook.

Daniel R. DePetris is a foreign-policy analyst based in New York City and a political columnist at the Washington Examiner. You can follow him on Twitter at @DanDePetris.

Image: Syria's President Bashar al Assad gestures during an interview with a Greek newspaper in Damascus, Syria in this handout released May 10, 2018. SANA/Handout via Reuters