The Crisis in Syria Is What a Post-U.S. Middle East Looks Like 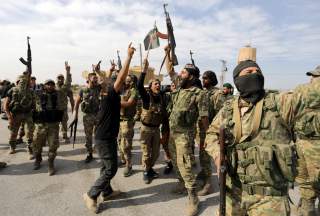 On Friday afternoon, February 21, 1947, the British ambassador to Washington, Lord Inverchapel, showed up at the State Department and informed Under Secretary of State Dean Acheson that his country could no longer continue providing financial and military support to Greece and Italy. The British are abdicating from the Middle East, Secretary of State George Marshall told President Harry Truman.

For several decades, Great Britain, that until World War II had played the role of the world’s leading Western power, attempted to secure its hegemonic status in the Middle East.

But by the end of the World War II, at a time of growing financial constraints and challenges from new international players, it had become too costly for the Brits to maintain their military presence and diplomatic influence in Egypt, the Levant, the Persian Gulf, the Eastern Mediterranean and South Asia, not to mention to try once again to help Jews and Arabs reach an agreement over a disputed territory in the region.

Indeed, with the British defense budget exploding and the Americans pressing London to repay the huge loans it owned them, Britain adjusted to new geopolitical realities, and recognized the limits operating on its ability to contain Soviet encroachment in Turkey, Greece and Iran and asked the Americans to take over at least part of its responsibilities in the Eastern Mediterranean and the Middle East.

Eventually, London ended its prized mandate of Palestine in May 1948, less than a year after giving up the jewel in the Crown of in South Asia.

The transition from Rule Britannia to Pax Americana in the Middle East was completed during the 1956 Suez Crisis, when the United States threatened to withhold financing that Britain desperately needed unless its forces withdrew from the Suez Canal. Later on, in the aftermath of the end of the Cold War and the ensuing victory in the first Gulf War, the United States attained what amounted to the dominant position in the Middle East.

But like Great Britain in 1947, the United States is finding it more and more difficult to maintain its military and diplomatic status in the Greater Middle East. Its defense expenditures constitute close to a third of its overall budget, at a time when the burden of its fiscal debt is becoming unsustainable.

The U.S. military and diplomatic fiasco in Iraq and the collapse of its plans for regime change and nation-building in the Arab world, the failure to defeat the Taliban insurgency in Afghanistan, the growing power of Iran and its regional satellites, the regional instability that followed the Arab Spring, the deadlocked Israel-Palestinian peace process—all these have been clear indications that the era of Pax Americana in the Middle East is over.

Both Democratic President Barack Obama and Republican President Donald Trump recognized these geostrategic changes and tried to adjust U.S. policy in the region to the new realities.

But unlike Great Britain in 1947, the United States cannot not pass the Middle East torch to a friendly global power that shared its interests and values and was willing to assume its responsibilities. Hoping to avoid the messy consequences of taking steps to reduce U.S. leadership role in the Middle East, both Obama and Trump, two vocal critics of the Iraq War and American military intervention in the region, pursued what they hoped to be would be gradual and somewhat peaceful process of disengagement.

But paraphrase what Oscar Wilde said about a second marriage, those expectations amounted to the triumph of a lot of hope over a long and bitter experience.

The two presidents have faced strong opposition from a bipartisan foreign policy establishment, along with its buddies in the media and Washington DC think tanks—the so-called “blob”—who are determined not to allow the White House to challenge their traditional Middle East paradigm.

Even more significant, the notion that the Middle East’s hegemonic power could abdicate its power through a series of cost-free reactive ad-hoc steps proved to be an impossible mission, particularly in the face of strong resistance from U.S. allies in the region who regarded any sign that Washington was cutting on its military involvement as an existential threat.

The realist internationalist Obama tried to follow a planned American withdrawal from Iraq by welcoming the “winds of change” of the Arab Spring and accepting the collapse of a pro-American regime and the coming to power of the Muslim Brotherhood in Egypt.

Obama hoped that a U.S. nuclear deal with Iran would not only avert a military confrontation with the Islamic Republic, but also create incentives for the evolution of a balance of power between the Iranians and the Saudis. If that had occurred, then the Middle East that would not require direct U.S. military intervention to maintain it.

Obama’s successor, who ran for office pledging to end the endless U.S. interventions in the Middle East, turned the Obama strategy on its head, arguing that Iran remained a threat to stability in the region. He argued that Tehran could be contained, and the balance of power in the region could be preserved through an informal alliance of the Arab Sunni states and Israel—all without direct U.S. military intervention.

But if anything, in the same way that Obama's diplomatic flirt with the Islamists in Egypt only helped energize insurgents that upset the status quo—and eventually required U.S. military intervention to avert chaos on Iraq and Syria—Trump’s revoking of the nuclear deal with Iran and the declaration of an economic war further destabilized the region and raised the prospects of a U.S. military confrontation with the Islamic Republic.

The bottom line is that it is very difficult for an American president to pursue policies that challenge a geostrategic axiom that dominates policymaking in Washington—that in the face of a crisis in the Middle East, the United States supposedly has the obligation to immediately “do something” in response, especially since U.S. military planning is based on such a readiness to “do something.”

The other side of the coin is that even United States moves that are in essence tactical and not strategic, like Trump’s decision to withdraw a small number of American troops from a northeastern zone in Syria, are greeted with the hysteria in Washington and in the Middle East, with warnings that we are now supposedly witnessing not only a moral outrage but growing instability in the Middle East; which is kind of rich coming from those who had enthusiastically supported the U.S. intervention in Iraq and kicked off everything leading up to today.

In reality, contrary to the conventional wisdom, there is nothing beyond the strategic pale in the idea that the United States should shift the responsibility of maintaining order in part of Syria to Turkey, to an historic international ally and a member of NATO, and one that has legitimate interests to protect in what an area that it regards as its sphere of influence in Syria.

If fact, any realistic process of a U.S. constructive disengagement from the Middle East should start with an open debate—one that should actually have taken place at the end of the Cold War—on the role that regional powers—including Turkey, Iran, Saudi Arabia, Egypt and Israel—would have in the Middle East in a post-Pax Americana era. Secondary players must adapt to this reality.

That kind of reassessment of America’s current Middle East paradigm should also raise another important issue: isn’t it time for America’s allies in Europe—whose economies, unlike that of the United States, are actually dependent on the energy resources in the Middle East and are impacted by the waves of immigration from the region—to start assuming responsibility for maintaining order in an area of the world that is their sphere of influence?

Of course, that would require the Germans and the French to spend much more on defense and deploy more troops to the Middle East, introduce a strategy to contain a nuclear Iran, and, naturally, to contend with the never-ending squabbling between Israelis and Palestinians.

Americans should also recognize that going to war, or making peace, or just trying to cut military costs, always involve confronting moral dilemmas. The regional wars and bloodbath that followed Britain’s withdrawal from the Indian subcontinent and Palestine were inevitable. Hence, even a process of gradual and mostly peaceful U.S. constructive disengagement from the Middle East would be messy. But like the Brits in 1947, Americans have to ask themselves today: what is the alternative?