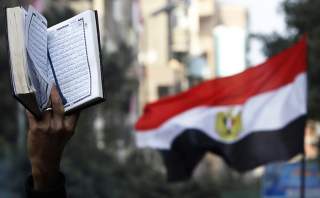 The Trump administration is evaluating designating the Muslim Brotherhood as a foreign terrorist organization (FTO), reviving a 2017 proposal squashed after rightly receiving significant institutional pushback. The designation is back on the table, but little has changed since 2017. It remains a disastrous proposal that if carried out, will backfire for several reasons.

The Muslim Brotherhood isn’t one thing. When we talk about the Muslim Brotherhood, many imagine Egypt’s flagship branch, but the proposed blanket designation will affect branches from Morocco to Indonesia. This is the biggest challenge to a designation. Far from a cohesive, coordinated transnational bloc, today’s Brotherhood is a fragmented, decentralized movement whose country branches have long revised and relaxed their ideological and organizational influence under Egypt’s founding Brotherhood. In some cases, designation would criminalize allies with whom we share interests: affiliates in Morocco, Tunisia, Turkey, Bahrain, Kuwait and Jordan, some of which are expressly pro-American, and most of which have remained engaged in joint counterterrorism efforts. Any designation should thus be undertaken on a case by case basis, as was done with Hamas in 1997.

Most affiliates don’t meet the criteria. In identifying designation candidates, the State Department’s Counterterrorism Bureau examines “actual terrorist attacks that a group has carried out,” but also, “planning and preparations for possible future acts of terrorism,” as well as “the capability and intent to carry out such acts.” Some Brotherhood affiliates have drawn ire for failing to condemn, even passively condoning, acts of terror. However, this doesn’t meet this legal standard, for good reason. Terrorist labeling is so often politically weaponized, making accusations of abiding terrorist sentiment too subjective to serve as concrete legal bases. In this very vein, adding the Brotherhood to the watch list subjects the designation process to our value judgments and political whims, undermining the legitimacy of existing designations.

For what it’s worth, the Brotherhood doesn’t meet academic requirements of terrorism either. Active credit-claiming is a crucial component of terrorism and political violence. An attack provides perpetrators more dividends when it is attributed to them and the damage is significant enough to move a public. That most Brotherhood affiliates disavow attacks, shows most of them do not consider terror an acceptable mode of political claim-making.

In this way, an FTO designation would also impose material costs, wasting U.S. resources by channeling them away from proven threats—resources that are limited to boot as the U.S. retreat from the Middle East and Africa continues apace.

It threatens U.S. commitment to democracy. Like them or not, many Brotherhood affiliates are undeniable expressions of popular will and important checks on authoritarian power. It’s true that the Brotherhood and its various incarnates regionwide have shown varied, contingent commitment to democracy, moderation and reform. But as countless experts have shown, these variations are less rigid dogma than pragmatic and adaptable responses to domestic considerations. Questionable doctrinal commitment to democracy notwithstanding, Brotherhood affiliates are among the most formidable watchdogs over entrenched autocracies reticent to make their institutions transparent and hold free and fair elections. Designating their foremost challengers would subvert this healthy dynamic.

Adding the Brotherhood to the watch list would further undermine our claims to democratic values by cementing the U.S. stamp on the brutal autocratic regimes of Saudi Arabia, the United Arab Emirates and Egypt, whose interests would be more served than even our own by an FTO designation. Their push for a designation is motivated by their efforts to maintain power rather than a desire to curb terrorism and radicalization—the persistence of which actually strengthens these regimes.

They argue, for their part, that the Brotherhood’s religious ideology is threatening to the modern nation-state, and is part of the same movement as Al Qaeda simply because both “envision societies grounded in Islam.” This is absurd. In reality, among the Brotherhood’s foundational tenets is the recognition of the nation-state, borders and the attendant notion that societal/institutional reform efforts must be gradual and accommodate the prevailing political system—all of which the Islamic State and Al Qaeda affiliates reject on premise and use as grounds to go after the Brotherhood itself.

Furthermore, aligning with this trifecta would position the United States against the Turkey-Qatar axis, miring the United States in a regional power-struggle that consecutive administrations have sought to deftly navigate. The United States also risks emboldening the antidemocratic impulses of even its “softer” authoritarian allies, like Morocco, Jordan, Bahrain and (for years) Algeria, which have long sought to co-opt and marginalize domestic Islamist opposition, despite selectively tolerating and including them.

It would proscribe healthy spiritual expression and social mobilization. Brotherhood affiliates regionwide undertake a range of charitable activities, political mobilizations, social activism and educational programs. Often, they constitute the most far-reaching and diffuse sources of aid, social services and development, as well as spaces of personal development and spiritual outlet. A designation could circumscribe (even cut off) these services which are all some citizens have in the absence of sufficient state infrastructure (and accounts that Islamist charitable outreach is solely to feed movement infrastructure, or only to buy votes or loyalty have proven overblown according to several social anthropologists who have observed the movement firsthand). Closing these spiritual spaces would leave adherents without an outlet, and it may also affirm the dangerous worldviews of the Islamic State, Al Qaeda, and their affiliates: that peacefulness is not rewarded, that violence is the only effective mode of political/religious claim-making.

Moreover, it could isolate Americans with any affinity with the Brotherhood school of thought and criminalize the activity of domestic religious or charitable organizations that have any relations with the group. This could worsen the experiences of marginalization and monitoring to which Muslim-Americans are disproportionately subjected—experiences that again serve extremist narratives that “the West” can’t be a true home to Muslims and have thus been identified as among the drivers of radicalization.

It would devastate our diplomatic options. The United States would relinquish the diplomatic flexibility necessary for dialogue with an important religious player in the region. There may be some who believe that designation, if used as a bargaining chip, would enhance rather than compromise U.S. bargaining power; for instance, with the Palestinian Liberation Organization (PLO) and the Irish Republican Army (IRA) positive negotiations with the United States were rewarded with removal from the watch list, effectively eliciting movement moderation. But this is a deeply flawed analogy; what is the behavior we are negotiating down when we know that the vast majority of Brotherhood branches do not organizationally employ violence to extract concessions, and don’t even coordinate attacks?

I share with others the misgivings about the Brotherhood’s religious chauvinism and views on religious minorities, but it would be dangerously misguided to designate whoever offends our sensibilities, satisfying as it might be. For those arguing their illiberal views could translate into policy, our ability to challenge and negotiate on this front is precisely the thing we’d forego if we designate.

In fact, the U.S. government has declined to designate the Afghan Taliban—which meets designation criteria—precisely because it would preclude any peace negotiations. The threats to local development and diplomacy are among the reasons several Nigerian NGOs and the Nigerian government opposed the 2013 designation of Boko Haram. Given that the Muslim Brotherhood’s massive size and clout spans several continents, we cannot afford to sideline diplomacy with only legal and military measures left at our disposal.

Additionally, as U.S. foreign policy is shown to have the potential to alter local political dynamics within a given country, the designation may reshape domestic landscapes—how states, their polities, religion and political actors interact—in unforeseeable ways.

Vish Sakthivel is a PhD Candidate at Oxford University and a Fellow at the Foreign Policy Research Institute. Her research focuses on political Islam, democracy and authoritarianism in Algeria and Morocco. Twitter: @HindiafMaghreb.