Diplomacy or Revenge? Iran’s Retaliation Against Israel Could Scuttle Talks with Biden 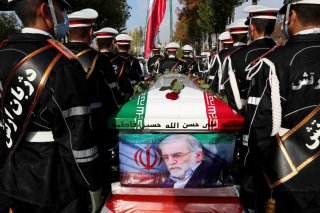 The Trump administration’s “maximum pressure” and Israel’s intelligence operations have created a situation where President-elect Joe Biden can proceed to the negotiating table from a position of relative strength. Simultaneously, the Iranians are at a serious disadvantage—not just because of the increasing financial pain caused by renewed sanctions, but also on account of how the weakness of the Islamic Republic has been laid bare. The Iranians cannot afford to reject negotiations but, more importantly, they cannot negotiate without leverage, which means we may see a period of conflict before diplomacy.

In an interview with Thomas Friedman of the New York Times, Biden said he wants to first get back to the Obama administration’s 2015 nuclear deal, the Joint Comprehensive Plan of Action (JCPOA), before then having talks with Tehran over its ballistic missiles and malign role in the region. Meanwhile, Iranian president Hassan Rouhani rejected a parliamentary bill that would have suspended UN inspections and boosted uranium enrichment, calling it “harmful” to diplomatic efforts aimed at restoring the JCPOA, which would provide the country with respite from renewed sanctions by the Trump administration. It is unlikely that Rouhani would have taken such a public stance if he did not have some assurances that the incoming Biden administration was going to return to Obama’s nuclear deal. While Rouhani prepares for a second round of diplomacy with the incoming Biden administration, there is a consensus and pressure in Iran to retaliate against Israel.

Rouhani on November 28 accused Israel of being behind the assassination of its top nuclear scientist, Mohsen Fakhrizadeh, and said that his country would retaliate at “the proper time.” Perhaps his most significant remark was when he stated that, “Our people are wiser than to fall in the trap of the Zionist regime (Israel).” Separately, in response to the killing, Rouhani’s boss and the country’s supreme leader, Ayatollah Ali Khamenei, said in a Twitter thread that Iran would prioritize the plugging of the holes in the country’s compromised security net and carrying on the research that the slain scientist was working on.

Of course, there are loud calls for retaliation from the other usual suspects in the Iranian political establishment but those are par for the course. What is noteworthy is that the talk of revenge is being downplayed by Iran’s two top leaders. This was not the case when Iran’s single most important military commander, Major General Qassem Soleimani, who headed the overseas operational arm of the Islamic Revolutionary Guards Corps (IRGC), was assassinated in a U.S. airstrike at the start of this year. This a significant difference and it has to do with timing.

When Gen. Soleimani was killed it was not clear whether President Donald Trump would secure a second term in office. Actually, Tehran was calculating that Trump would likely be re-elected and that they would have to deal with his “maximum pressure” policy for a while longer before any negotiations could be had. In sharp contrast now, Joe Biden will be taking the oath come January 20, 2021, and he has already clearly stated that he will be engaging Iran in fresh negotiations towards a version 2.0 of the nuclear deal. There are even indications that backchannel conversations may have already begun.

Prior to Fakhrizadeh’s assassination, the Iranians through their Iraqi proxies were telegraphing their desire to get to the Biden presidency without incident. Soleimani’s successor, Brigadier General Esmail Ghani was dispatched to Baghdad to make sure that pro-Iranian militias refrained from activities that might provoke military action from the outgoing Trump administration. Clearly, the killing of the nuclear scientist who was also an officer in the IRGC has upset the Iranian calculus. Tehran’s leadership finds itself between a rock and a hard place.

The most important thing for Iran is to secure a respite from sanctions, but Tehran cannot just simply come to the table after sustaining such a major hit. Tehran’s national security elite is likely engaged in an intense debate. There will be those who, like Rouhani, will be arguing that Iran needs to avoid the temptation to respond so as not to threaten the potential for diplomacy.

Other more hawkish elements are likely arguing that there is no guarantee that the talks will happen, and in the meantime, no response telegraphs weakness on their part. These elements are emphasizing that a response would actually help Iran negotiate from a position of relative strength. Therefore, we can expect the Iranian military to be examining options that involve striking at Israel. But their conundrum is how do they do so without jeopardizing the chances of talks with the United States.

The incoming Biden administration can benefit from the policies of his soon to be predecessor as it plans to engage in diplomacy with Iran. Sequencing the return to the nuclear deal before negotiating the other equally (if not more) critical issues will be a miscalculation. In addition, the president-elect does not assume office for another seven weeks. During this time, he has to consider that the Iranians can be expected to make their retaliatory move.

Dr. Kamran Bokhari is the Director of Analytical Development at the Center for Global Policy (CGP). Dr. Bokhari is also a national security and foreign policy specialist at the University of Ottawa’s Professional Development Institute. Bokhari has served as the coordinator for Central Asia Studies at the State Department’s Foreign Service Institute (FSI). Follow him on Twitter at @KamranBokhari.