Does Russia Have Red Lines in Syria? 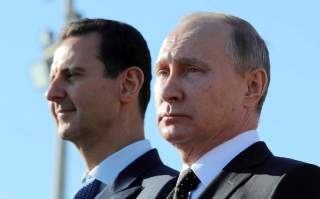 The recent Turco-Russian agreement in Sochi, while elevating Moscow’s role as one of a decisive power broker, formalized the waning American presence in northeast Syria. With the agreement, the presence of the Russian military and the Damascus military extends across the east of the Euphrates River, a first since 2015. Although the Sochi agreement is seen as another victory for Putin (who aspires to revive the glory days of the Soviet Empire) what comes next may potentially be detrimental to his grandiose plans.

Upon Syrian president Bashar al-Assad’s official request, Moscow’s military involvement in the Syrian civil war began in September of 2015. The goal of propping up Assad and helping him regain lost territories west of the Euphrates River, except the Turkish-held Afrin, Jarablus and Al-Bab, was widely achieved with Russia’s overwhelming airpower, indiscriminately bombing and obliterating such rebel-held cities as Eastern Ghouta, Eastern Aleppo, Palmyra, and Homs. An estimated thirty-four thousand sorties had destroyed more than ninety-six thousand targets by the end of 2017. In the two-year air campaign, Russian infantry involvement remained minimal and at the advisory level on the ground. However, the recent Sochi Agreement changed this. According to the fifth clause of the agreement, Russian-Turkish and Russian-Syrian joint patrols will be held along the Turkish border. It means increasing the number of Russian boots on the ground. For the first time, Russian soldiers will begin patrolling east of the Euphrates, outside of their comfort zone. This should worry Moscow.

If there is one thing that could make Russian president Vladimir Putin lose sleep, then it is the eruption of an Islamic independence insurgency, particularly in the Chechen dominated the Caucasus region, which in the 1990s, taught Russia serious lessons. Justifying indiscriminate airstrikes, Putin said in 2015, “More than 2,000 fighters from Russia and the ex-Soviet republics are in the territory of Syria. There is a threat of their return to us. So, instead of waiting for their return, we are better off fighting them on Syrian territory.” In 2017, this number was believed to be around four thousand. Russia’s increasing infantry military footprint across Syria inevitably increases the chances of attacks against its soldiers. The Syrian armed forces are now depleted after an eight-year war in Syria and are in no position to reintroduce Damascus’ authority to the remote areas of the country. Thus, Moscow will likely send more troops. This means that it will be even more likely that Russian military personnel will be exposed to attacks. It should take only one highly publicized IED attack and several Russian casualties for Putin to begin to be pulled into a downward spiral, reminiscent of 1980s Afghanistan and 1990s Chechnya. One must keep in mind that such a predicament may trigger another insurgency back home where already the restless Caucasus region is a pressure cooker kept in check by Putin’s cronies, such as Ramzan Kadyrov. Evidently, Putin must be aware of this since his choice of infantry for joint patrol along the Turkish border is three hundred Russian military police from the Chechen region. Finally, it is anybody’s guess how propping up Syria’s Shia dictator will work out when utilizing soldiers from Russia’s most hardcore Sunni region. Its repercussions at home are yet to be seen.

Increasing and continuous involvement in Syria is also going to incur a financial burden, draining the already faltering Russian economy. With Syria’s oil fields in the Deir ez-Zor region now under American control, Putin doesn’t have much left in Syria to offset the cost. He cannot rely much on his ally Iran either. With its ailing economy taking its toll at home, Tehran is estimated to have spent between $6-8 billion annually to ensure the survival of Assad. This has been manifested in Iranian protestors chanting “Get out of Syria! Think about our plight!” Moscow has had to cut education, health care and other social funds at home to support its war in Syria. Besides Syria, since 2008, Russia has engaged in costly militarily interventions in Georgia, Ukraine, and Crimea. For instance, in Crimea, the Kremlin has invested in excess of $5 billion in infrastructure projects, including roads, hospitals, and schools. Furthermore, Putin has poured funds into Venezuela to keep Nicolas Maduro in power in an effort to not lose Russia’s investment there, which is estimated to be around $25 billion.

Those campaigns and great-power aspirations are not the only things that have incurred material costs on the Russian economy. Analysts at Bloomberg Economics estimate that sanctions, particularly those due to the invasion of Crimea, have knocked as much as 6 percent off Russia’s economy over the past five years. All these have begun to negatively impact Putin’s legacy at home. Deteriorating economy, corruption, dismal demographic realities, and rising pension age prompted Russians to take to the streets. Particularly striking is that in September, Putin’s United Russia party suffered major losses in the election to the Moscow city parliament. And, it came despite the widespread crackdown on the opposition. Early this year the poll conducted by the Russian state Public Opinion Research Center put the public trust in Putin as 33 percent, which is the lowest level since 2006.

The recent American withdrawal from northeast Syria and the subsequent Russian spillover into the region have reinforced the notion that Putin is “the new Sheriff in Syria.” He appears stronger than ever. Unfortunately, having stretched thin in its great power aspirations, Russia may have reached its limits in Syria. Thus, Donald Trump’s decision to withdraw American troops may usher in an era of endless Russian wars.