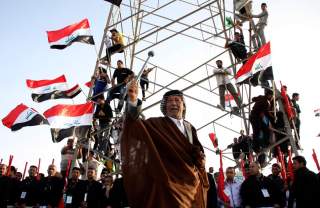 Since U.S. troops completed their withdrawal from Iraq in 2011, American policy towards Iraq has focused narrowly on militarily defeating the Islamic State in Iraq and the Levant (ISIL), with little attention to spare for Iraqi domestic politics. This has been a mistake. Pressing U.S. foreign-policy concerns, like the recent North Korea and NATO summits, have likely diverted policymakers’ attention from the results of the Iraqi parliamentary elections on May 12, and the subsequent efforts to form a coalition government. Yet the Iraqi election represents an opportunity for U.S. engagement that could contribute to three of America’s key strategic concerns in the region: defeating ISIL, countering Iran’s regional influence, and reducing regional instability.

The complex negotiations around government formation in recent years have had critical long-term effects on Iraq’s domestic stability. After U.S. troops withdrew from Iraq in 2011, Prime Minister Nouri al-Maliki’s government began to sectarianize government institutions to the benefit the Shi’a majority. This could be seen most acutely in the Iraqi Security Forces (ISF). For instance, in 2010 the ISF was about 55 percent Shi’a, but that number grew to 95 percent by 2014. ISIL then exploited the ensuing rise in sectarian tensions to gain local support. The fact that the United States supported Maliki’s bid for prime minister in 2006, and therefore inadvertently helped to lay the groundwork for ISIL’s dramatic surge in 2014, suggests that U.S. officials should be more strategic in their choice of candidates.

Furthermore, opposition within Maliki’s government was also a critical factor in the Obama administration’s decision to not renew the Status of Forces Agreement in 2011, ensuring there would be no residual U.S. troop presence when ISIS appeared in force. The problem is that the composition of the Iraqi government moving forward will influence whether the United States can continue to partner with the ISF as it has in the fight against ISIL. Therefore, a future government that refuses U.S. military cooperation could threaten the hard-won gains made by the Iraqi armed forces against ISIL, with the assistance of outside forces, since 2014. In addition, another government with an overtly sectarian outlook could generate the same polarized sectarian conditions that aided the rise of ISIL and other extremist groups.

Iran has been able to increase its stature in the region by building close relationships with some senior Iraqi government officials and Iraqi militias fighting ISIS. From Iran’s perspective, Iraq is an important new ally given the history of enmity between the Iranian government and Saddam Hussein’s Iraq and the Iran-Iraq war. As U.S. sanctions against Iran are reintroduced after the U.S. withdrawal from the Iran nuclear deal, Iraq will likely become even more important to Iran as a conduit providing access to markets and trade routes.

The big winner of the elections was Moqtada al-Sadr, a radical Shi’a cleric whose electoral list won a plurality of votes. Sadr is best known for leading the Mahdi Army, a Shi’a militia that attacked U.S. forces in Iraq and committed atrocities against Sunni civilians in the early years of the U.S. invasion in Iraq. While Sadr has historically worked with Tehran, he ran in this election on a nationalist platform opposing Iranian (and American) influence in Iraq. Sadr also made an effort to reach out to Saudi Arabia and the UAE, Iran’s major regional opponents, in the lead-up to the election in an attempt to dilute Iran’s influence in Iraq. Given his shifting political alliances and historical links to sectarian violence, Sadr is not an ideal choice from the U.S. perspective, but many analysts see him as a better option than groups like the Fatah alliance that support more direct engagement with Iran.

Finally, in a surprise move, Sadr recently announced that he will try to form a coalition government with both Fatah and current Prime Minister Haider al-Abadi. Still, talks to form a new government—which will include negotiations over who will serve as prime minister and which blocs control the most important government ministries—will likely take weeks if not months. This allows U.S. officials the opportunity to engage in diplomatic outreach to support the government formation process in Iraq. The jockeying for a position in the coalition government that inevitably follows Iraqi elections marks a dangerous period for Iraq’s stability but also provides an opportunity for the United States to engage constructively with Iraq’s future leadership, work to prevent the reemergence of extremist groups like ISIL, and push back against Iranian influence in Iraq.

Alexandra Stark is the Security & Defense Fellow at Young Professionals in Foreign Policy (YPFP). She is a PhD candidate in International Relations at Georgetown University. Her dissertation research analyzes the conditions under which countries in the MENA region are likely to intervene in civil wars. She also holds an MSc from the London School of Economics and a BA from Wellesley College, where she was a fellow of the Albright Institute for Global Affairs.

Image: A supporter of Shi'ite cleric Moqtada al-Sadr takes part in a rally, which the participants said was against sectarianism and injustice, in Kut, 150 km (93 miles) southeast of Baghdad, March 16, 2013. REUTERS/Wissm al-Okili (IRAQ - Tags: CIVIL UNREST TPX IMAGES OF THE DAY)