Don’t Withdraw from Syria Just Yet 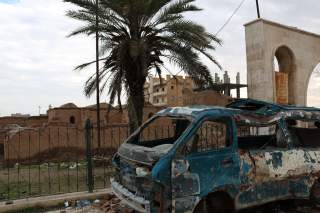 President Donald Trump: I appreciate your desire to bring our troops home from Syria. The Islamic State is indeed nearly defeated in Syria, for now, and you are right to not want an open-ended presence in the country. However, a U.S. withdrawal now would put the very allies with whom we defeated ISIS in Syria at grave risk. As you well know, Turkey is threatening to invade the Syrian Democratic Forces (SDF), who did the hard work of defeating ISIS, giving thousands of lives to do so. The world should be grateful to the SDF for this effort rather than punishing them for it. Additionally, if we leave now there is a significant chance that war could break out in the area. There would be no better opportunity for ISIS to regroup than extended chaos in northern Syria.

Earlier this month, I had the opportunity to travel to northeast Syria to look at efforts to preserve archaeological and historical sites in the area. I was not planning on writing about politics, but I feel compelled to speak out now. The political project in northeast Syria, called the Autonomous Administration or the Democratic Federation of Northern Syria, is not perfect—nothing is. However, it is by far the fairest, most tolerant political project to hold power in Syria in recent memory. The diversity of the area—linguistic, ethnic and religious—is being preserved and promoted. Three languages—Arabic, Kurdish and Syriac— greet visitors as they arrive. This is unprecedented in Syria, where Arabic has traditionally been imposed on all Syrians regardless of their native language. Power is shared between Arabs and Kurds, Christians and Muslims, men and women.

If Turkey invades the area east of the Euphrates River now, we can expect a humanitarian disaster. When Turkey backed Syrian rebels to take over the area of Afrin in northeastern Syria it unleashed a shocking campaign of ethnic and religious cleansing. President Recep Tayyip Erdogan speaks in explicitly ethnic terms when discussing Syria—he sees only Arabs and Kurds and Turkmen, not human beings. He intends to drive a wedge between ethnic communities, if his rhetoric regarding “terrorist Kurds” is any indication.

President Erdogan’s assertion that the Syrian Democratic Forces are terrorists is absurd. Calling them so deprives the word of all meaning. They have defeated the terrorists with no help from him. He was not concerned about terrorism when his government allowed jihadists from all around the world to travel freely through Turkey to join the fight in Syria and fuel groups like ISIS and Al Qaeda. Any campaign of Turkey’s to remove the Syrian Democratic Forces from northern Syria will rely on jihadist groups that are only marginally more moderate than ISIS itself. Turkey-backed rebels looted and pillaged the majority-Kurdish area of Afrin while Turkish troops watched. This is in stark contrast to what the Syrian Democratic Forces did when they took over majority-Arab cities like Manbij and Raqqa—they worked hard to establish order. I was just in Raqqa; the situation is still tense, with ISIS cells lurking about at night, but the security officials are working for the people. In Afrin they are engaged in ethnic and religious cleansing.

Northern Syria is an incredibly diverse area: Arabs, Kurds, Turkmen, Syriac and Armenian Christians all live side-by-side, in tolerance if not always in perfect harmony. A Turkish-backed invasion of the area will threaten this diversity existentially. Armenians in the area mostly came fleeing the Armenian Genocide during World War I. They fled from Turkey and were protected by local Arabs in places like Raqqa. They rebuilt their lives from scratch. They became an integral part of society. If Afrin is any indication, they will not survive a Turkish incursion into the area. Another Christian community, the Syriacs, still speak the language of Christ. These communities barely survived ISIS. The groups Turkey used to invade Afrin in Syria’s Kurdish-majority northwest destroyed Yazidi religious sites and called on “atheist” Kurds to repent or lose their heads. Can we reasonably believe a Turkish incursion into northeast Syria will involve groups looking to preserve the patchwork of religions and ethnicities in the area? Almost certainly not.

A political deal that respects Turkey’s border and guarantees security for our allies in the SDF is possible, and this would allow us to leave Syria. But we could not have defeated ISIS without the SDF, and abandoning them now would be an affront to that effort, which is still unfinished. There is still work to be done to ensure that ISIS cannot regroup. President Trump, we don’t need to be in Syria forever. But we can’t leave just yet.

Samuel Sweeney is a former Congressional staffer and is now a writer and translator based in the Middle East. He has a Master’s Degree in Islamic-Christian Relations from l’Université Saint-Joseph in Beirut.

Image by Samuel Sweeney taken in Raqqa on December 11, 2018. A bombed van in front of Qasr al-Banat, a historic site in Raqqa dating to Harun al-Rashid's caliphate which also used Raqqa as its capital, from 796 to 809 AD.