Drone Strike Spillover: Why the Assassination of Suleimani Could Create a Crisis for Israel 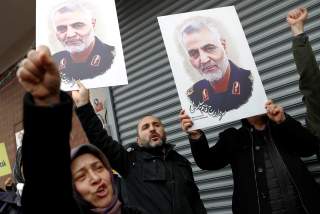 The chances of military escalation between Israel and Iran have steadily risen in recent months. Israel has struck Iranian targets in Syria and Iraq; Iran has retaliated. Meanwhile, Russia has done little to actively minimize Iranian presence in Syria while trying to limit Israeli freedom of action. The longer these dynamics continue unabated, the more likely a confrontation between Israel (probably backed by the United States), Iran and its proxies, Hezbollah, the Syrian military, and perhaps even Russian forces might seem. In the aftermath of the U.S. assassination of Suleimani, Iranian Quds Force Commander—these chances might even increase. This creates the possibility of an unintended escalation—such as the one Israel had already experienced in the past.

However, Iran, Syria and Russia are rational, avoid unnecessary risks, know how to differentiate between vital and ad hoc interests, and are sensitive to all forms of American and Israeli power tools. They can be deterred from reacting to Israeli and American actions relating to Syria, and perhaps even from using Syria to respond to the killing of Suleimani. However, rolling them back from preserving their mere presence and influence in Syria might prove harder.

Russia has warned Israel not to conduct airstrikes in Syria and has transferred sophisticated surface-to-air missiles to the Syrians to bolster its threats. Russia has even deployed its own advanced air defense systems in Syria.

But Russia probably understands that targeting an Israeli airplane, let alone an American one, might have grave consequences. A military escalation might eventually weaken Russia’s regional allies, thus jeopardizing its basic aspiration for competing with the United States in the Middle East and translating military successes to political and economic ones.

American leverage and sanctions can drive this point home for Moscow. Though the Russians have become aggressive and bold, they are not omnipotent. The United States should regard the Middle East as another facet, albeit minor, of the great-power competition with Russia. By doing so, the Russians can be deterred.

The Syrian regime has also been under the influence of Israeli and Western deterrence for years. Syrian air defenses have tried several times to shoot down Israeli airplanes, even succeeding once. But they also understand the fragility of their sovereignty. They know it can be endangered by military conflict with Israel, let alone with the United States. And they fully understand their military inferiority. They are already deterred and can be made even more reluctant to enter a military escalation.

The Iranians and their proxy, Hezbollah, have become bolder and might seem undeterred. In September 2019, Hezbollah carried out a rare attack on an IDF vehicle. The Iranians shot down an American drone, conducted a precision-guided-missile strike against oil facilities in Saudi Arabia, damaged western tankers, probably directed attacks against American facilities and personnel in Iraq, and began retaliating against Israeli strikes in Syria. Perhaps they mistakenly concluded they had deterred the United States and therefore were surprised by the targeting of Suleimani.

But Iran and Hezbollah avoid unnecessary risks. Israel has conducted numerous strikes in Syria in recent years, damaging Hezbollah and Iranian facilities and arms, occasionally even killing their personnel. In most cases, there was no military response. Of the few attempts to respond, most either failed or were foiled. Regarding Syria, therefore, they have already been deterred—by punishment and denial. This can be augmented further.

The leadership in Tehran is rational and cautious, even when violating the JCPOA. But Iran is not omnipotent; it understands the limits of its power and appreciates American and Israeli hard power. A grand war with Israel over Syria, or a provocation that unleashes American forces, might jeopardize its basic national security imperatives, including maintaining nuclear capabilities and reviving the economy.

True, the imperative to revenge the death of Suleimani and to restore deterrence—at least towards the United States—is now a major factor in Iranian decisionmaking. But even this calculus will likely be influenced by cost-benefit thinking. The domestic problems Iran and Hezbollah face have not disappeared since the death of Suleimani.

The Iranians, Syrians, Hezbollah and Russians act rationally, pragmatically, and carefully. Even if the Iranian regime is revolutionary and Russia is considered autocratic, they nevertheless employ professional risk management and structured decisionmaking. Iranian and Shi’ite presence in Syria is important for them but not necessarily a national security imperative. They can be deterred from entering a military confrontation with Israel, which will probably continue to defend its own (and even American) interests related to Syria.

An unintended escalation in Syria may be probable but it is not predetermined. It can be averted and avoided through robust American and Israeli deterrence. In the aftermath of the assassination of Suleimani and the Iranian search for retaliation opportunities, this deterrence campaign should be augmented, preferably with U.S.-Israeli coordination.

IDF Col. (ret.) Itai Shapira is former Deputy Head of the Research and Analysis Division (RAD) in the Israel Defense Forces and is a Distinguished Fellow at the Jewish Institute for National Security of America (JINSA).