Ending the War in Afghanistan 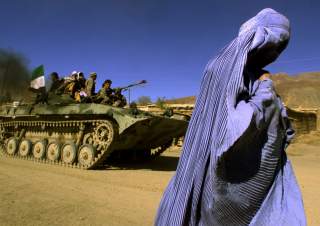 The American people have had enough. It’s time for Congress to listen.

On March 4, Senators Rand Paul and Tom Udall put forward bi-partisan draft legislation that would end U.S. military involvement in the war in Afghanistan. The proposed joint resolution gives the Trump administration forty-five days to present a plan for the orderly withdrawal of U.S. military personnel from the country. In keeping with a tradition going back to the Revolutionary War, some three million men and women who have deployed in support of all wars launched after 9/11 will receive a cash bonus of $2,500. Lastly, the resolution stipulates that all U.S. armed forces will be withdrawn from Afghanistan within one year of its passage.

The case for such a move is simple and straightforward. The U.S. military has achieved its core objectives spelled out after 9/11. Bin Laden is dead. Al Qaeda is crippled. The Department of Defense reported last June: “The Al Qaeda threat to the United States and its allies and partners has decreased and the few remaining al Qaeda core members are focused on their own survival.”

As the New York Times’ editorial board recently noted, additional desirable war aims included “to build an Afghan government that can stand on its own, protect the population and fight off its enemies” but that it “may not be achievable, and certainly [isn’t] achievable without resources the United States is unwilling to invest.”

Not everyone agrees. Last month, for example, Senate majority leader Mitch McConnell pushed through a very different resolution, one that opposed any troops withdrawals from either Afghanistan or Syria. McConnell has previously attempted to block floor debate over whether ongoing military operations are covered by the Authorization for the Use of Military Force (AUMF) passed immediately after 9/11, as well as the AUMF related to the war in Iraq.

The contrast between these two approaches to the nation’s wars couldn’t be starker. One takes account of the fact that the original rationales for going into Afghanistan have been satisfied, the other refuses to. In addition, the Paul-Udall resolution is consistent with the wishes of the American people, 61 percent of whom support withdrawal, whereas advocates for war-without-end openly defy public sentiment. The latter should explain why the American people’s views are irrelevant.

Some commentators claim that terrorists will interpret any withdrawal as a sign of American weakness and an excuse to attack again. According to this view, so long as any prospective terrorist, anywhere in the world, is contemplating an attack on the United States, U.S. troops must remain on foreign soil. “They will never lay down their arms,” explained former Bush speechwriter Marc Thiessen in a Washington Post column. “In this war,” he continued, “victory for the United States is every day that passes without a terrorist attack on American soil. And that daily victory is made possible because the men and women of the U.S. military are hunting the enemy in faraway lands.”

By that logic, if we can even call it that, the U.S. troops should never leave any place where terrorists have once operated—or might in the future. It is a recipe for war unbounded by either geography or time.

None other than Osama bin Laden predicted that such attitudes would prevail in the United States. “All that we have to do,” he boasted, “is to send two mujahedeen to the furthest point east to raise a piece of cloth on which is written al-Qaeda, in order to make generals race there to cause America to suffer human, economic, and political losses without their achieving anything of note other than some benefits for their private corporations.” Bin Laden described this as a policy of “bleeding America to the point of bankruptcy.”

To the extent that U.S. foreign policy has been driven since 9/11 mostly by fears of future acts of terrorism, it has followed the terrorist leader’s playbook to the letter. We now have an opportunity to see if we’ve learned anything in the intervening eighteen years, or whether Bin Laden’s recipe for undermining American security—as well as our prosperity and liberty—will continue to live on long after his death.

Americans remain fearful of terrorism, despite the fact that we are much more likely in any given year to fall victim to bathtub drownings or accident-causing deer. Still, despite such fears, policymakers have an obligation to deploy resources wisely and to ensure that their policies don’t make an existing problem worse. And yet, that is precisely what America’s Global War on Terror appears to be doing. Terrorist organizations routinely exploit the presence of foreign troops in places like Afghanistan to find new recruits, and to rally wavering bystanders to their side.

Ending the war on terrorism worldwide, and not merely in Afghanistan, requires putting the danger in perspective. “Terrorism is a tactic, not an enemy force that can be defeated, and it knows no borders,” the New York Times’ editors noted. “It can be thwarted in certain instances, but it cannot be ended outright.”

But even those who refuse to admit such truths can apparently be convinced that war is not always the best remedy. For example, although he rails incessantly about the supposed grave terrorist threat in our midst, and seems prepared to do almost anything to arrest it, President Donald Trump campaigned on a platform of reigning in America’s costly overseas military engagements. In December 2018, he again pledged to end the wars in the Middle East. In his State of the Union address, he reiterated his desire “to reduce our troop presence” in Afghanistan. He pointed to his administration’s ongoing negotiations with the Taliban, and explained, “the hour has come to at least try for peace.” Great nations,” he declared, “do not fight endless wars.”

In this instance, President Trump is right. We know that most Americans agree with him. We’ll have to wait and see how many of their elected representatives in Congress will listen.

Christopher Preble is vice president for defense and foreign policy studies at the Cato Institute and the author of Peace, War, and Liberty: Understanding U.S. Foreign Policy, due out next month.