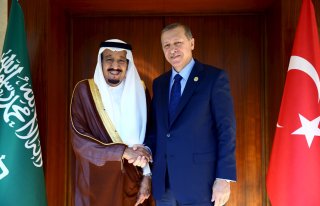 The office of Turkish president Recep Tayyip Erdogan indicated on Tuesday that Erdogan would travel to Riyadh, the capital of Saudi Arabia, for a two-day visit this week. The trip is expected to improve relations between the two countries after the fallout from the murder of Washington Post journalist Jamal Khashoggi in Saudi Arabia’s consulate in Istanbul in October 2018.

Erdogan’s visit, during which he is expected to meet with King Salman and Crown Prince Mohammed bin Salman (MbS), comes shortly after a Turkish court’s decision to suspend the trial of two dozen suspects in Khashoggi’s murder and transfer the case to Saudi Arabia. That decision was widely criticized by Turkish human rights groups and by Khashoggi’s widow, Turkish citizen Hatice Cengiz, who argued that Saudi Arabia could not be expected to conduct the trial fairly. Although the Turkish government insisted that the decision was a judicial one rather than a political one, Western experts have argued that it helped pave the way for improved Saudi-Turkish relations and led to Erdogan’s visit.

In recent weeks, Turkish foreign minister Mevlut Cavusoglu has spoken positively of a rapprochement between the two countries, telling Turkey’s state-run television network that the Erdogan administration “[does not] have a negative attitude towards Saudi Arabia in terms of normalizing relations, either commercially, economically, or politically.”

An anonymous Turkish official claimed that Erdogan was not expected to issue any public statements during the trip, according to AFP.

After Khashoggi’s murder, Turkish-Saudi relations sharply deteriorated, and within days of the murder, Turkish intelligence officials had shared a recording from the consulate with their American counterparts—disproving Riyadh’s initial claim that Khashoggi had left the consulate without incident. Both the CIA and Turkey’s National Intelligence Organization (MIT) swiftly concluded that MBS had ordered the attack, and Erdogan stated that the killing had been planned at the “highest levels” of the Saudi government—leading Saudi Arabia to launch an unofficial boycott of Turkish goods.

In recent months, however, ties between the two nations have improved amid a general easing of tensions in the Gulf. Since the election of President Joe Biden, Saudi Arabia has sought to engage regional rivals through diplomacy, holding talks with regional adversary Iran in Baghdad and ending its four-year blockade of Qatar at a Gulf Cooperation Council (GCC) summit in Al-Ula, Saudi Arabia, in early 2021.

Turkey, beset by poor economic conditions and in search of foreign investment, has also sought to improve its relations in the oil-rich Persian Gulf. Before the announcement of Erdogan’s trip to Saudi Arabia, the Turkish leader had visited the United Arab Emirates in February.