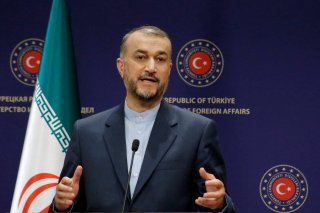 Iranian foreign minister Hossein Amirabdollahian said on Wednesday that he “welcomed” further initiatives to negotiate a return to the Joint Comprehensive Plan of Action, or JCPOA, the 2015 nuclear deal that saw the United States and other signatories lift sanctions on Tehran in exchange for sharp limits on nuclear enrichment.

“Iran welcomes the continuation of diplomacy and negotiations,” Amirabdollahian reportedly told European Union High Representative for Foreign Affairs Josep Borrell, the international organization’s highest-ranking diplomat, according to Iranian state media. The conversation came one day after Borrell proposed a new text for the agreement, which he said reflected “the determination of all … to ensure [the JCPOA’s] sustainability, including the commitment of President Joe Biden and U.S. assurances in this regard.”

Abdollahian and other Iranian officials soon indicated that they viewed Borrell’s proposal positively. The U.S. Department of State acknowledged the proposal but did not immediately comment, claiming on Tuesday that it was still reviewing it and would soon have a response.

“The United States always states that it wants an agreement, so this approach should be seen in the agreement and in practice,” Amirabdollahian said, presumably referring to the impasse between U.S. and Iranian negotiators, which has persisted for several months amid mutual acrimony. Although the basic agreement—sanctions relief in exchange for a rollback in enrichment capacity—is broadly agreed upon by both sides, the Iranian side has insisted on the removal of the Islamic Revolutionary Guard Corps (IRGC) from the U.S. list of foreign terrorist organizations, which President Joe Biden has refused to allow.

The JCPOA functioned as intended from 2015 until 2018, when former President Donald Trump unilaterally withdrew from the agreement and re-imposed “maximum pressure” sanctions on Iran. Although the sanctions damaged Iran’s economy, it soon resumed high-level uranium enrichment and is thought to now have enough highly-enriched uranium for a nuclear weapon.

Both Biden and Iranian president Ebrahim Raisi have publicly vowed to return to the deal if the other side would agree to do so as well, but both have also insisted that they would be willing to abandon it if their conditions are not met. In an interview with an Israeli television channel, Biden explicitly claimed in mid-July that he would rather see the deal fail than concede to Iran on the issue of the IRGC—a statement that Iranian officials swiftly denounced.

“If [the] window of diplomacy is still open, that’s because of Iran’s dynamic initiatives,” Amirabdollahian wrote on Twitter. “[Biden] cannot impose US’ one-sided views through accusation [and] sanction. Diplomacy is not a one-way street.”