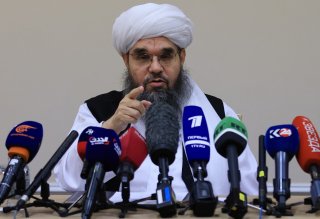 Last August, I was angry over how the United States extricated itself from Kabul and strongly disagreed with the decision to remove U.S. forces from Afghanistan. On this one-year anniversary of the withdrawal from Kabul, I still have a broken heart for Afghanistan, the other land I love. Further, I still harbor anger at the way we departed, how the United States just up and ran out on our Afghan partners and allies after twenty years of war against a truly evil enemy—an enemy that is a danger beyond the region.

This second abandonment of Afghanistan has only piled more on to the mountains of broken promises, destroyed dreams, crushed the Afghan people, particularly women and girls, and made them hostages to the Taliban again. Further eroding U.S. credibility among friends and foes in the region and erasing, in a matter of days, twenty years of small gains that could have been built upon if U.S. forces had not exited so abruptly.

Current U.S. policy only continues this abusive relationship cycle. The United States first abandoned Afghanistan after the Soviet withdrawal, and the Taliban effectively took over the country by 1996 after a bloody civil war. In the interim, Afghanistan and Pakistan became havens for terrorists determined to attack U.S. interests and ultimately carry out the 9/11 attacks. At great cost, coalition forces defeated the Taliban and Al Qaeda, thus giving Afghanistan a chance to heal and improve.

The Biden administration’s decision to abandon Afghanistan once more will lead to similar outcomes. When U.S. forces withdrew from Kabul, and the Taliban took over a second time in 2021, that decision only continued this harmful cycle, creating more misery and threats. To restore Afghanistan and U.S. credibility and ensure greater opportunities for women and girls, the United States and its allies must have a generational commitment to the Afghan people. After decades of war and terror, it is unrealistic to believe that twenty years of nation-building will fast-track Afghanistan to anything close to a stable state status. However, there are ways to give Afghanistan a fighting chance in a tough neighborhood.

First, empower women and girls. No nation can be prosperous if over half its population is denied basic human rights and loses opportunities. Specific focus must be placed on education and health care services.

Second, strive to achieve the balance between the velvet glove and the mailed fist. Know our enemies better and protect our friends consistently. Tribal dynamics and local history must be studied and respected faithfully.

Third, understand and appreciate the myriad cultures of Afghanistan. More resources should be applied to language training, understanding the diversity of Muslims, and growing a cohort of individuals who are curious about Central Asia and dedicated to rebuilding a stable future.

Fourth, avoid supporting corrupt Afghan leaders. This must be a priority. Installing unpopular leaders does more for the enemy’s credibility among the people and reinforces the narrative that the United States cannot be trusted. It is an avoidable yet proven way to undermine efforts to rebuild Afghanistan.

Finally, engage regional partners and build alliances against internal and external threats. Neighbors who are sincere in their dedication to a stronger Afghanistan should believe that a stable and resilient Afghanistan benefits the entire region.

Robert Holbert is a United States Army Veteran and the current Immersion Seminar Coordinator at the Center for Afghanistan Studies, International Programs, University of Nebraska Omaha.