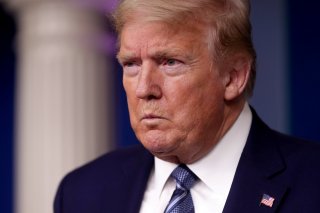 A former official in the U.S.-led provisional government in Iraq called for President Donald Trump to pursue a “regime collapse” strategy towards Iran in order to prevent an “almost inevitable war” in the Middle East.

Trump is entering what could be the last few months of his term, and a United Nations arms embargo on Iran is expiring just before November’s presidential election. Jewish Institute for National Security of America (JINSA) chief executive Michael Makovsky offered Trump a solution at a Tuesday event hosted by his organization.

“I don’t think behaving like a normal nation…is a realistic policy with this regime,” he said, referring to his recent op-ed for the National Interest. “We need to do more to hasten [its] collapse.”

Makovsky claimed that his regime collapse strategy could include a “military component,” but was careful to emphasize that he did not support a repeat of the 2003 invasion of Iraq, during which he served on the Coalition Provisional Authority.

“The aim is to ratchet up pressure on the regime to heighten the internal contradictions,” he said. “It exploits forces already at play in Iran.”

Makovsky acknowledged that he does not know what would replace the current Iranian government, and did not discount the possibility of a Libya-style civil war.

“There’s no question that a regime collapse strategy has risks,” Makovsky said. “Iran today poses a much greater risk to American interests than Libya…so I’m willing to take the risk.”

The alternative, he said, could be a bloody war involving Israel, Iran, and the Iranian-backed Lebanese militant group Hezbollah.

Former Libyan ruler Muammar Qaddafi was “a very bad man but he wasn’t really an enemy of the United States,” Makovsky added.

But the example that loomed the largest was not Iraq or Libya—it was the fall of Communism.

Makovsky compared his strategy to the famous 1947 telegram by State Department official George Kennan, which called for the United States to contain the Soviet Union and allow it to collapse from its internal problems.

He also brought up the breakup of Yugoslavia, whose Communist government fractured into several different states along ethnic and sectarian lines after a multi-year civil war.

Makovsky’s speech could signal that conservative circles feel that the Trump administration is approaching a final reckoning on Iran.

JINSA has served as an incubator for foreign policy officials in Republican administrations. Both former Vice President Dick Cheney and recently-departed National Security Advisor John Bolton served on the JINSA advisory board before working in the Bush administration.

Bolton, the architect of the Trump administration’s self-described “maximum pressure” policy towards Iran, has been an adamant supporter of “regime change.”

But the Trump administration itself has denied that its goal is regime change, even as its officials call for changes in the behavior of the regime.

Brian Hook, the State Department official in charge of Iranian affairs, said at a February event that Iran had “some of these Westphalian attributes of a state” but that is not the “true nature of the regime.”