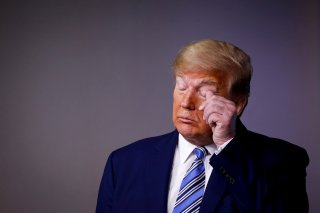 Sanctions relief will not be enough to help Iran import the goods it needs to fight the novel coronavirus, former White House official Richard Nephew argued at a video conference hosted by the CATO Institute on Monday.

A growing chorus of members of Congress—as well as Democratic presidential nominee and former vice president Joe Biden—are calling on the Trump administration to suspend its “super maximum economic pressure” campaign to allow the Iranian authorities to deal with the coronavirus pandemic. Nephew, who ran the Iran desk at the National Security Council from 2011 to 2013, argued for a more proactive approach.

“If you just simply suspended sanctions for the duration of the crisis, you potentially just create the same sorts of compliance headaches and burdens that already existed, where companies don’t know where their lines are,” he said.

Nephew instead called for a “structured approach” where the “United States engages with the corporate sector and with Iran to facilitate certain transactions and certain transaction patterns” through “comfort letters” and other assurances.

The former National Security Council official also served as a sanctions expert on the U.S. negotiating team with Iran from 2013 to 2014.

The Trump administration has argued that current sanctions law already includes “broad authorizations that allow for the sale of food, agricultural commodities, medicine, and medical devices.”

“In a normal environment, that might be enough, when you’ve got normal supply chains, normal business activity, normal banking, and normal manufacturing, and those sorts of things,” Nephew claimed. “In the context of the pandemic, all conditions and the difficulties created by sanctions are exacerbated.”

He said that the high cost of due diligence—compounded by Iran’s own clandestine sanctions-busting activities—have contributed to “an impossible compliance burden” for companies who want to maintain regular business relationships with Iran.

And a recent press release by the State Department decrying “Iran’s sanctions relief scam” may further scare companies away from trying to engage with the Iranian economy, Nephew claimed.

“Sanctions intend to interfere with normal trade. Their objective is to make normal trade and normal business activity much more difficult and much more complicated,” he added. “This is part of how sanctions can be effective.”

But the heavy use of sanctions comes at a cost. European governments recently completed the first transaction through INSTEX, a barter mechanism set up to avoid the U.S. banking system for trading food and medicine with Iran.

“The bigger problem is the possibility of de-risking from the United States altogether and the emergence of alternative mechanisms for conducting transactions,” Nephew said. “Part of the reason sanctions work is because people want to do business here. If they find ways of protecting themselves against the risks they’re perceiving…that ultimately will have an effect to use those tools and certainly on our ability to take advantage of our economic position.”